Hello there,
I’ll make this short : I’m working on this island scene, and something still looks flat in it. (don’t worry about the blue edges i’ll crop them off

) I’m thinking of adding a hammock between two of the trees.
Any comment and critique are more than welcome, and don’t be shy, tell me REALLY what’s not looking good 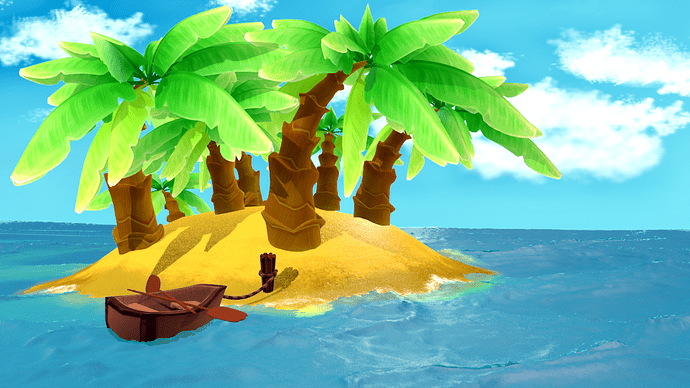 I really like it and think it captures the aesthetic you’re looking for. I think the biggest issue is the lack of contrast, esp on the leaves. The picture is very bright… and that tends to make them look washed out. I’m pretty new to 3d, but i’d assume a fix would be backing the lighting away a little bit or reevaluating its strength. also, it could be beneficial to tweak how the lights reflect off the leaves and go with a more matte looking finish.

Regarding the layout of the screen, there’s a big chunk of minimally used space in the lower right. This would be great for text or something like that, but as is, i’m not sure its doing much for your overall composition. Adding some sort of creative element here could help add interest to the whole of your project.

lodger, aaron2, thanks a lot for your feedback. Yes, i think you were right it did need some contrast so i added contrast on the leaves, and decresed slightliy the brightness, looks much better now. 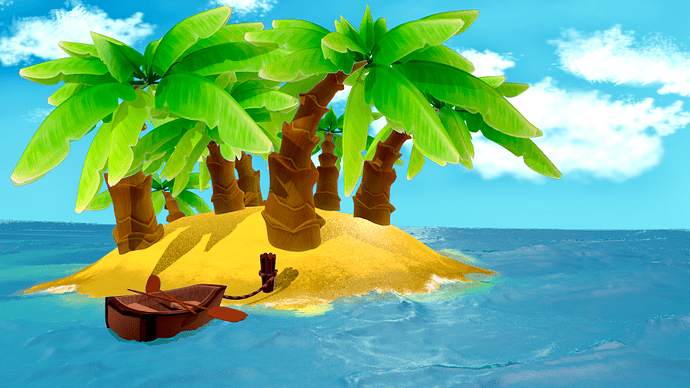 As for the “matte” looking leaves you mentioned earlier, i think that might be interesting, but how do you think I could do it ?
I’m still thinking about how i could fill the space in the right side of the image. I thought about adding one of these (i don’t know what they’re called), but would it look out-of context ? 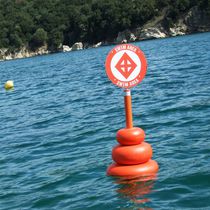 So what do you think ?

Maybe anchoring the boat on the right side would help balance it a bit. Overall, I love the theme. How did you do your textures?

that would be a good idea ill try it and upload the result
the textures have all been done in photoshop after having been unwrapped in blender, but its really basic so if you don’t have photoshop it’s no problem, you can use gimp

i hope i have been helpful . is there anything else you would like to know ?
oh and thanks for the positive feedback

Hmmm I would add something that makes the palm tree look like its in the sand, instead of it jest being “placed” there, I do like the style of the scene though

believe it or not i was just thinking of that ! I think i might add a sand texture at the base of the trees or perhaps add some particles whatever works best : Thanks a lot for the suggestion and the positive feedback, i’m honored

Ok so there you go , i added a hammock, a little ship, minor adjustments to the way the trees are “placed” in the sand, and did a little work on the horizon.
I also defocused the background and added atmospheric faloff: 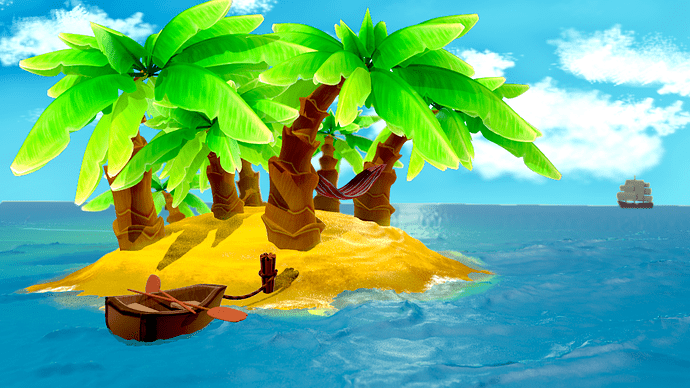 what do you think does it still need ?

Okay, so here’s one more update : added the ropes which hold the hammock, adjusted lighting, vignette effect, etc…
And rendered in better quality :

I don’t know, if you’re still working on it, but here’s what I think: The whole image looks great and the progress is very apparent, too. But at a second look I noticed the following things: The stick fastening the boat looks too even for my taste. The second thing is that the sand is looking some kind of … oily. I don’t know how to describe this but something’s bothering me about that.
Everything I mentioned is only an opinion and I’m not very advanced in Blender, but maybe it helps. Despite all this the picture is really good!

Thanks Arthelpsus. So yes, I still am working on it, and you are right about the sand, however, i don’t know how, with my present abilities in Blender, i could achieve something more realistic. (any suggestions ?) I suppose I might need particles and a photograph of real sand, but I’m not sure if my PC would be able to withstand an large amount of particles. There is also something i didn’t mention, i want everything to be original cg work. By that i mean no photos as textures (the sky for example was made in photoshop). I’m just testing my abilities to generate something where every single pixel is my own work i guess

(call me crazy ! XD)
The stick can be changed however, and i’ll change it and upload what results i get.
Anyway, thanks alot for your time, thanks for the feedback and happy holidays

The water is muuuuuuch better now, I added a rescue ring and some birds, just to give it more life.
So what do you think, what still needs to be improved ?

So what do you think, what still needs to be improved ?

An ocean horizon is in reality a perfectly straight line, instead of some irregularities being in there (caused by ocean modifier. I’m currently having the same problem with an ocean I work on, it can be done by some additional blurring in compositing. But I couldnt get it to work really well.

I think it could also be faked by applying the modifier and just smooth sculpting it towards the end of the mesh. But that wont really work for animation

I’m surprised you noticed that, because, the mesh towards the horizon really is perfectly strainght. One trick i suppose you should use is to take the last raw of verticies (in the ocean) and move them way back. Then (depending on the orientation of you scene), you sould scale this line of verticies down to 0 on the z axis. And there, you would have a straight line
I hope this helps
I don’t intend to animate it, will you animate yours ?

I’m surprised you noticed that, because, the mesh towards the horizon really is perfectly strainght. One trick i suppose you should use is to take the last raw of verticies (in the ocean) and move them way back. Then (depending on the orientation of you scene), you sould scale this line of verticies down to 0 on the z axis. And there, you would have a straight line
I hope this helps
I don’t intend to animate it, will you animate yours ?

Ah I now see its actually a straight line!
The illusion of these irregularities comes from the shading/reflections I guess but if it’s straight, (it is) thats fine

Yeah I wanted to animate mine, i already did another scene without a perfectly straight horizon some time back.
I now found a way that works for animation, though: Simply put a plane that “cuts of” the ocean at the horizon and add this as a mask layer to the oceans render layer.

well brilliant ! I was going to propose adding a displacement modifier, and tracking its texture to the camera somehow so that you can have a flat horizon, but looks like your solution is way simpler !