RLY nice addon ;] but is there any plans to give the bones aditional control or any other addon with can help define the bones more?
https://developer.valvesoftware.com/wiki/$jigglebone something like this woud be great XD
Just locking the axis woud be a guge thing !

Man, Blender developers should consider to take a closer look to this addon…

What would be great is if Blender received an official support for physics-based bones, including being moved like Jiggle Armature, with support for collisions.

According to one of Pablo’s livestreams, apparently, the devs know about it and it’s being used as well, so hopefully this isn’t a pipe dream. Bones that automatically add secondary animation is so, so useful.

Exactly! That’s why I’m afraid of losing such important feature.

Just an update for others who like what Jiggle Armature does. There’s a new, really promising add-on being developed in another thread: ghost_IK (virtual Inverse Kinematics bone system that don't need controller)(dynamic bone IK). Even collision is planned, which is a major feature Jiggle Armature lacks.

Thanks! This is really cool!

I tried ghost IK but could’nt manage to understand how it works, no tutorial videos and a chinese UI didnt helpt too much

Haha, yeah. I don’t think it’s for production usage yet. I was able to test out the sample scene by downloading the scene file and add-on and enabling the add-on.

Will there be a 2.8 version of this awesome addon?

we can only hope

hi, yes, i just uploaded a new branch , for testing, https://github.com/cheece/JiggleArmature/tree/blender-2.8
i’ll merge it to master when 2.8 becomes stable

Thanks for great addon. I have question. Is there a way to animate addon parameters like stiffness, damping, control etc.? Or there is no such ability, cause when i’m trying to paste keyframe by clicking ‘I’ while hovering jiggle armature parameter, blender says it cannot find path to this parameter.

So I tried using this build but got an error when I tried enabling it in 2.8. Something about no prefix. Thx anyway.

Thank you, I’ll get right on top of that.

I can’t even get it to appear in the add-ons menue to enable it. Please help.

Thanks Simón, been waiting for this, but like sleeper_g1, i cannot see it in the addons list.
Ive used the 2.8 branch as you suggested btw. 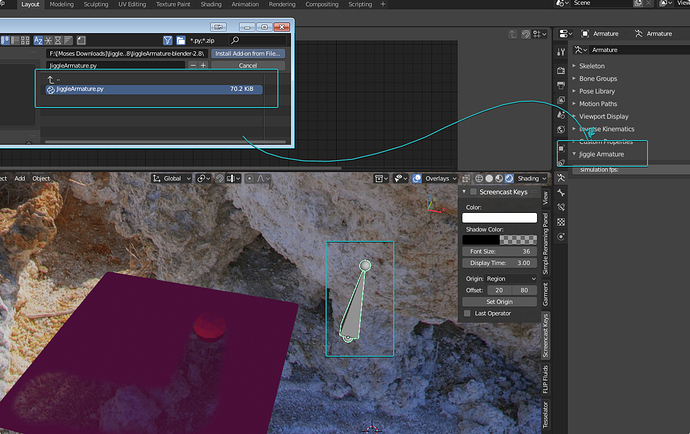 I got it to display

Instead of installing the .zip from the [addons_tab] from within the [user preferemces]
extract the content of the .zip… hit [user preferences] and navigate to the .py file… and install that