I started following the Joan of Arc Tutorial witch is found here http://www.3dtotal.com/ffa/tutorials/max/joanofarc/body2.php
I’m stuck on the 3rd image the thing on stuck on is on the tutorial the top leg and the side that need to be extruded in the tutorial are flat but on mine there rounded and when on extrude it does not looks right. how do i make it so the the bits that need to be flat are flat while keeping the sub-surf?

If you mean this flat face in the image it says scale the vertices by 0 along the x axis. Anway, you’re going to add a mirror modifier which you can use to merge the centre vertices (remember to remove the faces along the centre line)
At this early stage forget about the subdivision surface modifier, just get the basic form made.

This is what i mean Left is my blender and right is from the Tutorial mine looks really curved and rounded on the top as his in the tutorial is flat and level. 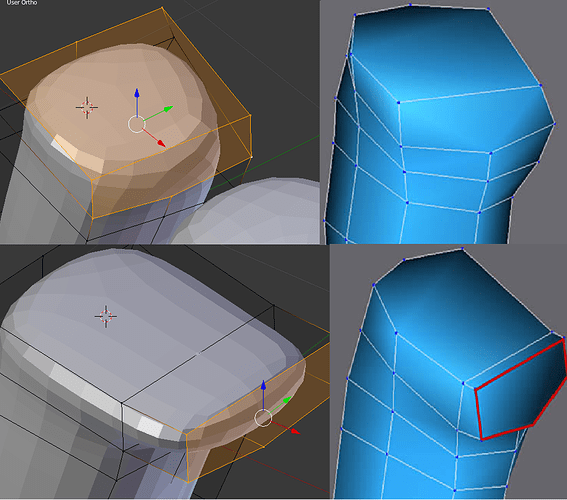 delete the face that you’ve selected, you won’t need it afterall

wow i did not see that -_- ill redo the tutorial again i think to correct a few thing see how it goes then. Thanks Sanctuary also saw you thread in your sig you made some cool looking things.