Fur pretty much done, need a little more texture work though I think. And a rig (grumble grumble)

Starting a new project, I’m going to attempt to make a photorealistic image of the pokemon Jolteon. Why jolteon? It was one of my favorites of the original 151 (because 10 year old me thought it was AWESOME!), and also, it’s design is rather hard to envision as a real animal. I thought doing a picture may help.

Here’s the model so far: With wireframe and no subdiv:

I’ve been trying to keep the body design cat-like (it always seemed more cat-like than dog-like to me). I’m pretty happy with the basic shape, although the proportions seem a bit off. With one big exception: I’m kinda stuck on the paws. Here’s a closeup of them (brace yourselves for awkward topo): I’m at a bit of a loss for where the edges are supposed to go in this. Obviously I’m going to need way more edges than is practical to try and flow up through the leg and body, so there are going to have to be poles somewhere. While the internet is long on topo examples for hands, ones for paws seem to be a bit harder to come by. Anyone have good examples of how it should flow?

For those wondering about the spikes, I’m going to do them as actual hair. After giving it a good deal of thought as to what on earth those actually are, I came to the conclusion that they are some kind of mane or ruff that had spiked out from electricity. Here’s a quick test I did, just to make sure it would work:

Finally, here’s an early clay render of the power plant environment it will be in. I’m planning to place it on the catwalk in the right foreground:

Also made a magnemite, gonna flock a few of these guys around the power plant in the background: Also, a fur rendering test. Since Cycles can’t deal with the lighting inside the power plant, and Lux can’t render jolteon’s fur worth a damn, a backup plan needs to be tried. This is fur rendered with the new cycles strand primitive, matted with holdout shaders, composited onto a Lux shot. Came out great. A lot easier to get the lighting matched up than trying to do a fur pass in BI.

Quick update before it gets to midnight here: I think the base mesh is getting close to done. The hind-paws need a few more tweaks, and I still need to add a mouth, and maybe tweak a few edges here and there. Otherwise though, I think it’s about time to get to sculpting some extra detail onto this.

In the middle of sculpting and texturing. So have a fur pass:

(yes I know the back spines are the wrong color, I haven’t gotten to that yet

Still not sure on the contrast with the facial markings, thinking it might be a bit much. Also, any suggestions for eye color?

Another hair update, and trying still ANOTHER eye color (steel gray this time):

Looking good. I would say go for hare-like ears, move them to the side a bit, make them longer etc. Face is a bit off, I think the nose should stick out more. Other than that liking it so far, power plant looks great

As a avid fan of the series, it’s looking more like a liger than an actual Jolteon. For the eyes, I think that you should make it just pitch black. The ears aren’t long enough. For the body, I think that you need to model it like a toy dog. Here’s a link to a lot pictures from Google Images to use as reference.

Hopefully, these images will help you.

As a avid fan of the series, it’s looking more like a liger than an actual Jolteon. For the eyes, I think that you should make it just pitch black. The ears aren’t long enough. For the body, I think that you need to model it like a toy dog.

That was quite intentional. The original character, being an anime character, doesn’t necessarily fit into the “real world” very well. I wanted to take a bit of artistic license, mainly by making it more cat-like.

I actually tried quite a few different designs for the ears. I think I must have changed them at every point I was working on the face. I felt the larger ears looked far too rabbit like and made the character look overly comical, which I didn’t want. I also moved the eyes more to the front of the head. I felt the more side-position in the original artwork made it look too much like a prey animal, which is not how I’ve ever envisioned it.

@tophZilzaal. Thanks for the bit about the nose, it could probably use a few tweaks. See above on the ears though. I’m aware they are proportionately smaller than the head compared to the official artwork. I decided it looked better that way.

Looking really cool! Although I have a very basic knowledge of the franchise, I think these things could improve the model.

This link to an image shows off what the joints should look like: http://images5.fanpop.com/image/photos/26000000/Jolteon-the-banner-image-jolteon-the-awesome-electric-pokemon-26027155-245-182.png

This is looking good so far, the environment looks great!

Looking really cool! Although I have a very basic knowledge of the franchise, I think these things could improve the model.

This link to an image shows off what the joints should look like: http://images5.fanpop.com/image/photos/26000000/Jolteon-the-banner-image-jolteon-the-awesome-electric-pokemon-26027155-245-182.png

This is looking good so far, the environment looks great!

Could you elaborate a bit more on the front leg? From the picture, it looks like a fairly typical cat or dog front leg, which is what I was trying to mimic. Did I miss the position somewhere? Here’s the rig, btw (just started on it, it’s not skinned yet): 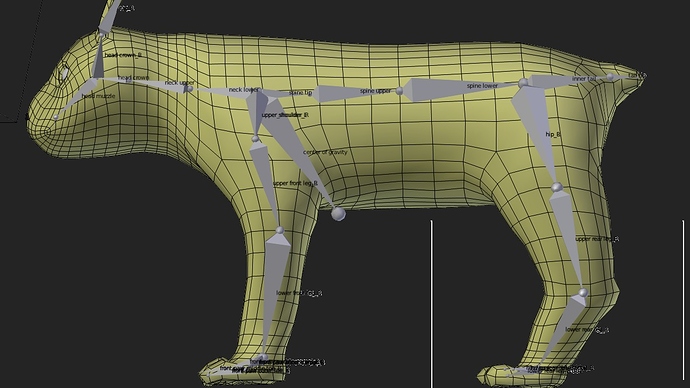 The front leg looks fine, I guess from the earlier picture it looked a little straight; good improvement on the hind leg. I took your image and pulled it around in PhotoShop; this is the shape I was trying to describe: 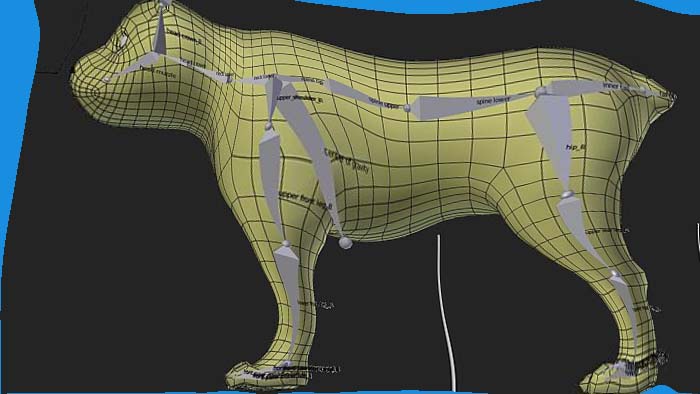