Journey into the 3rd Dimension

I’ve always wanted to take my art into new venues but never really had the motivation to sit down and learn. One day someone close to me said “Why don’t you find reasons to do rather than reasons not to, as that is far more harder” (This of course was for a different context, but it stuck to me) So I sat down and it took about 2-3 days learning the interface, what each functions primarily do (Still learning). The first picture is my “first” (in a sense complete) character model. I’m not too happy with it but it warmed my creative juices as well as taught me loads on topology as well as unwrapping and texturing… that and I NEED to have a clear concept in mind rather than just fart about pushing and pulling and slapping on photo sources since I had no idea what I wanted.

The second model was a sculpt using the base mesh created by Talon. I primarily wanted to use it to test out the sculpting functions…then I found the rendering button and Blender’s Brownie points skyrocketed. I had so much fun setting up lights and playing with all the functions. I also learnt a bit about nodes. So, what’s next? I plan on modelling a character with a more “next-gen” workflow as to what it is? I do not know yet 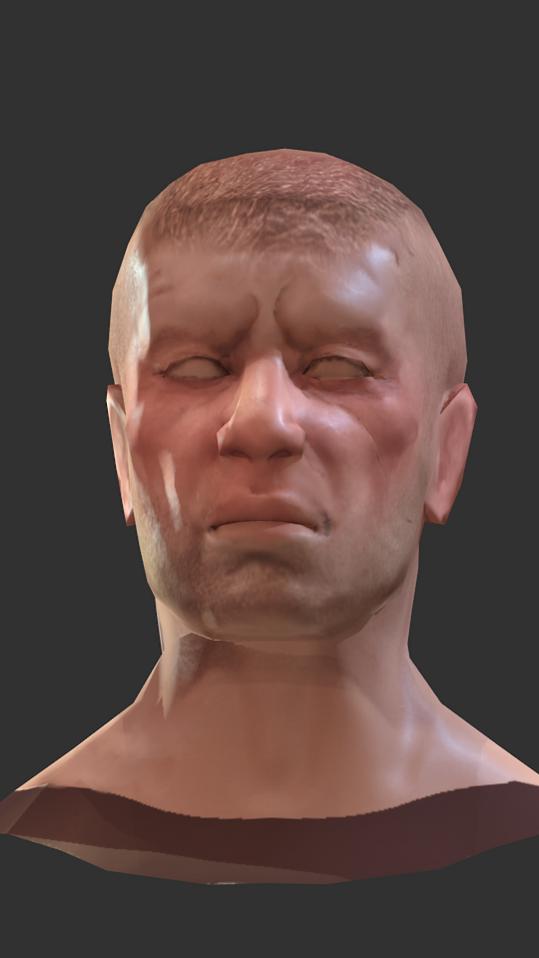 A few more renders of the head with the node set-up that I learnt on Ben Simonds site.

Playing around with the SSS and lighting situations.

Enough fooling around with the SSS stuff. I started creating a base mesh.

The model really started acting up so I abandoned that and started working on a face. I thought I should plunge into the narcissistic pool and drink from its waters to immortalize my Olympian face.

The face is very cool since it is made out of quads. Interesting work with the shaders.

Benny_Flex: Cheers mate! I started another face today to see if I could approach poly-modelling a different way.

Lesson Learnt: Don’t start to little since it will bite you back in the future. Getting a little hard to work with, but I’ll motor on.

Wow!!!What you learnd in 2-3 day I am still having problams with after 3 month
Congratulations!

Bahamapascal: Cheers! A lot of people say if you have a solid 2d background you can easily translate it over to 3d. It took some time for me to understand the foundation of 3d. Topology, edgeflow, poly distribution (things I’m still studying hard). I mainly think of this as a sculpture and what kind of cuts I need to make to get the plane.