These autonomous freighters are designed to work in hazardous environments.

ORIGIN
I made made the Keryx Robotic Freighter for a monthly modeling challenge a long time ago for a forum far far away. The theme was Research. I chose to research the work of another CG artist, @VITRIOL3D, and attempt to create a new scene in his style. Even with his advice my imitation didn’t resemble his images much but I like the resulting air/spacecraft.

I modeled the vehicle in Daz Hexagon. I think the original scene, a KRF in space near a planet, was rendered in Daz Studio with Iray. I recently Blenderized the model.

KERYX NAME
I made up the name Keryx. It has sci-fi flavor. Searching the web I found that a biopharmaceutical company is called that and it means ‘messenger’ in ancient Greek.

MATERIALS
The edge wear grunge is done like this https://www.youtube.com/watch?v=yIxq_QAO7Og

The ground mixes two textures by slope. Flatter ground gets one while steeper gets another. That is done with method number 11 here https://www.creativeshrimp.com/texturing-mix-tutorial.html
Change the color ramp to change the mixing of the textures. There are several interesting and simple node setups there.

The Logo decal is done with a second UV map

The the freighter has several vertex groups and corresponding materials. The wear grunge is applied to the base material but does not affect the other vertex groups. For example the nose has no wear. How to apply it over everything without repeating the wear node group in each material?

TIMES
Blender 3.0. Rendered in 1 minute with cycles at 4096 samples, adaptive sampling, no denoise, 1090x2560. Including research time to learn about the wear and slope based materials and not including the original creation of the KRF model it took about 10 hours to make this scene.

FILE
Here is a blend implementing the edge wear and slope based materials. Suzanne instead of a KRF and only colors for the ground slope material. The set up to use textures for the ground is there. Just plug them into the mix node.
Keryx-DEMO.zip (4.5 MB)

nice project I like it, I was thinking if there is more water between its gonna be awesome

Thanks for the likes Vitriol and Medo. No water. This isn’t a terraformed mars.

Updated above with the source of the terrain texture slope mixing method. 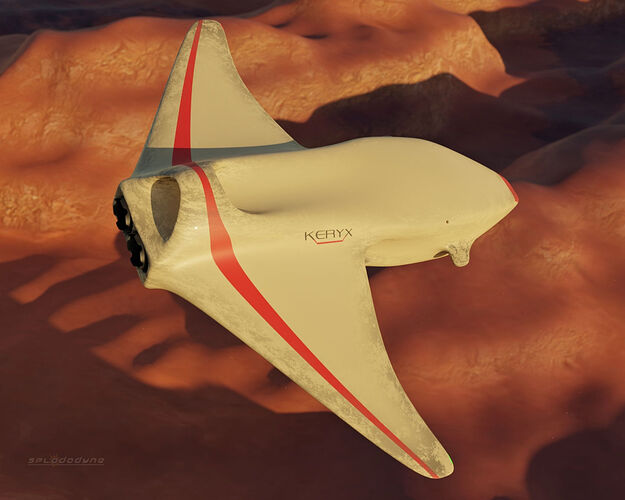