King's Landing from Game of Thrones 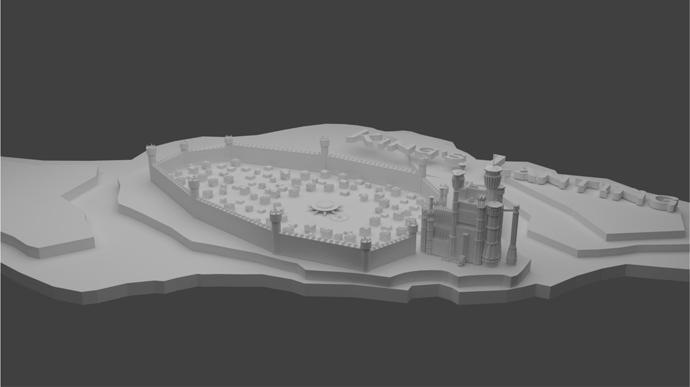 So, here’s is my finished model of King’s Landing, selling it on Turbosquid, unfortunately(need money…).
Please don’t start telling me why I didn’t texture it, the answer is that I suck at it(but anyone has any ideas or tutorials, I would be happy to know…).
If anyone wants to buy it, here’s the link: http://www.turbosquid.com/FullPreview/Index.cfm/ID/731533

hello antoni, i am also selling models on turbosquid, have sold some already, however it is not easy, and from what i learned i just wanted to give you some advice. try not to overprice your models, for example the gun you made for 25 dollars, you should expect that perhaps nobody will buy that since better guns you can get anywhere for free. so to sell models you really have to see if your model is unique and price competitative otherwise you will just be wasting your time trying to sell your models. and for your castle you perhaps you can make some renders of close ups of the castle itself so that interesting features gets noticed.
anyways good luck with your modelling

Thank you for the advise…
Well, it’s 25 dollars because there were some with 30-35, but with textures, so I thought 25 was a good price… Anyway, I don’t really care about the gun, I just sold because I didn’t know what else to do with it…
As of king’s landing, you can’t find it anywhere!!! And I’ve seen much simpler models with higher prices…
By the way, could you tell me what models sell a lot?
Thanks a lot…

Wow 100$ for something you can make in a few hours? Sure someone could buy this for about 5$ as a starting point for modelling a village? but seriously not 100$ Eitherway nice model.

And what about this: http://www.turbosquid.com/3d-models/architectural-warehouse-3ds/702089
It’s simpler and has twice the price…
And the Red Keep is a bit complicated (currently rendering closer pics…).

well there is only one rating of this model so chances are that that rating is the owners rating which means nobody bought it. I would look into lowering the price to 50 max.

Lowered it to 85, but still look at this: http://www.turbosquid.com/3d-models/castle-water-3d-model/712286
Even simpler, only textured… And bought at least 4 times…

By the way, I have a mind of starting modelling the barad-dur (If you don’t know it, watch all the LOTR movies at ONCE!!!)…
Do you find it a good idea?
It’s super comlex and much more chalenging (and might get a very high price, if I sit down and learn texturing…).
Does anyone know any good tutorials on texturing?

well there is only one rating of this model so chances are that that rating is the owners rating which means nobody bought it. I would look into lowering the price to 50 max.

Hey, wait a minute, you can’t rate it except if you buy it!!! Try for yourselfe…

actually i read that also established artist can give ratings without buying anything. actually i have sold some models, like even one model like 4 times, but i haven´t gotten a rating for any of my models, so it might seem they don´t really sell, but actually the best way i discovered to find out if a model sells is to put the search engine on best match, then the ones that sell come out on top.
Antoni, i do not think you should measure the price of your model with comparison with other high priced low detailed models, you have to measure you model with the best that is there, here is an example :http://www.turbosquid.com/3d-models/chateau-castle-max/689617
this product is half your price and looks a lot better. it has been online for almost a year and probably did not sold even once, perhaps one time since the seller of this model still is in his clear level that means that he sold less then 150 dollars. logical reasoning will suggest you that your model will most likely sell less than the model that i referred to.
and about your Barad-dur project it might be smart to see if someone else beated you to it already for example here:http://sketchup.google.com/3dwarehouse/details?mid=e2f28a87e13c984cb12fe14b4c938786
so you see it might not be so easy unless you model it with ten million polys or something which can take months.

i have the same situation, four months ago i began modelling the south of manhattan, one month later someone else published the south of manhattan on turbosquid. pretty frustrating. so the result is that i have to go then below his price and make my model better quality otherwise my model won´t stand out above the rest. one other example is i modelled a australian natural landmark. and before that there was the same landmark on turbosquid, but it was but ugly and the texture was horrid, so i made mine better and cheaper, so it started selling. mostly australians bought it since you can see where your buyers come from which is pretty cool.
what i am trying to say here is that when you are serious about selling models, then you have to make sure you compete for the best quality and price, otherwise the whole thing will just be a really big dissapointment in the end. so before you decide to make a model for selling purpose make sure something like that isn´t already there, and if it is then make sure that you can make it better and cheaper otherwise it is no use making that model in the first place.

my point is, if i knew these things way before i could have saved myself a lot of time.
so i hope this advice will help you so that you don´t waste your time also.

one last piece of advice. i am of believe now that if you model things that are unique and very beautiful, a masterpiece of your imagination, that will get you a lot further and will give you satisfaction and joy because you are creating something beautiful and unique that did not exist before. for example i really wanted to create a dome that looked like a flower, not just for selling, but i thought it will look beautiful and unique and i never saw such a model before so i made it, you can see here:http://www.turbosquid.com/3d-models/3d-petaled-flower-dome-glass/708226
i really enjoyed making it even though it was challenging sometimes but i think that is what modelling is all about challenging your imagination and your skill to create great models.

Thanks for the advise (again…), but, about the Barad-Dur thing, let me explain to you why I think that it’s a great idea:

Secondly, there is another thing that worries me: they say that if the price is low, the buyers will be suspicious about it…
Is that a myth? And if it is, how much do you think I should I sell it for?
Thanks again for the advise…

So then, when you make a sale do you pay royalties to the copyright holders?

to answer your question first Quandtum, actually you pay royalties to turbosquid, you pay quit a lot, which is just the way it is. At cgtrader.com you do not pay royalties but the traffic is much lower than turbosquid, perhaps cgtrader will become more popular in the future it has been increasing the sales lately though so that is a good sign.

antoni to answer you question, yes i understand what you mean with get back to a project when you are more experienced. i give you an example of my own experience with that statement, once i was working on a spacestation for months, and now looking back i realised i could have done it in a week if i had known blender better, so definately getting to know the modelling tools well in blender can save you heaps of time. so sure if you really want to model it and want to do it well then its a good idea of course.
i can understand that with the low price thingy, that is why you have to make very clear renders and also wire renders so that the buyers can clearly see the geometry, but to get started it takes some times. i personnally think that when your squid level goes higher, buyers trust you more since they can see that others are also buying from you. also it helps having a clear desciption of your product, and it might not be a good idea to say “please buy my model” that might not work well. you have to be professional otherwise they will think you are a newbie to modelling and that your models are not good. it might help looking at the established sellers to see how they describe their products. about low prices can be a bit of a two edged sword it true i think. perhaps when you finished your model you can estimate its price by looking at similar models and compare complexity and uniqueness and that kind of stuff.

well i am of to bed, ciao ciao

to answer your question first Quandtum, actually you pay royalties to turbosquid

Turbosquid doesn’t own the rights to Game of Thrones. That would most likely be George R.R. Martin or HBO (Home Box Office).

Well, it’s not 100% the same, it’s a bit different (and untextured…), so, I don’t think that I’ll have a problem… And I doubt that anyone who has created a model from a movie has paid a thing(there are some other Game Of Thrones things on TS…). After all, does it say anywhere that I can’t recreate a simple 3d model? I’m not recreating the whole series…

where or how do you get plans or elevations from which to make these models? How does anyone know if they are accurate or correctly detailed?