hey peoples
im trying to animate a bunch of objects going from one layer to another, now when i select all of them and then animate them to the next layer the last selected object is the only object that goes to the next layer, the rest stay as they were.

When you add keyframes on your layers it only applies to the active object, which is the last object you selected. I don’t know any method to move them all at once, so I’d do the tedious job of animating them one by one…

When you have animated 1 object going from 1 to another layer, select all objects (the animated object as last) and Ctrl+L-> Animation Data. This should do the trick. However, this will copy ALL animation data to the other objects

For each object add their layer setting to a Keying Set. Then you can keyframe the current layer for all these objects by selecting this keying set and pressing ‘I’ just like adding a normal keyframe. 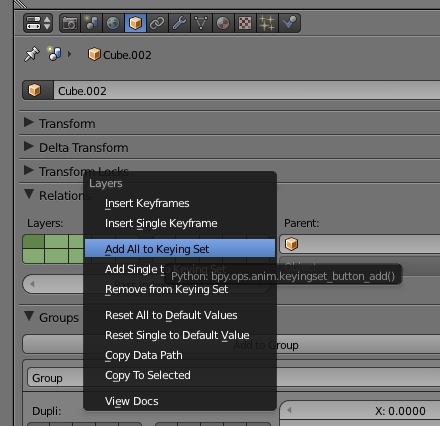 awesome thanks sago this really helped, i guess that if there is any data from other objects that i dont after transfering all data to all the other objects i can just delete the data that i dont want, and yes richard i could use that method but the there is problem with that, cause in my scene there are lots of individual objects that i want to go to the next layer and animating them one by one would take forever.