I’m new to blender. I’m using 3.1. This is one of my first models. I modeled each individual piece and started building my own LEGO parts library from scratch using the Asset Library. The car was assembled using linked assets from that library. The renders are done in Cycles.

I didn’t bother with the decals. I did do some procedural texturing for the tires and other rubbery parts though.

I’m a huge LEGO fan. This set has 3696 parts according to Rebrickable. It was good practice modeling it. 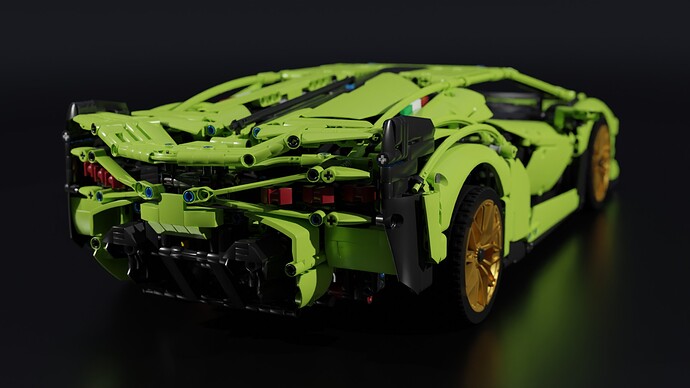 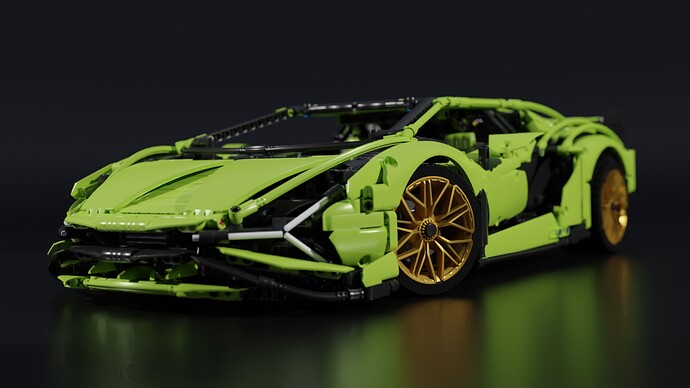 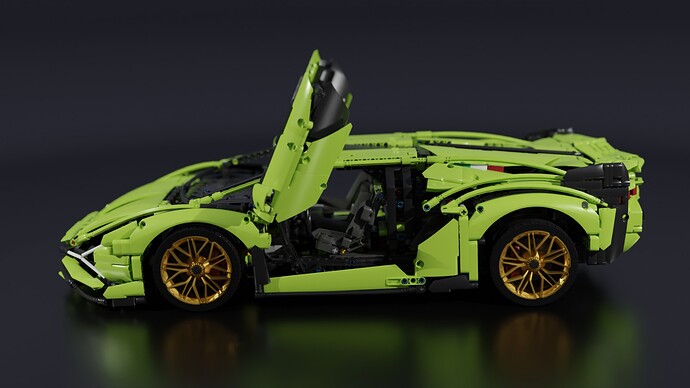 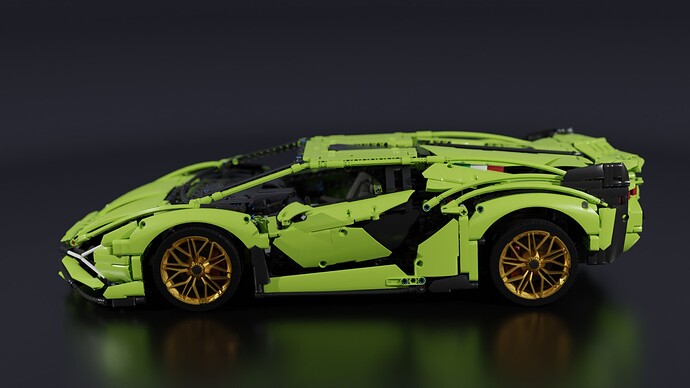 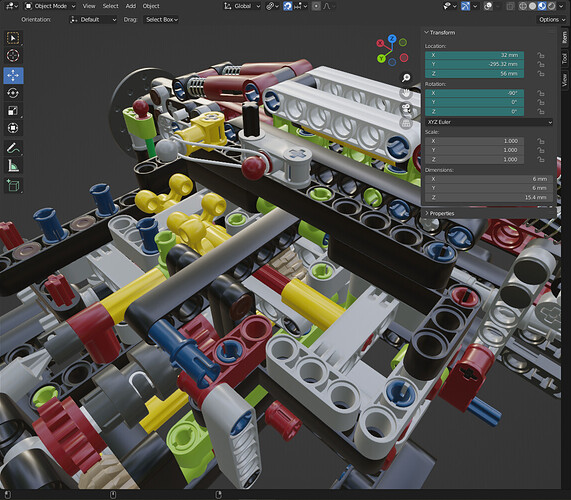 Although I’m not into lego per se but do appreciate the effort and skill finalising this piece, good job.

Plus just noticed I think, the addition of DOF which is also a nice touch too

Wait, so if I understand correctly, you modelled every individual piece, and then placed them all by hand??? If so, then that must have taken some serious patience!

Thank you. Yes. Depth of field. It took me a sec to find the settings for it. I think it definitely helps things look more realistic. I first used DOF in the last 3D app I used. Blender’s is probably even easier to use—now that I know how.

Pretty much, yes. I modeled each different type of piece separately. Then I marked each one as an asset. Most of the parts were used more than once. I reused the same linked asset over again in these cases. I also used a bit of a shortcut. When I figured out which subassemblies were just mirror images of each other, I just placed them once and then mirrored them. The LEGO instructions don’t always make that obvious; so, it takes some study to figure out what is what. Even with some of these shortcuts, it was still starting to slow down my somewhat old computer by the end.

The hardest part was figuring out the geometry of the pieces I haven’t seen before. I based my estimations on parts I have seen before, with a little help from 2D images from sites like Rebrickable and Bricklink. Modeling LEGO pieces is a bit of an obsession of mine. Even before computers, I used to draw them on paper by hand.

I added more pictures now that I’m allowed to.

This is incredible. The modeling is great, and the rendering is pretty good too! Good job!

This must have taken some serious asset management. How many unique pieces are there?

Also, are the technic pieces rigged? That would be awesome!

How long did it take to model ?

Im very amazed by that you actually build your own parts. I thought you used that app to build lego models. There is a app for this.

Wouldnt it be an idea to make this in a reference file. In that file you layout all pieces like the lego manual has with numbers and letters. Then you link in all those models. Im just brainstorming here, not sure my idea would actually work.

I kinda vaguely remember that when looking at a lego manual, i used to show an overview with part numbers. But im talking about manuals from 30-35 years ago

Trying this replying to multiple people thing here. I’m new; so, my apologies if I mess this up.

@Zorro_Weaver Thanks! Rebrickable says 295 unique parts, but I think that includes parts that vary only by color. I did have to create different assets for the different colors, because for some reason it was not working when I tried to link multiple instances of the same linked object to different linked materials. However that was trivial—just shift-D and marked it as an asset with a different linked material. I started trying to rig the Technic parts, but I quickly gave up because this model is extremely complex. Even the doors opening have a lot of independently moving parts. I’ve never rigged in Blender yet; so, I thought it would pretty much take me forever, both the figure out the actual mechanics of the LEGO set not to mention learning rigging for Blender. I have rigged humanoid models and simpler mechanical models in Lightwave before. It would be awesome to see this fully rigged, but I think I’ll start with something simpler.

@Ammar_Karim This was the first complex model I tried in Blender. Modeling every part took forever, maybe about three days. The assembly took much less time. Placing each piece and modeling the tube shaped bendy pieces in place maybe took about 8 hours or so. There were 3696 pieces. I probably could have skipped some of the completely hidden ones, but as my first Blender project, practice was the whole point. The actual renders took way less time. About a half hour, but I bet I can cut that way down now that I understand all the render settings a little bit better. I think I probably did way more samples than I truly needed.

@rombout Two main reasons for modelling my own parts—I’m sort of obsessed with LEGO, specifically LEGO part geometries, but also I was just learning Blender for the first time and thought it was a really good way to get familiar with the modeling tools and workflow. This is especially true for all the technic pieces which have unusual symmetries, swept curves, gear involutes, and other fun geometry. It was a fun challenge and good practice. I did look at a plugin someone made for importing a few of the LEGO pieces I’ve never seen before from LDRAW, but I couldn’t figure out how to get that plugin to work. I think maybe the plugin itself was a bit of a work-in-progress. I think I found it on GitHub. Making a visual parts catalog or instructions like you’re suggesting sounds really cool. I’m just not sure I know how to do that yet. For now, I just used the PDF of the official instruction manual. It’s so cool that all that stuff is freely available online now.

had a quick look at current model manuals. For example this page, see how it shows model parts and model numbers and the amounts. That is very useful data! 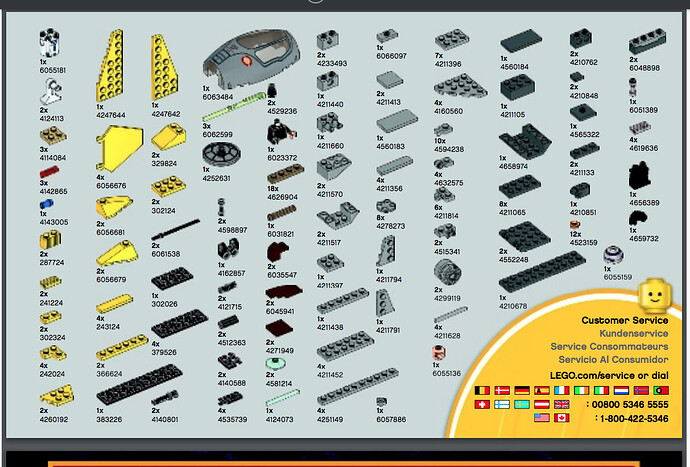 Also checked the lambo manual, they also show this part overview. Wouldnt that be easier doing it like this? Well you make a file which is the library. Then you layout all these parts, with partnumber so you can easily compare them to the orginal build manual. Then when you link in those parts, you select all the parts. It would be a much easier over view for you to manage. You could also do this using scene by the way. So you build everything in a different scene and layout them out in that scene. Then you duplicate them to your main scene where your building your car model.

I was just tinkering a bit after i read that you had a hard time keeping track of parts you already made and parts you did not. With so many parts, its almost impossible, at least very laborious work, to check each part each time you want to add it.

But very great idea to do such a thing to learn modeling tools and learn how to manage it. If you want to learn more about linking stuff have a look at this video, its a great example about linking objects between scenes. He also has an example of using libraries and linking collections

You did have prior modeling knowledge or just didn’t had blender knowledge? That would be very impressive if this is your first big scene

Yes. I’ve been using other modeling apps for years. This is just my first big scene with Blender. I did a lot of stuff with an old copy of Lightwave. I’ve also done some free trials of Rhino over the years, and actual UNIX based CAD programs about a million years ago. I’ve been meaning to check out Blender for years, but am only just now getting to it. I regret waiting so long. I love it.

Like I mentioned earlier, do check out the video i liked of Daniel bystadt, his work is mindblowonf. Plus he shows a lot of behind the scenes. Especially the linking stuff between scenes or linking from collections is super handy.

Here’s a blender conference video, that one was super nice because it explains the new collection system really well