A departure from my usual style (not that anyone here would know what that is, so take my word for it), a stylised scene I currently use as a wallpaper on both my PC and my phone (the latter in 9:16, with a custom-made lock screen). 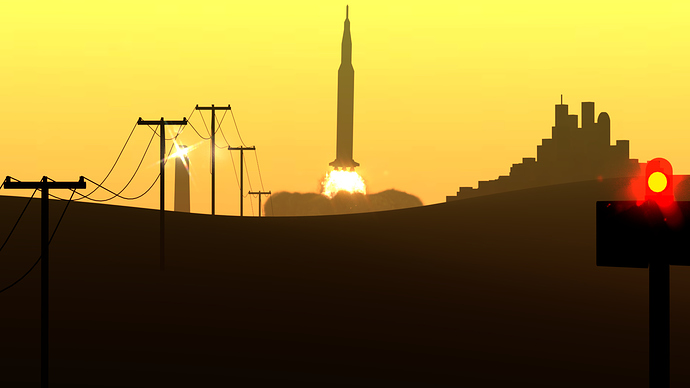 The meshes are disappointingly simple, most of the work went into the composition (which, I’ve been told, is kinda messy) and most of the computing cycles into the flame and smoke of the rocket exhaust. The rocket, naturally, is a Saturn V very much like the one that took a bunch of people to that grey rock that’s orbiting the Earth. In silhouette anyway, as I said the mesh is largely void of detail.
Realised only too late I could’ve done the background in the compositor as well, since I set it up to not light the meshes (bar the smoke) at all anyway, but… well, I didn’t.

Wish I could’ve done the smoke sim at a higher resolution, but if I try that it crashes Blender, so that’s the best I got. Oh well.