Hello!
I’m trying to light my scene properly but even though I’ve got three light sources it’s just looking way too dark. I’ve tried increasing the strength but that makes it look worse. There’s probably something I’m missing, it would be appreciated if anyone could figure out what I’m doing wrong.

Here’s a picture of the render preview of my scene: 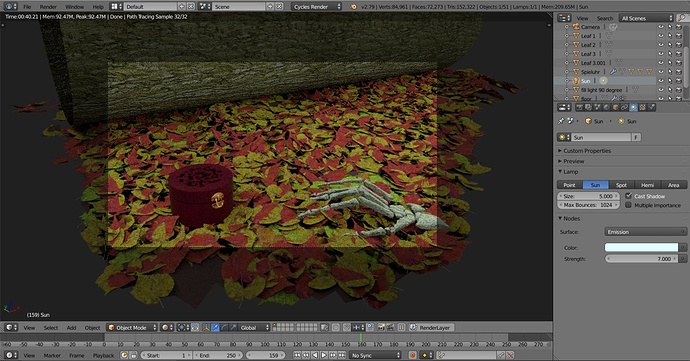 And here’s the settings of my light sources; a sun lamp and two emission planes: 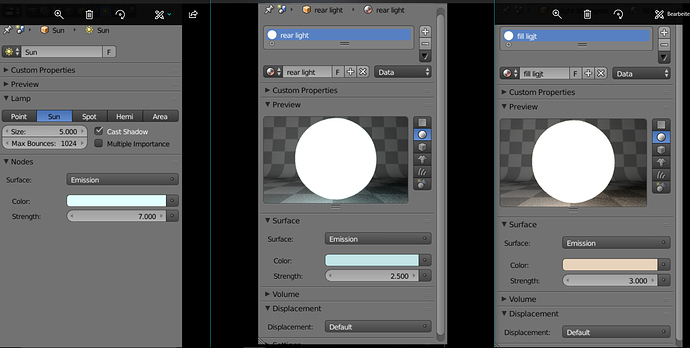 And also the position of the light sources in the scene (if that helps?): 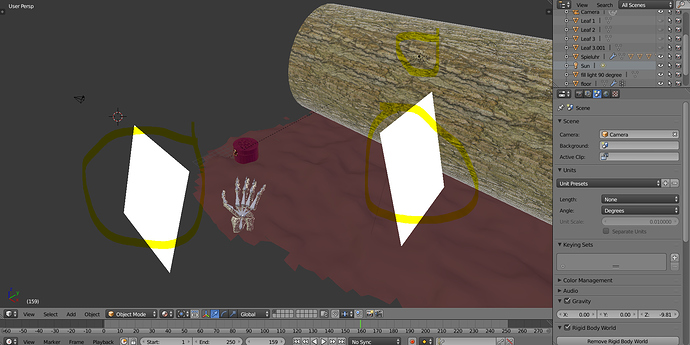 I’m very grateful for any help!

use area lamps without Multiple Importance. cycles will process them faster. branched path will help even more.

Have you tried increasing the emission strength?

Thanks for the replies!
Yes I’ve tried increasing the emission strength. It looked brighter but in a bad way. It was too bright and there were basically no shadows.
Using the compositor to control the brightness didn’t work

Lastly, I’ve tried using the area lamps without multiple importance as suggested but they are even darker than my previous lights, even though I’ve cranked the strength up to 1000.
I’m attaching the blend file so you can look at it:

Make sure your direct and indirect clamping are both 0. Also check your exposure.

The direct and indirect clamping are both on 0 so that’s not it…
The exposure is on 1, is that the normal value?

Everything in your scene is gargantuan in size. The log, e. g., is more than 70 meters long…

While Blender is pretty much size agnostic when it comes to modeling, light distribution in Cycles very much depends on the scene scale: A 60 W light bulb may sufficiently illuminate a small room, but not so much an airplane hangar.

Not sure where you expect shadows to come from, with two very large area lights (= very soft shadows) directly opposing each other?

I didn’t have the giant area lights at first, I only added those because I couldn’t get enough light in my scene.
But I will try scaling everything down, that might be it thank you!

What your eye is seeing is a lack of contrast, a lack of illumination color, and an uninteresting tonal-range. You’d detect the same problems in a photograph, for the same reasons, if you merely set-up the studio lighting to use “two big soft-boxes.”

If I were lighting this scene for a conventional photograph on a set, I would have one very low-power soft-box overhead or to one side in order to illuminate the leaves, and I would probably add a light orange gel to it – or the color that’s opposite orange on the color wheel.

Both of the “objects of interest” would be illuminated by very, very precisely-placed spot lights of a different color.

And I might well employ an old photographer’s trick which is effectively equal to compositing: first, photograph the overall scene, minus the two props, then turn out all lights in the studio except first one spotlight then the other, in order to superimpose three independently-lit exposures onto a single piece of film. A dark-card or gray-card would be carefully positioned under the objects during the second and third exposures to block all light from the leaves or anything else.

A tedious process, but it worked. PhotoShop® makes the modern-day photographer’s job so much easier!

(Trust me: this sort of thing happened all the time. So much for “photo-realistic.”) :yes:

Given the visual complexity of this scene and the importance of directing the user’s attention precisely where we want it to go, I would probably employ compositing here. (1) The clean-plate of leaves and surroundings. (2) The cylinder, on a shadow-catching surface. (3) The skeletal hand, ditto. In the latter two, ignoring any color from the shadow-casting surface and considering only the shadow. I could now, “in post,” finish the image as I liked.

Specifically with regards to the shadow channel, you can use it to do more than just “darken” things. You can also very-slightly tint the shadowed space with a complementary color to the chosen color of your illumination (with very low saturation).

When you do use compositing, you’re able to focus on the exposure of each component of this otherwise-difficult-to-light scene one at a time. And you can see the results in real time. Blender has a very powerful node-based compositor now. Also note that you are now free to use any render-engine(s) to produce the raw materials: BI still has many tricks up its sleeves.

When I use Cycles, I think, “soft box.” When I use BI, I think, “spot light,” and “directional light.” Since both render-engines use exactly the same geometry, I can very-easily use both, and very often do. “MultiLayer OpenEXR” files are your bestest friend.

You should also use Blender’s evaluation tools such as Histogram throughout the process, in order to quantify what your eyes are seeing. As you continue to stare at the image, your eyes will get tired, but the histogram tool will not.

P.S.: Looking at the scene once again, I think that I would also separate-out the log for special treatment. You can include it in the Cycles “soft-box shot,” or not, but a “soft-box” doesn’t give it the punch that such a richly-textured object deserves. And I think that if I were to light it just right, I could give it a hint of being like a gravestone – subliminal, but sinister. “Comping” gives you the complete flexibility to do that.

“A photograph is captured in the camera, but made in the darkroom.”

Everything in your scene is gargantuan in size. The log, e. g., is more than 70 meters long…

How do you see that?

Anyhow, regardless of scene size, the sun is a constant emitter and not affected by inverse square law light attenuation. But your sun is massive in size (5?, try 0.005 for something more sensible - disk size, neglecting the corona and atmospheric glow which would make it appear bigger) and bright, so it will easily overpower any shadows cast from the other lights.

But probably easier to nail down if we had a file to look at. Just delete the heavy stuff such as textures and complex geometry, would be more than enough to figure out what is wrong.

I will definitely try out your advice, it seems like a good way to approach lighting a scene. I’ll keep you updated on how it works out. Also thank you for taking the time to write this long long post, I really appreciate it.
CarlG, I actually did upload a blend file in a later post in this thread you just have to scroll down a bit

And I will try out a smaller size for the sun lamp. Thanks!

How do you see that? … But probably easier to nail down if we had a file to look at.

Galaxycluster, the simple and rookie problem with your file, as IkariShinji told you earlier, is the fact that your scene is enormous and the lamps falloff cannot get the light to your objects. It’s that simple. Do not try and composite, or Ansel Adams, your way out of a beginner mistake.

Oops. I even looked several times

I did scale everything down and now the lighting is working properly again so thank you all for the tips! I will remember to keep everything at a more reasonable size in the future.

Good to hear that you fixed the underlying issue and got it working, and also good that you posted back with your updates. Best of luck, the models look really good.