I know it looks crazy to want to learn blender to use only those buttons that helps me make 3d clothes on a 3d character but even the idea makes me so happy !!
is there any tutorials on those ? maybe I am not using the correct keys at Google can anyone help me?

Rigging- Fitted Mesh and how to make the cloth move as the body moves. :The only amazing ones are if you use avastar but I cannot afford it not yet :eek::rolleyes::spin:

maybe this helps a bit 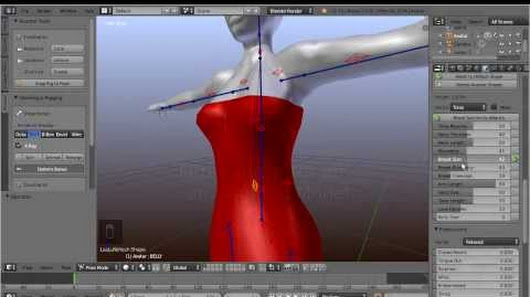 I think you should play with shrink wrap modifier and subdiv modifier to get what you need.

@kalliopi, what you ask is specific to Second Life. You are likely to get more support in this forum:

I have found time to make for you also a blend file obtained from an xml file using the slav plugin for blender. Open this file and check out how oddly the weight are distribuited on the avatar.As I was telling you before each vertex is in more than one group and in each group the value is 1 as if they are not normalized at all. This makes you guess that second life uses a complicated, mad, insane system of morphs or something like morphs to change those shapes and that the secondlife avatar is not rigged on collision bones as you might think. Before fitted mesh I guess that those bones were used just for scripting purpose and probably as a sort of driver for the morph system that secondlife uses, probably something similar to the slider example that I showed you, but much more intricated and complex.

Here is the link to get the secondlife avatar converted into blend.

I am a scientist borrowed to the 3d world and when I do things,my world is made of physics laws math and rationality, I try to apply Galilean method, but in all this there is few of scientific. Science wants that you observe a phenomemous, then riproduce it in a lab studing it to finally write a law that describes it and makes it easy to reproduce.Fitted mesh goes beyond the scientific method.It’s hard to observe collision bones in world(even with those bones tuerned on), studing how the collision bones move in second life, it is hard to reproduce,ergo a law or a tutorial for it becomes hard to be made especially if you pretend to do it using that crap that secondlife dispenses on its wiki page. This happens because as I said above the whole fitted mesh thing has been built around avastar.

one more memento that I forgot in the last post. In the page that I linked for you to see which bones are involved with the sliders for fitted mesh there is a mistake that lindenlab has made and nobody has fixed yet,cause nobody cares to make it free. The error is that in the sliders for body fat the lindenlab forgot to add the legs collision bones, which are scaled in world in secondlife when you observe them, moving the slider for bodyfat.So when you build your own poses for body fat states of the slider don’t forget to scale also R_UPPER_LEG, R_LOWER_LEG, L_UPPER_LEG,L_LOWER_LEG.

@AnonB you pose some great questions and provide some great answers, but it’s all very confusing. I find this is the case with a lot of people are extremely tech heavy. Lack the ability to simplify. I understand what you’re saying but what I’m guessing the person wanted to know is just simply, how do I do this. Easy steps. 1. 2. 3. Even if the steps ARE NOT easy they still need to be listed in an easy way. I can tell you I have my troubles with Avastar and while I’m happy Gaia has done what she’s done, I’m NOT happy about the level of support or lack of choice if I choose not to use Avastar. Much like the person who posted originally, I don’t care who has a mafia on what. I need to make money and need to know how to get my items done.
If anyone here can simply what was said and provide some CLEAR alteratives to using Avastar, even if it means weighting by hand, I’m all game to hear it.