I have included a file, does anyone want to try and create this character’s body from Lost in space for use in the game engine, doesn’t need detail, as a texture could provide that. Most likely from the figure I have, the lighting isn’t very good, but for the purpose of just getting the figure created I think these should be okay for now.

I don’t know how to create this, I’ve done it once, but not very good.

I’m going to try again with this, but I thought I’d post this, somebody may want to give it a go, remember to only model one side of the figure, as for uniting it, and creating a skeleton well that is another task.

There is three images in total, two front, and one of the right side, It will require some improvisation.

I made a start, but I tried a cube for the figure, and then I couldn’t really do much with it. I then tried a plane to start on one of the legs, that is certainly a primary objective.

I even tried a cylinder for the leg, I think that is the ticket for that.

Hi, I have tried to see what I can do with this. So this would work in blender game engine. I have used 2.76. The aim would be to animate the body, i would include a neck and face, from my older model. That I can’t do any better, I am sure the body can be better with an animation that works as closely as to the cgi character from the film.

Here is my work in progress so far.lischaracter5.blend (2.9 MB)

So this has a alpha body, spheres and a cube is what blender game engine supports, so the body must include the legs attached/joined or built within, for a smooth armature to animate the legs. 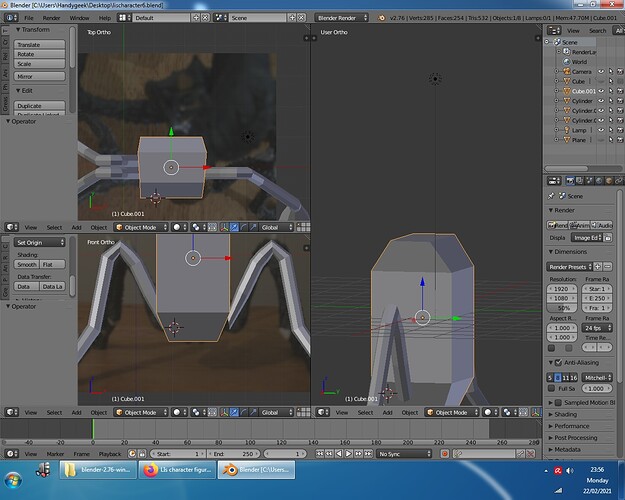 It isn’t that doable. The good news I have the old file. But that wasn’t very flexible, too boxy, and static.

circle, box, and cylinder as well plane work in the blender game engine.

I don’t remember how to do much in this. I do have a player and a weapon to add to it, so I could try and recreate this mini game.

I haven’t a clue how I could model the spider body, I think my original file was the only way. But it lacked good animation, proper walking. 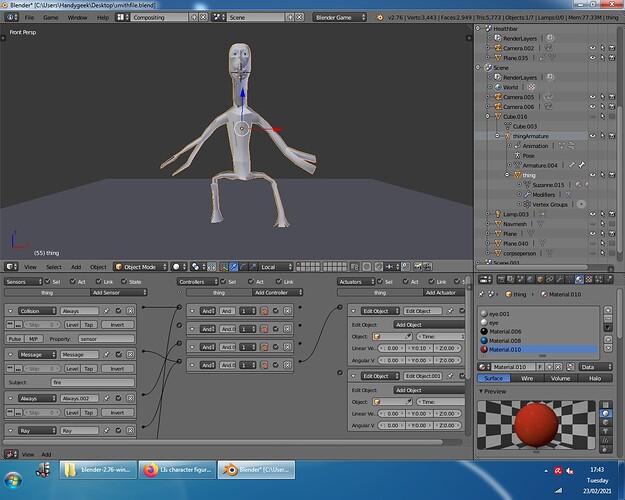 The animation works in the armature, but I don’t know how to switch it on, I would need to scale this, compared to the original, the player would still use a melee attack, while the character hits the player.

I’d create it from one map to another, with just a small area, since blender couldn’t support any special effects, and a new model would load with the character injured with small spiders on it. That would be the only way it would work out for a game complete.

I don’t think there isn’t much that can be done concerning the structure of the AI. If somebody can try and assist me with this task. Of,

Having a player be attacked by the character, I have the animations setup, but I will need to have a new model of the character where once the player stabs the AI, it will load one with small spiders on it. I had it textured the original file, but it was used from the film.

For this I will keep it simple, I recall some difficulties with it when i did try it, there were some problems.smithfiletest.blend (4.1 MB)

The cube here is just the FP, but yes, the AI just moves and is animated as seen, but just facing a different direction. I used 2.76 for this edit. I will add an FP with a camera into the file along with the weapon.

This was a try to duplicate the legs, and create another using the original. I don’t know, if anything I whole new body is obviously needed to make a more realistic looking character as seen in the film. It is there, but I think the legs are really the poorest part of it.

In this file, I have the basics setup so, there is health bar for the player there, there is a load of stuff, that any python programmer would understand. So the character kifes the AI, and a new one would need to load in its place, I will want to load the new AI with moving AI spiders. I scaled the AI a bit, so that the FP knifes in the stomach area. In the film, professor Robinson’s stabs the Spider smith’s egg sack, like a dump truck.

So the spiders eat their wounded.

Anybody want a crack at this. Here is the new file.https://ufile.io/nmw2gj5k