I don’t know why, but this makes me feel that the robot is somehow prison in that place. Those ropes makes the feeling even stronger. Very good modeling quality here.

Lots more render wrangling today. I painted a really basic background and a cloud texture in Photoshop to use as the base, but other than that I ended up comping this one entirely in Blender. It’s hard to beat the flexibility of nodes. 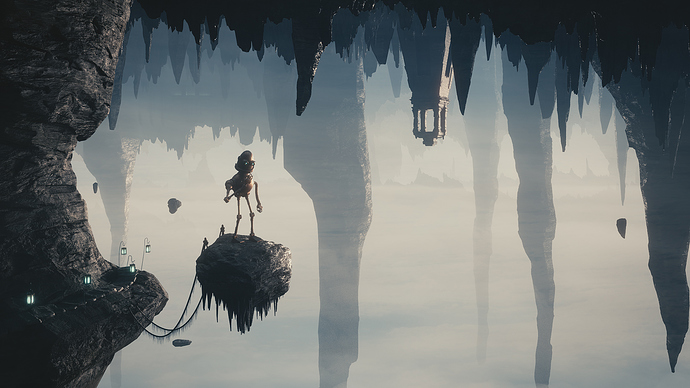 There are still a couple tweaks I can see that it needs (and probably quite a few I don’t see), but I think it’s rolling towards the finish line nicely. 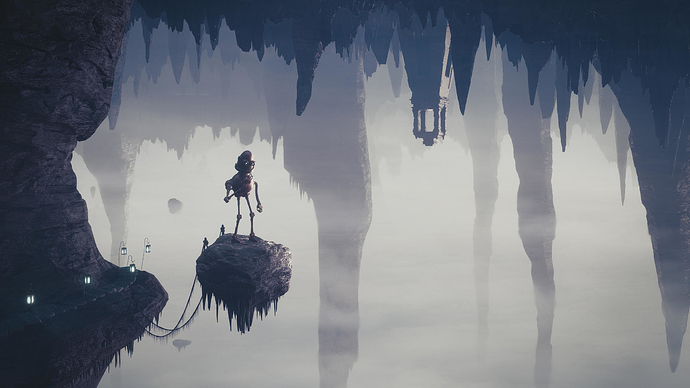 The light is softer and more neutral-colored, and the mist much thicker. I played around with the fog layers and color grading to get the histogram really close to the concept art…it can be really tempting to brighten the background too much. The one main concession I made was to use deep blue instead of blue-green like in the concept, I think it just feels better.

Thanks for that tip about blurring behind the smoke! I never would have thought to do that, and it makes a big difference.

Good luck in the competition

Thanks very much for all the feedback, it really helped keep me motivated to work on this project. I’ve submitted the render to the competition, and also posted it to the finished projects forum.

Once I take a breather, I want to hop back in and finally start painting some textures for that robot. As a couple people have mentioned, he is pretty small on screen which kind of defeats my original purpose for making him – detailed textures and shaders. So, I’ll make a really small, simple scene to focus on just the robot.