For a while I’ve wanted to model a simple steampunk-inspired robot (actually I wanted to texture and shade it, but in order to do that I had to model it first), but I’d never gotten around to it. One night last week I pulled up some reference and did a quick sketch, and a couple days later I had this: Here’s the original robot sketch and the blocked-out model/rig: 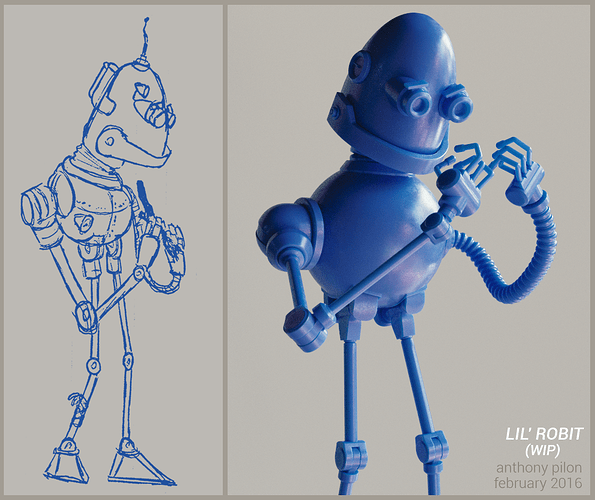 Once I’d added enough details to the model to make sure I was invested in finishing this render, I started brainstorming for the rest of the scene. At this point I probably have time to complete it for the current BlenderGuru competition (theme: ‘Dreamland’), so I’m going with a surreal bottomless cavern environment – another thing I’ve wanted to make for a while.

After browsing a lot of reference and inspiration over the weekend, this morning I finally got a concept painting I’m relatively happy with: 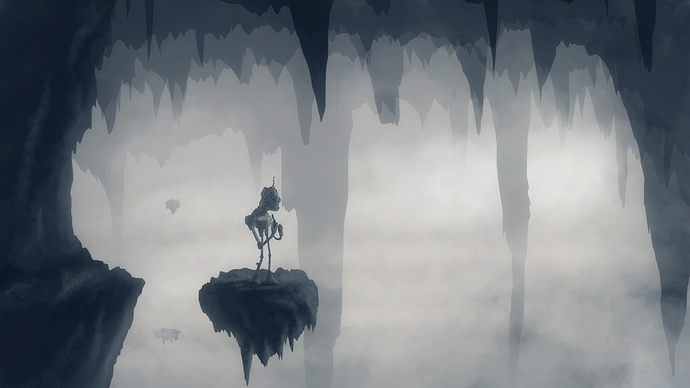 There are some elements missing still; I want to add broken stairs to the island and maybe some old ruins, but I find it easier to block those things out in 3d than to draw them.

Anyway, that’s where I’m at right now, feedback and honest criticism would be much appreciated. Thanks!

Sculpted a few stalactites for the mid-ground to get an idea of the style of rock formations I want. 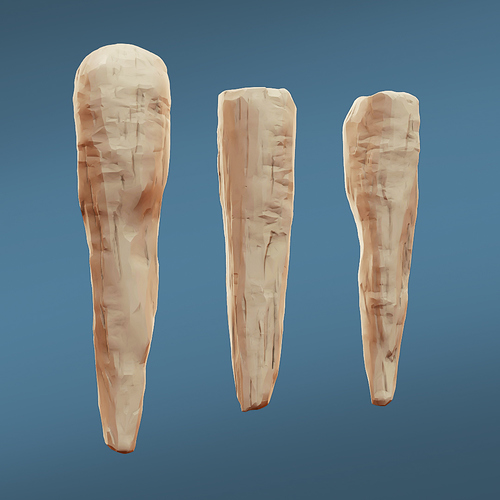 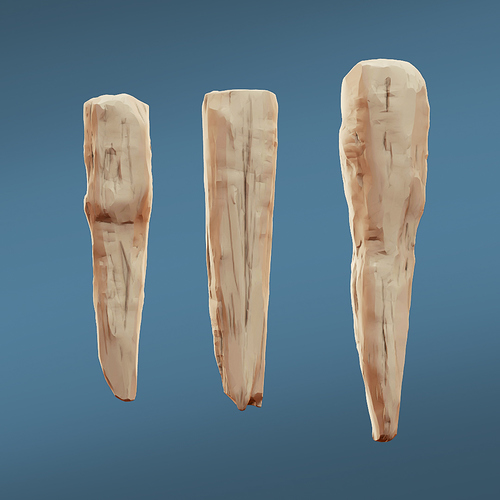 I decided on an igneous cavern, formed when a massive area of magma receded. The main structure would be made of older rocks like peridotite or granite, and the stalactites and other new structures would be made of basalt and obsidian. These were pretty quick to sculpt, I’ll probably make a couple more before starting on the larger pillars.

The concept is already beautiful. I am looking forward to see more 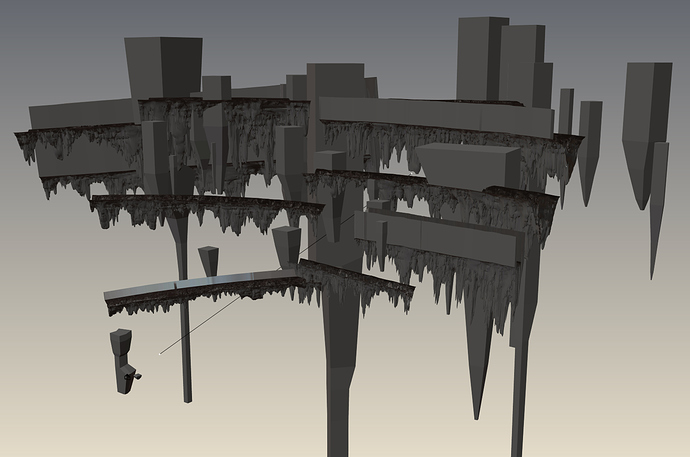 I blocked out the larger stalactites and columns with individual meshes for sculpting later, then filled the gaps with procedural cavern formations. 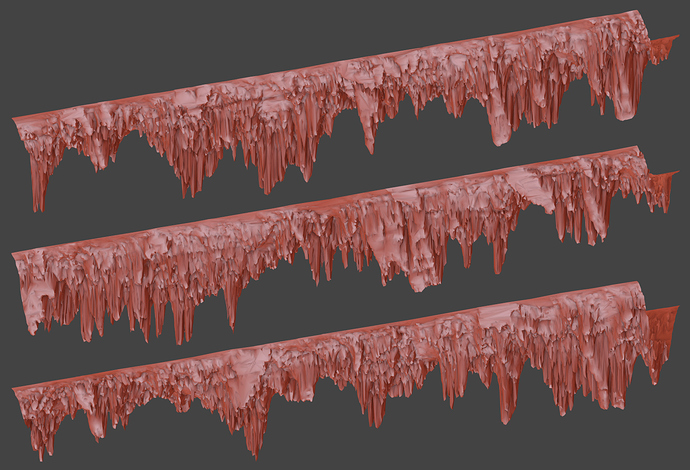 To make these, I layered two Voronoi F2 textures-- one for the overall rocky forms, then a contrasted one to get some of those larger spikes. Add a Voronoi crackle for some horizontal variation, then a planar decimate and edge split to bring back some sharp edges. I used object mapping on empties so that I could change the scale in different axes (V. crackle is scaled down on the Z) and so I could get several different variations just by duplicating and moving the mesh. (remember to apply the displacements before using the asset in the scene.)

Next up – ruins, probably. I need something to tie the natural cave environment and the artificial robot character together.

Just wanted to say I love how you created the joints. I recently did a robot to be animated and had a real hard time figuring out how the joints could work. I wanted them to seem mechanically bare, but still functional, enabling degrees of freedom. I’m curious, did you have a reference for his body to leg joints?

I didn’t have any direct reference for the hip joints, just the generic robot and mechanical part references I was using for the rest of the body. I was originally building the hips as simple pivots (see the original sketch); but when I started thinking about the rig there was no way for them to rotate sideways, so I added a second joint just below the pivot. Eventually that moved up into the pivot itself, to save space.

Looking at your concept painting, I have 2 small composition suggestions:

There is nothing I don’t like about that design. I also especially like how you formed the joints, and the asymmetrical arms are a great touch.

Started on some ruins (buildings in pristine condition for now, I’ll add damage in a sculpting pass). They’re based mostly on ancient Egyptian and Indian architecture. It’s hard to tell how much real modeled detail I’ll need on these and how much I can do with textures, since they’ll be flattened quite a bit by the mist pass. I also don’t want to draw too much focus away from the robot, though I do want an interesting background with some things to look at. 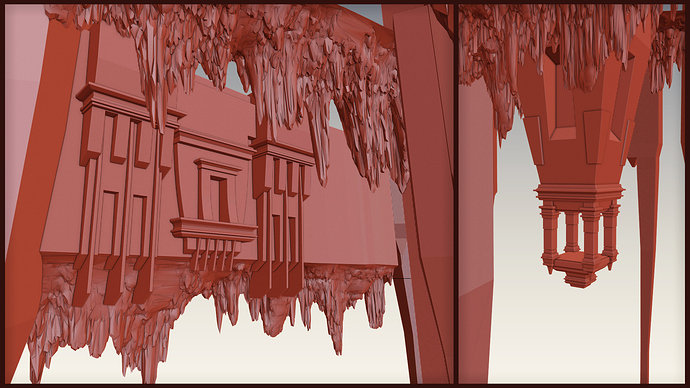 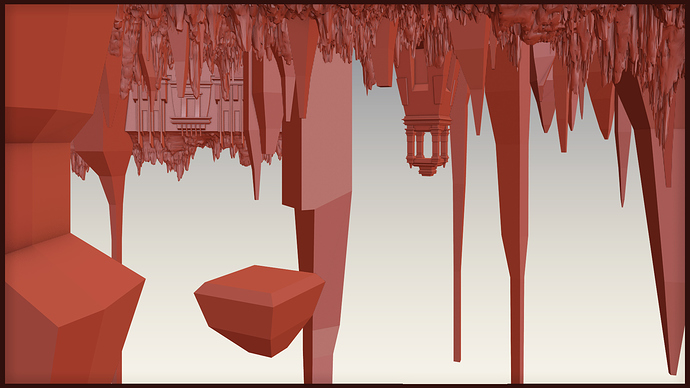 Jeepster - thanks for the feedback. I tried it out on the concept, and it improves the composition by a surprising amount. I’ll keep it in mind when sculpting the rocks. 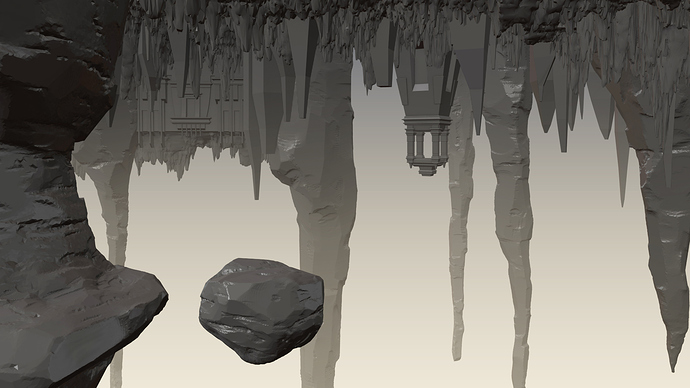 Some of them need a bit of sculpting still, but others are about ready for displacement maps I think. Now that I have some fairly detailed rocks in the scene, the procedural ones are looking a little low-poly by comparison… 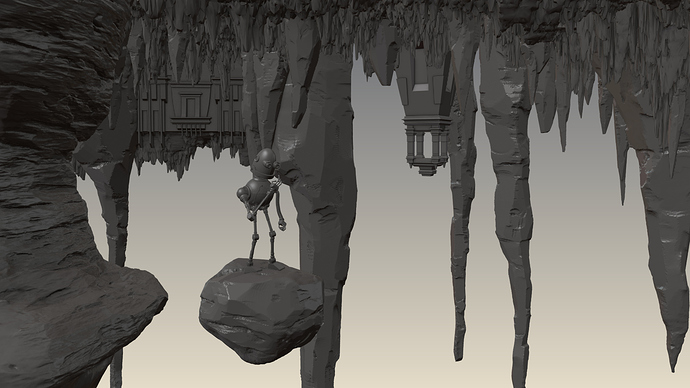 I would suggest moving some of the stalactites behind the robot out of the way. Maybe just move them up so they still point at the robot? It’s always good to have a strong well-defined silhouette for your character, and right now his head overlaps with some stuff behind it. The more contrast there is between the figure and the background, the more the eye will be drawn to it.

I know you’ll have some atmospheric perspective to help separate the foreground and background, but I bet if you didn’t have any geometry behind the robot, it’d be a lot easier to read

That’s a good call, and something I didn’t really think about until I started looking at the robot and scene together with the same matcap.

Mini-tut on my rock sculpting technique: 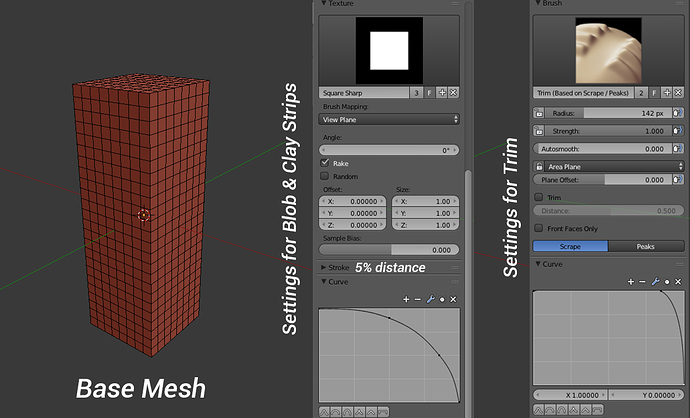 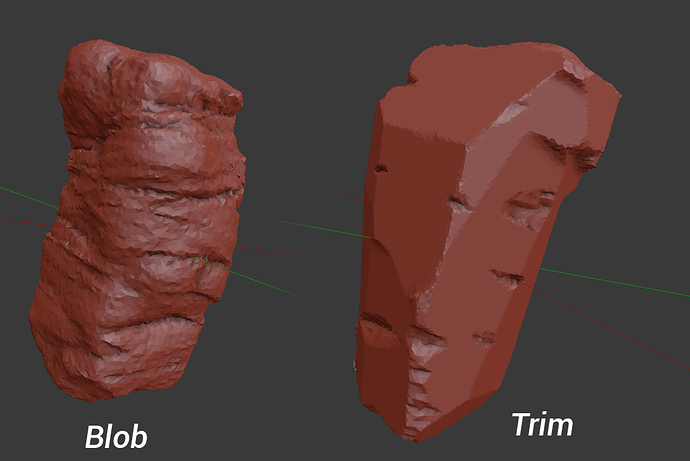 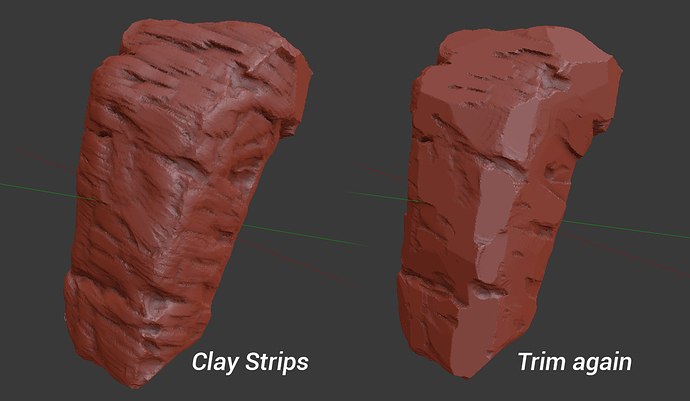 Repeat 2-3 as many times as you like to keep adding details. The crease brush with a high strength and tiny size can be good for adding small cracks, and the clay or sculptdraw brushes might work well as alternatives to blob + clay strips. For the final round, I like to add couple of displacement maps for subtle detail (controlled by weight painting so I can keep some of the nice flat planes.) More can also be added in the shader.

I just want to say “Wonderful work here”. Keep it up.

The concept in #1 is great. But I do think it is a real pity that your wonderful robot model has so little screen space in the composition.

I was pretty busy over the weekend, so I haven’t had much time to work on the scene the past couple days.

Today, though, I got a chance to start playing with lighting and some preliminary textures and compositing: 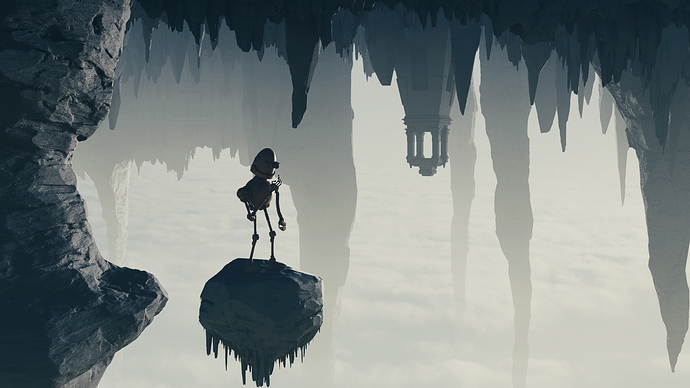 There’s a long way to go still, but this is the first render I’ve gotten that looks somewhat like the concept art, so that’s cool. I spent quite a while trying to get a good misty look with Cycles volumes, but the falloff options are pretty limited. For this composite I ended up using the mist pass and a phototexture; volumetric cloud layers are in the works: 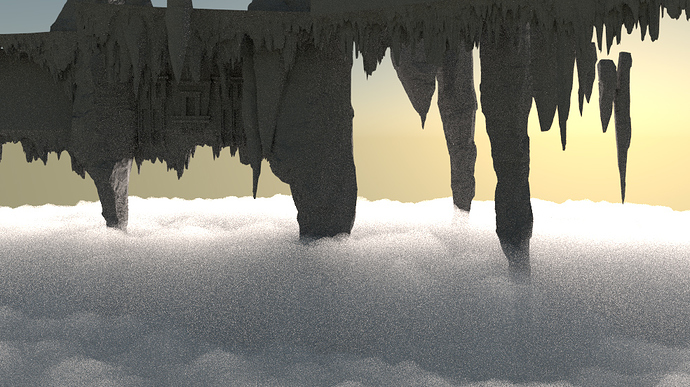 For the final render I’ll probably end up splitting the rocks out into several renderlayers to have more fine control over the look of the mist. The robot also will have a bit of custom lighting, he’s looking a little too dark right now.

Speaking of the robot, I think once this piece is done I will do a much smaller/simpler scene that features him up close. This scene did explode in scope quite a bit, and at this point it won’t be really worth it to spend a lot of time texturing and shading him (the whole reason I made him in the first place,) since having him small on screen is pretty important to the composition.

Those rocks on the left look outstanding

(thanks for that mini sculpting tutorial btw!)

Is there a way to pose the left arm so there’s more space under the armpit? The silhouette almost looks like it only has one arm.

Also, I don’t know if this would be too cliché or not, but have you considered having the robot’s eyes glow white? I bet that could look kind of eerie and cool

Lots more texturing, and some composition, lighting, and model tweaks: 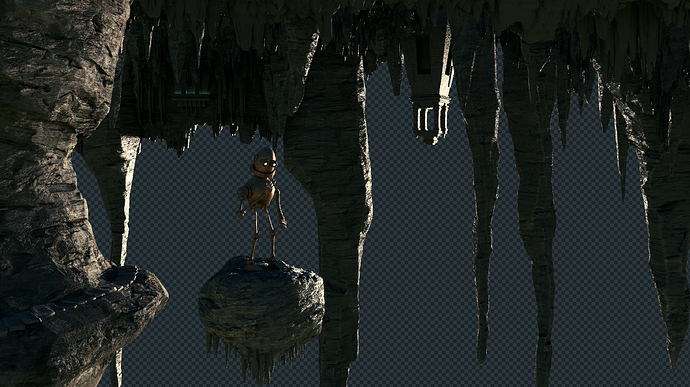 Cliché or not, I think I like the glowing eyes. The next big thing to tackle is damage sculpting on the ruins, and I want to add some old lantern holders along the stairs path. I’m going to try to finish up most of the elements in the scene tonight, so I can get it ready for render/composite tomorrow. Only a few days left before the deadline.

Quick update before I stop for the day - damage sculpting and eerie lanterns. 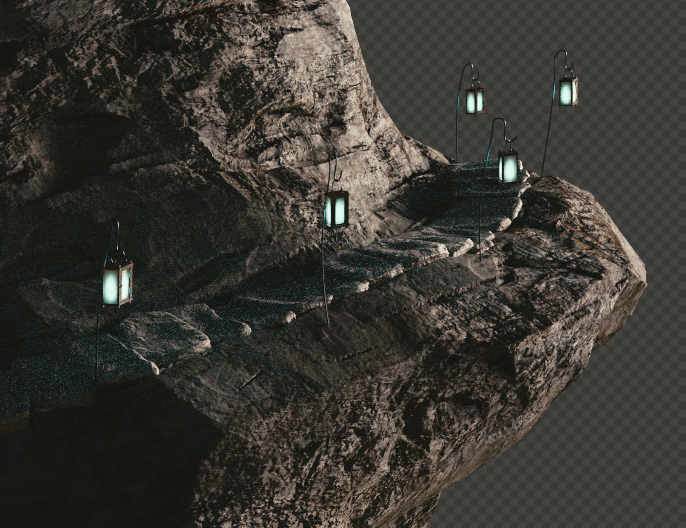 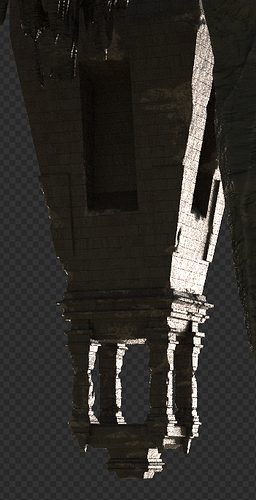 And here come the test renders: 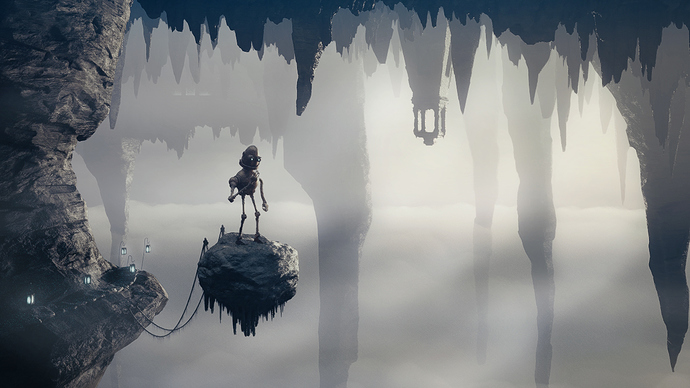 Everything is separated to proper renderlayers, with the main composite being done in Blender and some touchup and paint in Photoshop. 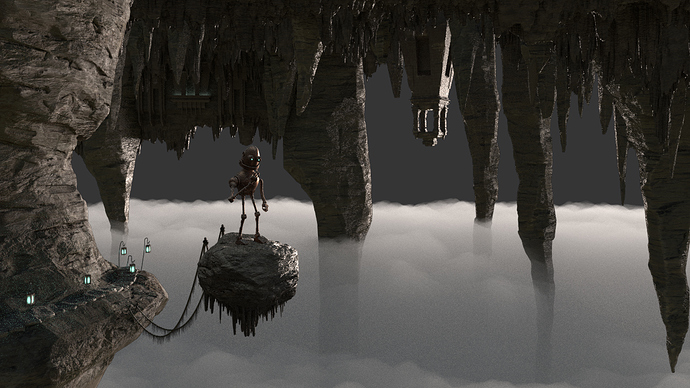 When I went to try the composite, the spatial relation of the robot’s island and the side pillar wasn’t clear at all, so I added some ropes to help connect the two. I also resized and repositioned the island to better match the scale from the concept painting.

Todo: more cloud layers and possibly a painted background so the horizon isn’t as harsh, a couple more floating islands in the distance, and something about the lighting isn’t working. It might need to be softer, or maybe the godrays aren’t a good direction to go.

Great stuff! Love the hand-crafted feel of the stalactites and other environmental modeling. Very much feel like you can feel “the hand of the maker” in it!