Looking for Critique on a still 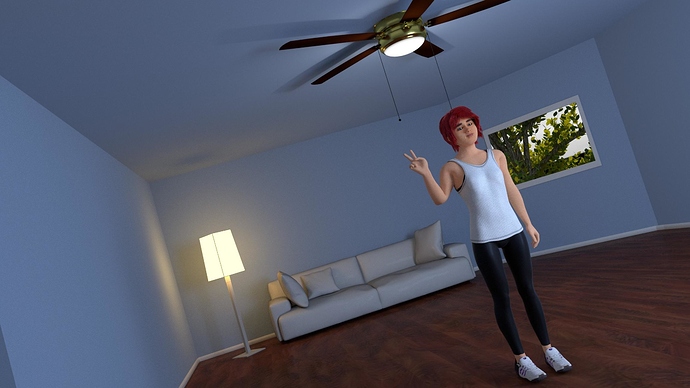 room test 2 lilly.jpg2300×1294 178 KB
I created a still frame to test the character for a current project that is similar to a comic book. I’m looking to get an art style that is consistently close to reality, but i prioritize stylization and emotional impact over perfect photorealism. While I’m only breaching the surface of basic lighting and composition, I’m looking for critque on elements of design, materials, lighting, and composition. The scene is very basic with not much in it and I have a friend to help with interior design, but im looking for important fundamental changes that need to be made to make the character and scene more impactful.

Problems I feel need to be adressed: Not entirely sure how to make the leggings that soft material where the tangent faces fade to lighter tones, but the front facing materials become reflective. I dealt with layer weights and glossy diffuse mixes, but couldn’t get the desired effect.

When i did subsurface scattering on the lamp shade and put an emission shader beneath, it didn’t illuminate the room as well as i would have hoped and could only get the effect i wanted by putting the emission shader on the lamp shade which makes it look like an LED screen surface on all four sides and left the cieling above to have a patch of missing light where light should have been even more prominent.

aside from this, spacial design elements and posing of characters is not a current concern for this thread, as this scene was pieced together for demonstrative purposes to reference as the project moves along.

Skin textures and model made with MakeHuman.
Currently using blender 2.77
Rendered at 400 samples

I will accept any and all criticism.

To remove that under-lit ceiling patch, I would recommend just adding the light back into the lamp (keep the emitting surface).

The materials for the room are good, but maybe you should consider adding a drywall displacement/normal map.

At the moment, everything looks rather plastic y, the materials is one thing to work on. I think the girl’s skin looks too flat and could use a subsurface shader if you haven’t got one already. The flatness may also be a lighting problem, experiment with different lighting setups, even try using unconventional colours, such as purple for that extra stylised look, which i think will suit this render well.

Your character’s pose is quite basic. A good pose should be able to show the character’s personality. I strongly suggest you watch this video: https://www.youtube.com/watch?v=ZmLkVtqjf1A
Also the tilt on the camera seems a bit out of place. Usually a tilt is used to emphasise movement, yet the character’s pose is static. You might want to consider a way to relate the composition to the character’s pose. Here’s a great example of what I mean: http://olegpaint30.cgsociety.org/art/katarina–league-legends-fan-art-2d-1351933