Hey, I’m making a rig of the astronaut from the game “Space Engineers”. After importing the model, I converted the tris to faces and removed doubles. I do the rig first and when I was happy with it, I decided to texture it. I opened the texture in the UV editor, but since it was from a game, they seem to automatically line up with the texture (I don’t know why). But I noticed some UV “Faces” stretching across the whole image. 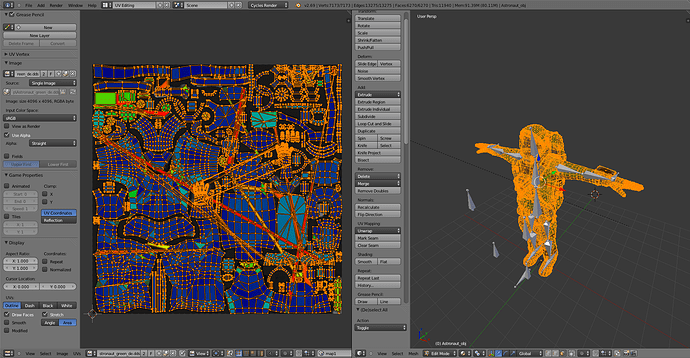 Will I have to manually fix it or deal with it? I feel like it has something to do with converting to tris to faces (Alt+J) or removing doubles. I tried to minimize stretching, but it had no effect. I might even just start the rig over. It’s my first rig and has barely any attention from the Space Engineers community. The rig was pretty crappy anyways. Well, scrapping something and restarting is part of learning.

I hope I can get some help from you guys. Thanks.

You could try this. select all the uvs, hit P to pin them. Select just those uvs that have gone wild, there only appears to be 10-20 of them. With them selected hit alt-P. Then unwrap it again and hopefully they go to better positions. Or you could just move them by hand.

It was already unwrapped and had uv’s for the texture you have there - by converting to quads and removing doubles, you deleted some of the mesh and it looks like you have errors in the uvs now because of the deleted verts. Maybe start over without taking those two steps, adn that way the uvs won’t be broken - and then make a full copy, rename it, and do your quad and remove doubles, etc. Unwrap that one, and bake the uvs from the one model to the other (in the same position).