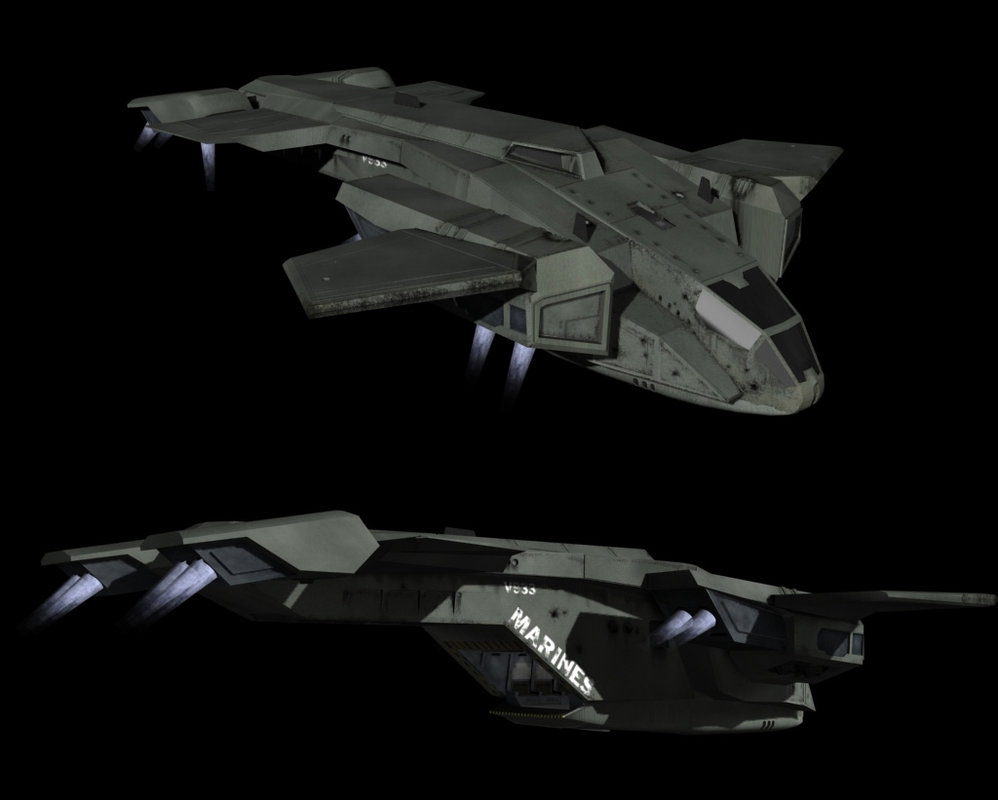 I thought i'd try something new. I've never seen any other fan-created Halo 3D stuff. Let me know what you think. I'm working on the Warthog now, actually. I plan to make a scene with these two may... A few days ago a Blender modeler who happens to also model high poly SST models from the movie & show contacted me about reference material for the Valley Forge. He had seen my low poly model somewhere and asked if he could use any reference... 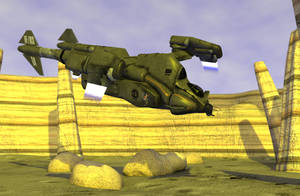 This is a model I built a few years back of the Retrieval Ship from the CGI show, Roughnecks: Starship Troopers Chronicles. I absolutely love this design and actually prefer it to the dropship on A...

yes i have looked at them. while some are close they are either to high poly are just not right

Do you have any concept work at all? I might be able to model a ship (it won’t be very good…) but I can’t design one. I could model one of the ships you posted, but that would just be copying an existing ship. 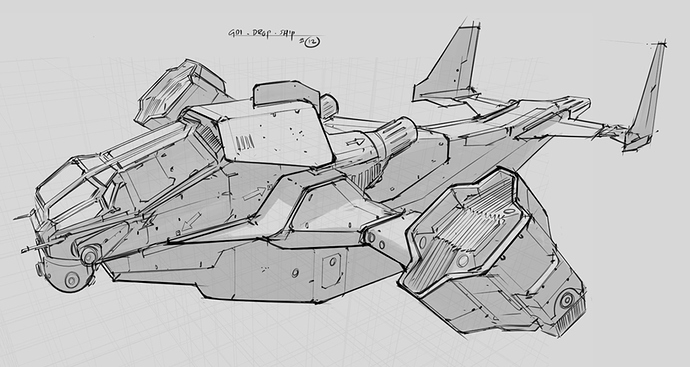 could you model this do this and the back door is separate, and it needs landing feet but i will take care of those

you don’t have to model every thing cause i want it to be on the low poly side and i will had a normal map map to it.
also are you able to texture it?

It’s a very nice concept. However, it’s clearly not yours. It would be fair to give credit to the Artist who draw this.
Your handwriting is awful. What are these notes? “erlloz rotcbe” "lardirg peef?

I wonder why you show 3 complete diffrent concepts of a small SciFi Troops/Cargo - Landing/Drop Ships?
Maybe you are also not sure what you want.

I can recommend this Model of Dennis Haupt (DennisH2010)

Here is a futuristic combat jet i have designed, modeled, textured, rigged and animated for our game-project. I inserted control bones for the easy control of the moving parts of the plane, as you can see in this gif animation. All animations are...

It’s also a “Drop-Ship”, but it does not have a Backdoor. It also shows a few more features of a regular airplane, but besides that, it’s very good rigged and textured.

Thank-you for your concern. I write with a draw pad… and it was late at night. I have tried the landing craft you are suggesting and even animated it in the scene. It doesn’t really work in the scene. As for me drawing a drop ship, I can do that, but doing that already for a game studio in Dallas ( scenery concepts) and I was tired.

also the drop ship does not open in blender 2.49 where i have the scene.

I could model the ship you posted, but are you sure it’s legal to use someone else’s designs? I didn’t mean I wanted concept art (as opposed to renders) from an existing ship, I wanted a design to work off so I don’t have to decide which of the 4 cockpit styles is best, for example.

I could model the ship you posted, but are you sure it’s legal to use someone else’s designs? I didn’t mean I wanted concept art (as opposed to renders) from an existing ship, I wanted a design to work off so I don’t have to decide which of the 4 cockpit styles is best, for example.

You wont run into any problems aslong:

Nice to see that atleast some people care about, whether it is legal or not.

um i contact all artist before i use their art. or it is in their info page. but the fact is that i need/want a particular type of drop ship for this scene and the ones i listed are close to what i want/need.

here is the short animation script

fade to a mother ship passing by the camera then the drop ship flies by. camera rotate to track it to the planet.

cut to new view over the Mineox Research lab. radio chatter and the landing pad doors open and the drop ship lands

once down the back door opens and the main character steps out and looks around. there is a female voice over the intercom. other characters are taking innovatory of some cargo that will be loaded on to the ship.

end scene (like i said shot animation for now)

It’s a shame when people just steal others’ works so I avoid it.

So then I will make that last ship you posted as closely as possible. About what range for polycount? I assume you’re doing all the animating yourself and I’m just supplying the model?

4-7k verts, i don’t care if it isn’t perfectly smooth or detailed, the normal map will deal with that, so i don’t care if it is on the low side. the wing engines will be separate so i can animate them also with the back door,the landing feet will be separate also. the fins do not need to be separate. in the image^ i posted up above^ you see a door on the side, just leave that in the texture detail, don’t really put a door there. the in-side (cargo-hold/ troop hold) needs to be a good size but not huge and basic as it wont be shown for to long but some basic seats are needed along the sides. 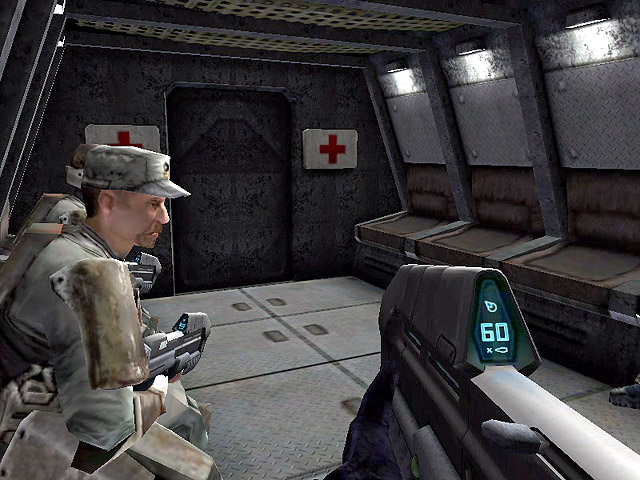 halo ce
image by me in halo 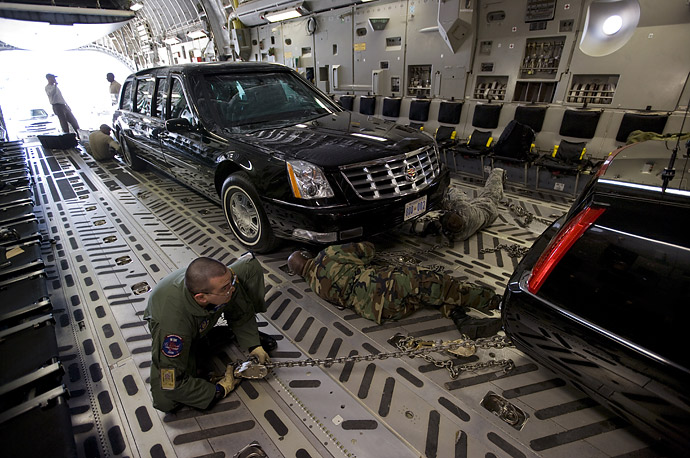 um i contact all artist before i use their art. or it is in their info page.

i don’t believe you. You dont have any respect for the work of other artists.

weapons made off of concept art found on google.


In the Info you write:

weapons made off of concept art found on google.

And in the Comments you write:

these were so fun to make i want to do more of them and then give them away for free to all you guys.

That’s illegal! You can’t do things like that.
Well i dont wanna Spamm the whole Thread, because i am angry of you,…

I just want to mention that the 2D Art of the Dropship (Post #5) is from Feng Zhu (a very talented 2D Artist btw), becasue you did not mentioned him.

actually i did give credit to the artist who did the swords every-time i get emails asking who did it. also in you you tube video. . i did those for practice. i email the artist and ask for permission and as long as i don’t email the models or claim they are mine they are fine with it. also you took the comment out of perspective. in the conversion i was having with several artist at the time i was modeling swords and i was asking around for permission to do others. i was also doing swords for those artist who drew them and wanted them in 3d. several times i asked if i could link the model (with out texture) for download and this was acceptable to them. Other sword concepts were also open domain and i stilled asked for permission.

for future reference please ask me first before attacking me.

the model i can give away but not with the TEXTURE!!

also as for the drop ships. I can use it as a reference. it is like modeling a jet or a helicopter or the Star trek Enterprise.

it is for a non-commercial animation. More if a test of my skill. like what machinima does.

look all i wanted was a model drop ship for an animation not a thread conflict. people put up reference’s almost daily, do you attack them.

also i did not claim the swords were mine. i did find them on google long ago. i did not say that
i made the concept art and the swords.

Wait, so did you ask Feng Zhu if you could use his design or not? It doesn’t matter whether you claim they’re your designs or not, you can’t just use someone else’s work without their permission.

This obviously isn’t a “test of your skill” since I’m the one building the ship… If you just want a random dropship for animation, download one that someone’s explicitly put up for free download. Otherwise give me specifications to make something original.

Guys hold on. Using concept art as a reference and not mentioning the artist is legal. You are not stealing their work. You are making a 3D model. It is kind to mention where you got concept art, but not needed. You are not using their work… You are looking at refrence for your work.

“stealing from one source is plagiarism. Stealing from many is research”
or “references” to artists

Using concept art as a reference and not mentioning the artist is legal. You are not stealing their work. You are making a 3D model.

Funny, very funny. It is “fair use” only if you are doing it in educational purposes, but if you’re going to make money from that model or game/animation that’s illegal.

because you want “original work” i am hiring a artist from deviant art to draw one. i am paying him in my last dev’ art points. I am not a 2d artist and i will not show the ones i tried to draw do to the fact they look bad. i am an environment artist. i have not done vehicles much.

this way i can stop the arguments…everyone happy now.