Hey guys I havent posted a finished render in quite a while so I thought I would post the following finalized dead forest bridge scene render from a project I’m working on with several other artists around the world. I’ve been focused on all of the exterior dead forest scenes…modeling…texturing…lighting and rendering.

There are something like 16 different particle systems, HDRI lighting, custom sky image texture, Z-pass for fog and some compositing. Everything is done in cycles…however some smoke/fog simulation may be added later from BI.

We are currently in the character animation stages. But I figured heck:P the environment for this scene is finalized so that makes it a finished work:) Look for the Luke’s Escape Trailer in the next few months:) 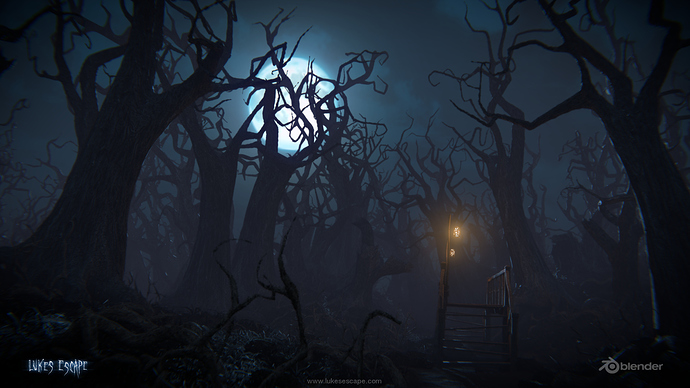 Thanks guys we appreciate the support:P I have to say…in regards to cycles…this has been one of my favorite scenes I have created. Definelty a lot of work and great teamates makes it all possible. Glade to hear the creepy feel is coming through…that of course is the main focus:P More to come guys so please follow along.

Dude, did you make that entire scene, or did you get help from the rest of your team? I’d love to know who the rest of the team is…
You rock at nature BTW, and this is awesome.

Thanks man that means a lot. In this scene I did 95% of everything including modeling, texturing, lighting and compositing:P With some help from Waqas (the director) and Reyn (I’m sure you’ve seen Reyn stuff on here:) ) I did join the group and began with a few simple modeled trees and some concept sketches. But that gave me the look or style of the trees to go for so I went with it. There are 4 other scenes like this one but with other focal points of course:) This was the first scene I began with tho. Our team is pretty large and has guys and gals all over the world. Check out the website lukesescape.com…a new website is under construction but you can take a look at other stuff we have completed in there:P