Here’s an early render of an M3 MGC halftrack currently under construction. This model will be used in the upcoming feature film entitled “Thousand Yard Stare” which is currently wrapping up filming and should be released next year. Constructive comments welcome. 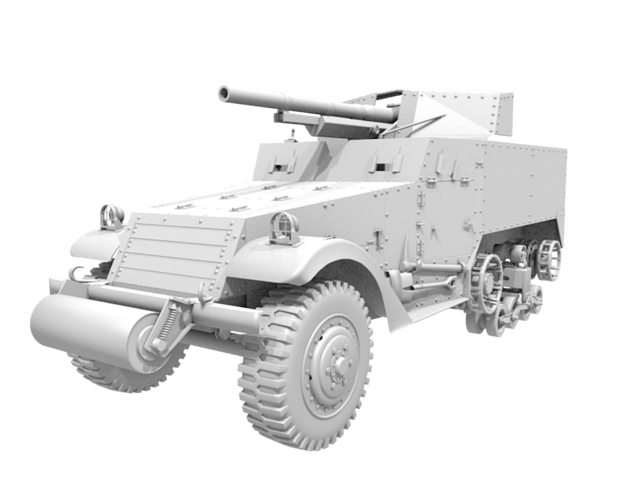 Looks pretty sweet! Its like a cross between a hum-v and tank :D. Any chance you could post a wireframe? And maybe a brief description of the movie its going to be in? If not, I understand.

The M3 was originally designed as a troop carrier but received many different modifications. One version had a quad anti-aircraft gun mounted on it. The version shown above has a 70mm gun and was employed as a tank destroyer…with marginal success. The M3 was a very common vehicle in WW2 and was used extensively in Europe as well as in the Pacific.

The movie “Thousand Yard Stare” is a WW2 action/drama focusing on the battle of Kasserine Pass in North Africa in February, 1943. I can’t really tell you anything else right now but the theatrical trailer should be out by the end of this month. Thanks for your comment.

can you show other views

i began one like that but never really finish it
did not have good references pic for it anyway and more then one model too!

are you going to texture it in cycles?

When I was in my teens I had a plastic model kit from the M3. Its realy done well on a lot of features and I do recognise them. The details must have set you back some time. Ah well good luck with the movie.

I still prefer to use Blender internal…Cycles always seems to be grainy. The only reason the above render seems that way is because I have the resolution turned down (5 samples) to speed up the render process. I am not an easy convert. I will be posting more renders as it gets closer to completion. Thanks.

Cycles has changed and don’t see much grainyness lately !
and i find it much higher quality then internal blender !
but may take a little more render time

When the movie trailer comes out I will post a link. 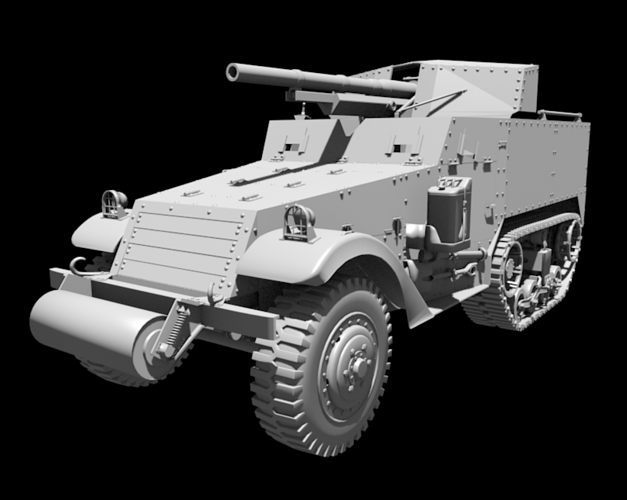 got a question about this machine
what was the roller doing at the front ?
to make some sort of pie !LOL

looking very nice
texture should make it look even nice !

The roller was to assist the vehicle in getting over obstacles such as debris. Good question and thanks for the comment.

Here is a link to the teaser for “Thousand Yard Stare”. This is not the theatrical trailer but just a one minute preview. The completed movie will have a number of models built in Blender: a Stuka dive bomber, a P40 Warhawk, one or more German tanks, tents, tank traps and of course the M3 tank destroyer. Unfortunately none of these models are complete yet and so do not appear in this preview. Enjoy.

Wow , what a nice insight. Very pro movietrailer. Am very anxious to see how your model will fit in, in the movie. At the blender conference there was somebody (forgot name) who was telling how he got flocks of birds made in blender in a lot of hollywood buster movies. Cool, keep posting please.