Makehuman Deforms When Posing in Blender

When I import, and pose a Makehuman model in Blender, I often get severe mesh deformities if I move a limb or whatever a little too much (see screenshot). Are there Best Practices for preparing a model in MakeHuman to import into Blender? Such as which rig to use, etc? Thanks very much.

The shoulder is probably the most difficult part to rig, and poses with arms above head are especially difficult to get right when the rest pose is A-pose, because it means that the arms are far away from rest.

That said, you have probably chosen the worst pipeline from MH to Blender. Judging from the looks of the rig and the fact that you have a deltoid bone, I suppose that you have exported the Basic rig with Collada from MH 1.0.2. Even so, the deformation is extremely poor, and you should be able to get a better result by tweaking the clavicle, deltoid, and upperarm bones. However, there are several better alternatives:

Download the development version of MH and use the Default rig. It has much better deformation behavior than the old rig, still using only bones and vertex groups, no constraints or shapekeys. There used to be a nightly build but I cannot find it anymore. The source can be downloaded from https://bitbucket.org/MakeHuman/makehuman/downloads, but requires that you have python 2.7 installed.

Export the character with the MHX2 importer and import into Blender, overriding imported data and adding the MHX rig. MHX2 is a separate plugin for MH and Blender. Make sure to download the unstable version which has better deformation. It can be found at https://bitbucket.org/ThomasMakeHuman/mhx2-makehuman-exchange/downloads. Documentation is here: https://thomasmakehuman.wordpress.com/.

Here are some poses which put the shoulders to test. In the second pose I added a subsurf modifier to smooth out some wrinkles, but you probably only want that when rendering. 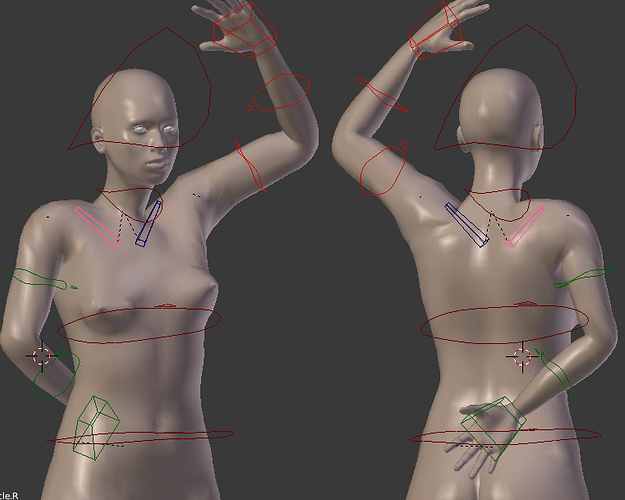 what is maketarget doing for?

Thomas, I’m not a programmer at all, so I spent much time researching how to install the latest, unstable nightly build of MH (http://www.makehuman.org/download_nightlybuild.php ) , Python, and the MHX2 exporter. However, I’m now completely stuck because the MHX2 exporter does not show up in latest version of MH. I made sure the exporter is in the Dev version of MH plugins folder. How did you get it to show up? Thanks

Thomas, I finally got everything working. This procedure works SO much better. Thanks a million!!!