makeover of an old model

I decided to try to make a more realistic version of one of my older models. She’s one of the characters in a story I’m writing (a whole 4 pages in only 2 months, yay).

This is the model I’m remaking:

So far I’ve only made the head. It’s my second serious attempt at modeling a proper head. Here’s a picture of the mesh:

I played around a bit with the colors:

Now I just gotta give her back her horns and figure out how to make proper hair. And ears. Oh yeah, and her whole body and all of her clothes >_<

That’s quite the improvement!

Yeah, it’s looking good…and one step at a time my man. Don’t stress…lol.

Woot, I managed to make ears! The mesh is a bit messy where it connects to the head, but they’re all quads, so I hope it doesn’t matter that much. I followed mr_bomb’s tutorial to make the ear, which was easy to follow even though I didn’t have a reference picture in the background

I don’t know where to go from here though: should I make the hair first? The body? Eyes, or textures for her head? Maybe I’ll give her some ear rings before I start on anything else xD

Edit: I pushed a few vertices here and there, and I think it looks a little better now:

Hey, it looks great so far, there’s really not a whole lot I can say about the look of the face except that it’s a VAST improvement over the old one. XD The shape is very nice. The only thing I can say is that the forehead looks a TINY bit too square, but we’re talking miniscule, here.

Also, save the hair for last. firstly cause you want everything else to look good before changing it, and secondly because there’s a guy who’s working on an amazing remake of the particle system which will make hair:

There may be something that can be done with the eyes to improve them, but it’s too dark to tell. I know I, myself, get that complaint a lot in my stuff, and it’s sortof annoying, but if we could have a lighter shot, that’d be good.

(May I here complement you on your ears? They’re beautiful.)

I did notice one thing about the eyes and that is that there’s not enough detail. They look kinda… stretched. Also. An amazing trick for the eyes is the spiral loop, if you don’t mind a little time-consuming fiddling.

Anyway, these are mostly just suggestions, and I’m not @ndy or the M.p.h.e, so they should be taken with a grain of salt.

Thanks a lot for the feedback! I noticed the forehead thing, I smoothed it out a just a little bit. I guess I’ll save the hair for last, then. I’ve experimented a bit with hair already, but it’s hard to get anything other than slightly wavy spikes.

Glad you liked the ears :). I tried to give her elf-like ears while following the tutorial, so I think it lost some details while I made it… not to mention that I’m lazy and looked for the easiest way out while modeling it. I plan on giving her an ear ring on the upper part of one of her ears, but first I think I’ll take a break from them and start on her body.

When I come as far as texturing, I’m gonna try to give her impure skin, to make her look a little more natural (even though she’ll have red skin, yellow eyes and horns). I’m not looking forward to the unwrapping part :

Oh, and I’ll post a brighter picture next time xD!

how did you get the bloom lighting effect?

how did you get the bloom lighting effect?

In blender, press ctrl + right arrow twice to get to the sequence layout thing. In the middle window you can load scenes, sounds, movies and images. I rendered the head and loaded the image, then I added the effect called Glow. To render out the picture with that effect, click on Do Sequence in the Anim tab.

I started on her body. So far I’ve made the basic shape for her torso, and tried to shape up her arms. I’m close to being satisfied with it, it still needs some tweaking here and there. After that I’m gonna model her hands. 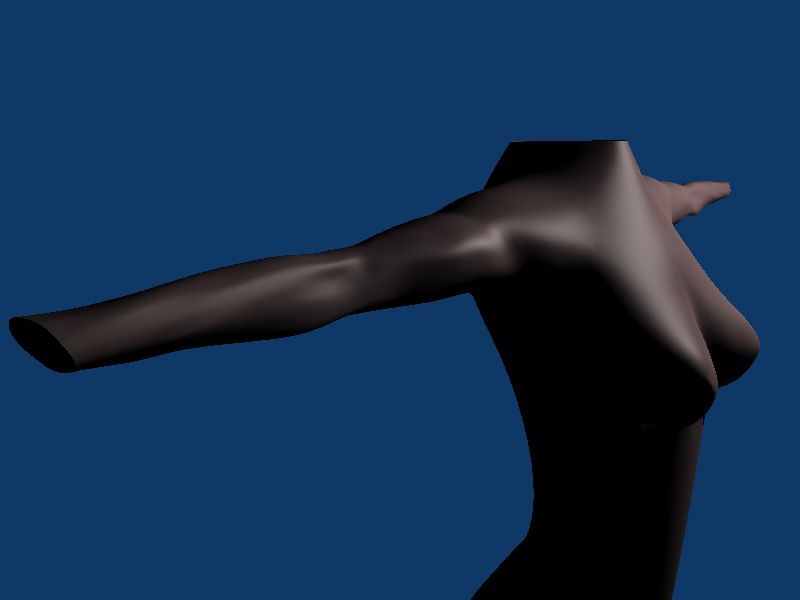 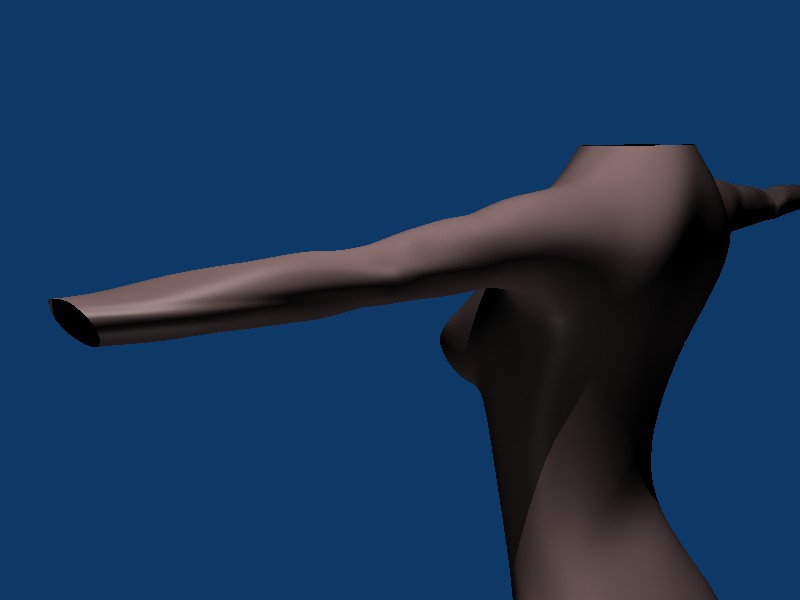 Ok, the body is where we really need a wireframe shot. It’ll really help pick up some of the kinks.

By the way, you’re gonna add the spine, right?

Oh, forgot to upload the wireframe! I’m gonna give her a spine, yeah. 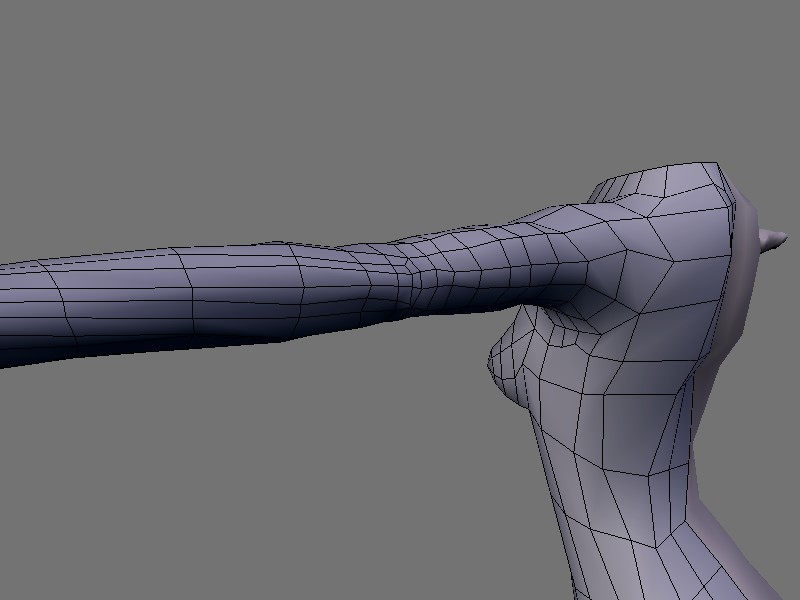 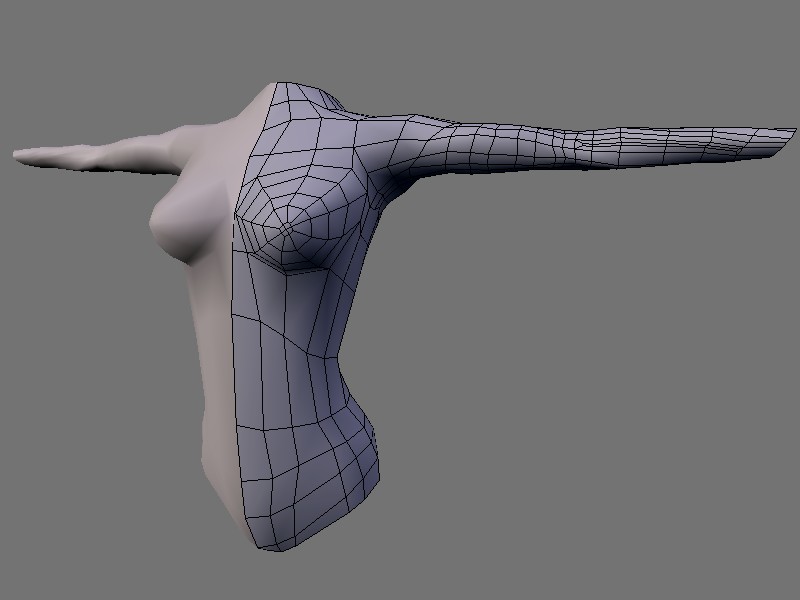 Impressive. I wish I could make models that good with that few polys. XD

Hmm… The breasts look a little elongated, horizontally. Also, the inside corners don’t quite start at the middle of the chest. I’m not sure if I can post a reference pic or not. :]

Hey, if you extend your arms out to the side, the hand naturally faces palms forward, palm-down leaves a twist in your arm. I notice you have a twist in your lower arm, there, so I don’t know if that’s what you’re planning to do. It looks a little kinked in there, though.

Man, I must say I’ve very impressed with your torso, though. Those things always screw me over. I’m gonna have to redo a female character I’m working on because of my loathesome failure to accomplish this.