Hey everyone! Okay for the longest time I have been trying to figure out a way to make a Myst-like game, I had given up on the BGE for a while until I found a game called, “Escape the blender art gallery” which I know was made in the game engine. So I hunted everywhere for how to do something like that and found nothing. I was wondering if anyone knows if the .blend of that exists, or better yet, if someone actually knows how to make one of these games.

hi you mean this? http://jayisgames.com/archives/2009/09/escape_from_blender_art_gallery.php it’s in flash. maybe it’s rendered in blender but it’s created in flash…

I’d really like to see a way to do this too.

Maybe a set up like the below would work:
planes with renders mapped to them and shadeless turned on
nulls at the origin of each plane
a camera that tracks to a new null when a button is pressed

It seems like it would be hard to manage complex games in this way though. Any better ideas?

Yeah that was it, even if it wasn’t done completely in blender, there has to be a way to make the game engine make something of the equivalent.

There are only a few things that would have to be done:

I know these things can be done in the BGE but I haven’t been very lucky in digging up any tutorials on the matter. If anyone knows how to pull off any of these tricks I’d be super happy.

I like Blusock’s idea but I want to be able to make an entire scene and then go through it. I’d prefer not to paste renders on planes (though it would probably work)

Another suggestion, have a look into the Wintermute engine. It’s completely free and can be used to easily create Myst-like games provided you’re willing to read through the documentation and learn how the engine works.

Wintermute is a great engine, I’ve used it to make both third and first person adventure games. However, adventure game studio is in my opinion better then wintermute(especially if you can program in c++)

The reason I made this thread was to see if you can do what these engines do IN BLENDER. Eventually I would like to make a template for anyone who wanted to do a similar project. So back to the original question: Anybody know how to pull this off?

So back to the original question: Anybody know how to pull this off?

Perhaps you should have asked instead if anyone who knows how to pull this off has time to explain it or actually pull it off. I for one do not.

Ok you don’t have time to explain how to do this but you clearly have enough time to post mean comments just to prove you’re more blender smart then the rest of us? What was the point of that anyway? Isn’t this forum supposed to increase people’s knowledge of blender? I wouldn’t have asked a question if I wanted sarcastic and mocking replies.

but just to humor you:

Could someone please post how to make a first person point and click game and explain it?

After all the first few posts didn’t even remotely ask that. Be nice or go away! Aren’t moderators supposed to be really nice and cool and broaden the community’s intelligence?

I don’t think blendenzo was trying to be mean… maybe his connection dropped suddenly.

I posed a similar question here with an idea about how it might work:

Ideally the process would be to place an invisible object for each “node” in the scene (plane that’s always looking at the camera, or a cube). In the game clicking on a node would then translate the player’s location to that node. In this way the process of defining and refining node locations would be very fast – rather than the tedium of setting multiple cameras/IPOs for each

There were some great suggestions, too but it all boils down to learning python… which I’d love to do – it’s just been difficult to prioritize.

blendenzo used to be a “cool” person…weird?..
Anyway, he gently shares with us ( you) his great GE knowledge, here:
http://www.blendenzo.com/indexTuts.html
You probably, will find something useful for your “game”, in there!
Bye

Ok you don’t have time to explain how to do this but you clearly have enough time to post mean comments just to prove you’re more blender smart then the rest of us? What was the point of that anyway? Isn’t this forum supposed to increase people’s knowledge of blender? I wouldn’t have asked a question if I wanted sarcastic and mocking replies.

I apologize. I apparently miscommunicated. The internet has a way of making it sound like one is being a jerk when one really is not. There was no intentional malice in my previous reply. However, please be aware that you are also miscommunicating. It almost comes across as though you are asking other people to do all the real work for you and that you are unwilling to learn how to use the GE for yourself. Additionally, you sound like you are whining.

Just to clarify a bit, though: It takes 1.5 minutes to reply to your post the way I did previously, but it would take hours to write out a reasonable explanation of how to do what you are asking. As a token of my kindness (that is, to show how really nice and cool I am), here is the “five minute version” (that took between 15-20 minutes to think through and type out) of how I would do it:

Model the environment in 3D.

Set up a network of nodes for camera positions. I would probably use empties. Parent the camera to another empty, and when the player wants to move, move the camera parent empty to the next node. I would control this via a python script. I would use slow parent on the camera to cause it to animate from one position to another.

The problem with the nodes system is that it does not allow for camera tilting and other such things. This could be solved in various ways. Perhaps the easiest would be to give each node a “tilt” property and cause the camera to animate to that tilt when the player moved. Again, you could apply the tilt immediately to the camera parent and the slow parenting would fill in the animation for you.

A Python script would be the best way to control item clicking. Putting a Mouse Over sensor on each and every object will drag your frame rate down in a hurry. Instead, use a single Mouse Over Any sensor connected to a script which would check the moused over object for a “clickable” property or some such thing. Also, use proxy collision meshes for all but the simplest items, since the higher the number of faces in an object the greater the physics drain created by testing for mouse collision.

When a clickable object is moused over and clicked, I would set a property on that object called “clicked” to true. When clicked is true, carry out the clicked event. Alternately, you could use the state engine. Decide that a certain state will be the “clicked” state for all clickable objects, and add that state when it is clicked. Have the click action occur, then disable the clicked state. This would probably be the better way, since it would reduce the logic drain caused by having all those property sensors running at once.

Regarding the four items you requested tutorials about: Multiple tutorials have been written on each topic. Most of your questions can be answered by searching the Resources board on this forum or following one of the tutorial links in my signature line. I highly recommend tutorialsforblender3d.com. I have a basic save/load tutorial on my outdated website, and there are several newer save/load systems you can look at in the Resources board of this forum (I found at least five threads about different save systems on the first page of search results here: http://blenderartists.org/forum/search.php?searchid=7500684 )

I am working on exactly a first person point and click adventure game!
check some screenshots http://etyekfilm.hu/ironsteam/

A little off topic but I just had to say they’re some impressive screen shots endi, love the art direction. Is the environment rendered in real time in the BGE or pre-rendered?

A little off topic but I just had to say they’re some impressive screen shots endi, love the art direction. Is the environment rendered in real time in the BGE or pre-rendered?

this is realtime of course, as an fps game but without shooting

you can check some anim in my reel (rendered with BGE): http://www.youtube.com/watch?v=7lBH6h9X89E

Okay I take back everything i said about moderators. The fact that Blendenzo actually replied back with a real helping answer made me dance with joy AND knowing my avatar made me sniff cry tears of joy. (NOT SARCASM, BLENDENZO IS AWESOME!!!)

Anyway, sorry if I sounded like I was whining but I kinda was. I had just given up any hope of figuring out how to do this, now with ideas from a few people I am dedicated to making a decent tutorial for the rest of the people like me. I’m going to start working on this project, so if anyone comes if with anything they think would help, please say something.

AND knowing my avatar made me sniff cry tears of joy.

One of the first comic books I ever purchased was a graphic novel entitled Captain Harlock Returns. (I bought it several years after its publication date.) Here is a picture of it I took today. 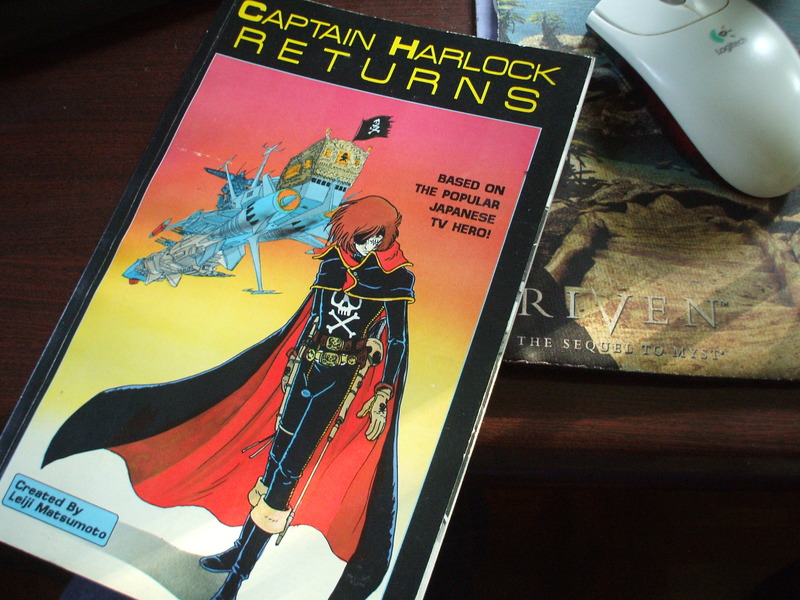 Oh my gosh!!! (fangirl squeal) you just made my year with that picture, I would kill to read that!!! It’s so cool how you’re helping on an adventure game thread with a Riven mouse pad, ironic and amazing.

The funny thing is that no one else who comes on this thread is gonna have any idea who captain harlock is, shame for them huh?