I need to make ellipsoidal dimples in a mesh. [Imagine a flat area of damp sand where you pushed an egg a little way into the sand then removed the egg]. I thought there was a way to modify/sculpt a mesh with another mesh, but can’t find it now. That is, I want to make a mesh1 shaped depression in mesh2. Suggestions would be welcome.

byt you also cut your egg in 2 and use this part to make your other object !

Thanks Ricky. I was hoping there was a method other than shrinkwrap. It’s not obvious to me how to limit the vertices that are shrinkwrapped to just the ones to form the dimple.

If I understand correctly, your second suggestion is to do a boolean operation. The problem is, I’m making content for a game where I need to use a minimum number of polys to keep the frame rate up. As you know, booleans sound great in theory, but tend to make a lot of very messy polys.

If I can deform mesh2 with mesh1, I can divide up mesh2 just enough to make a smooth mesh1 shaped dimple.

Right now my best choice is to make the shape in a parametric modeler (either Mechnical Desktop of SolidWorks) and import it into Blender–but that’s like cheating.

I think Ricky Blender was not talking booleans?

If you cut an 8 Ring 8 Segment uv sphere in half.
Change shape to that of an egg.
Then build your plane out from the edges.

Remember to subsurf it.

Hummm, minimum polys. Here is 4 poly imprint done manually; pull one vertex down and move two outer vertexes. Picture below shows with subsurf on it. 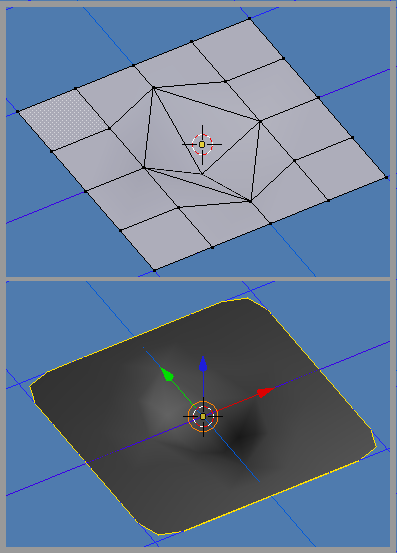 sorry if i was not clear for the egg

i mean an egg shape is done by adding a UV sphere and scaling along one axis!

any one can make a simple dimple but to make it part of amore complciated design might be easy or a nightmare
like depends if using Subsurf or need optimum mesh ect,

Thank you pixeltwist, ridix, and Ricky. Ricky was right. I should have provided more information. My simple example in the flat sand was misleading. I want to put the dimples in the almost conical surface of a pommel for a sword I’m making. I’ve made a quick approximation in Mechanical Desktop and imported it into Blender to give a more accurate idea of what I’m trying to do. See the attached image.

well i can see use of the spin dup tool here

then apply the spin tool dup

but depends on how many segment you need to optimise your mesh for your application!

Ricky, I understand. What you described is my “Plan B” (as Maxwell Smart used to say). I think I’ll just do it in Mechanical Desktop (MD), but will use spin dup. The mesh imported from MD is a bit messy. So rather than cleaning up the whole thing, I’ll clean up just one segment, then spin dup it, as you described, to make the rest.

BTW, since no one has described an easy way to make the dimple directly in Blender, I’m thinking I saw that in Modo. It has the equivalent of a sculpt mode, but you can have a user created mesh as the sculpting “brush”. Surprisingly to some, although I bought Modo, I much prefer Blender!

try it with the model i’v uploaded

and there you re should not be long to do

I did one in about 10 minutes

try with subsurf will giove a much smoother top

but bring the egg inward a little!

but depends how nice you need this !