Masking or not groups of objects and meshes in the same time.

Hi,
I’m looking for the best way to mask (or not) some objects and meshes together.
Exemple with a house:
Render 1 - all objects (walls, windows, furnitures…)
Render 2 - Render 1 except the part of wall to view inside the room.
Obviously it would be possible to separate the part of the wall, but I prefer to keep it completely to get a perfect texture all around the house.
I’ve tried applying the mask modifiers but it means to active them on each objects anytime you want a new different render.
May be possible using weight mesh value…
Hope it’s clear for you due my poor english,
Thanks for your help,
Patrick

You realise that including screenshots, showing what you want, blend files etc, is much easier to put across your ideas than just some vague non specific type of description !

What have you got, what do you want, why do you want it etc etc etc. You need to make it as easy as possible for someone to help you, otherwise we’ll give it a pass

OK, you’re right!
My question with this screenshoot.
Render 1: seeing home from outside.
Render 2: seeing the bathroom from outside.
For that, I need to mask complete objects (2 straight windows and the large one) and parts of objects (meshes) like bardage, wall, facade coating… (the side of the view only).
Thanks for your help 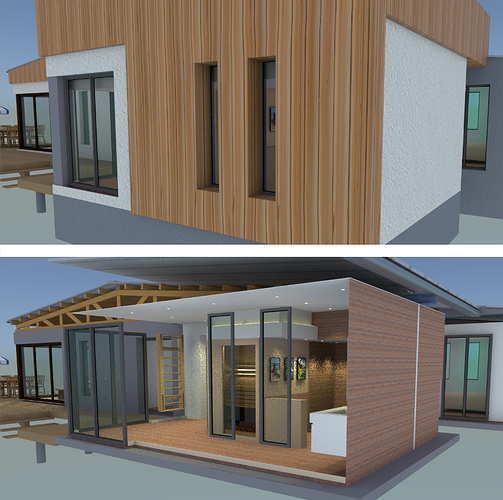 Ctrl+H to hide objects from render. Could use mask modifier to hide just part of the objects (defined by a vertex group).

Thanks for your response. I’ve tried vertex group with mask modifier, but let’s imagine several objects and several part of meshes from several rooms to mask or not…

Thanks for your response. I’ve tried vertex group with mask modifier, but let’s imagine several objects and several part of meshes from several rooms to mask or not…

It’s not as difficult to manage if you use same group name for each object and copy modifiers from active to selected with ctrl+L. You can adjust weights with vertex weight modifiers but not sure how that would make things easier. 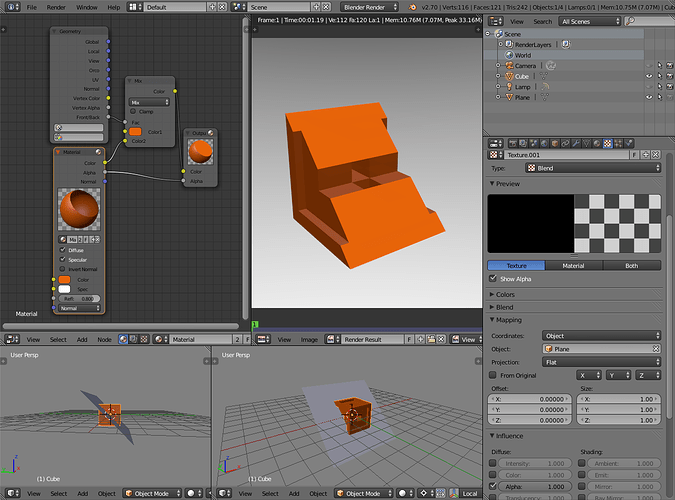 Material has a blend texture which uses an object (plane) to map coordinates, which makes the object transparent on one side of the plane.
patrickp78 (patrickp78) April 21, 2014, 7:38am #7

Many thanks,
I’ll tried all that and I come back to you.

If they are objects you want to mask out, just put them one layer and dont render that layer.

Nice idea! but I’d need more layers than 20!
Exemple: one view for each room I want to see from outside without masking others…
Hope somebody is working on a xyz plane modifier able to cut a complete project. But is a modifier able to run for several objects?
Many thanks

Basically you need 2 layers, one to show objects for render, one to hide objects for render. If you are saying that 20 is not enough for rendering purposes, then something is competely wrong.
You know you can change layer of objects after one render.

Sorry, I don’t understand.
For may architecture project, I have a layer for each floor, one for roof, one for garden, one for furnitures, one for lightning…
What is completely wrong?

Im saying that when you render, 2 layers is enough for hiding/showing objects you want/dont want to render.
And after that render you want to render another thing and you want to move some objects to layer which is not included the next render, and maybe bring another objects to layer which is gonna to be rendered.
So number amount (=sum) of layers has nothing to do how you can show/hide objects when render.

I’m not sure to understand all of your explanation due I don’t use render layers at the moment. I render with cycles from the viewport and I rarely launch a complete render…
May be you could explain me how to do because I don’t understand how it’s possible to work with 2 render layers without changing objects from their scene layers…
Thanks for your help