I’m pretty new to Blender, but am beginning to learn some basics. I’m a sculptor (among other things) and want to use Blender to create mock-ups for human figure sculptures. I need to create human figures that have a bronze finish. I’m able to add image texture materials, such as a bronze.jpg image, etc to regular shapes like cubes and spheres. However, I’m not having any luck applying the bronze image to human figures for some reason. I’ve found several human figures online, like Make Human, and have been able to import them into Blender, rig them, etc. But none of them want to take the image texture.

Does anyone know why these human figures might be different in such a way that something special has to be done to apply an image texture to the overall body?

it’s not clear from your question what exactly the issue is. but in any case, just remove all the materials in the human object and add a single bronze material to the object. adjust the settings to your taste and then add your texture.

I’ve removed all materials, then added the bronze.jpg… as you suggest, still no luck. What happens is, the figure renders as just a color with no image texture, or the image comes out as a black silhouette… and yes, I’ve got a light in the scene, and it’s properly aimed, etc. I suppose there are so many options in Blender, it’s hard to say what the problem is if I’m using a pre-made figure. I probably need to create a human figure from scratch, and go from there. anyway, thanks for the help.

You may be able to fake what you’re looking for with clever use of a bronze matcap.

Wow, Dyntopo is an awesome tool that I didn’t know about. However, with 234 pages of posts, it will take me awhile to get thru them all especially since much of it is still above my head. Meanwhile, can someone tell me… since I’m able to easily add materials/textures to simple meshes… is it sometimes more challenging/difficult to add materials to more complex meshes? Thanks

I have to do some research to find out what “matcaps” are. Thanks

Maybe simple box mapping in Cycles, it works well for preview though you can’t sculpt and see it until you return to render view. 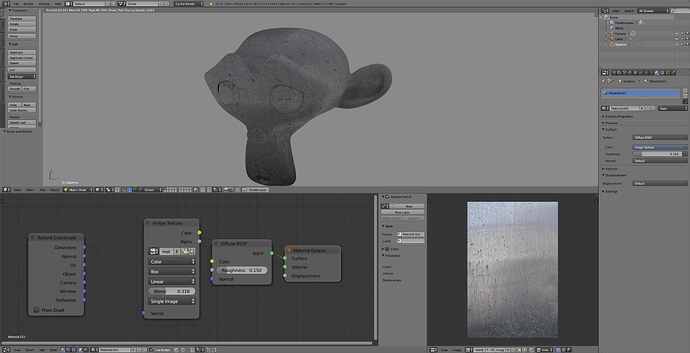 A MatCap (Material Capture) in a nutshell is a material that has color, lighting and specular information “baked” into it. They are often used in sculpting as a stand-in to setting up actual materials and lighting (since they’re lightweight realtime materials), but can also be used in a variety of other ways, including generating other materials and textures or postprocessing your renders: e.g. the model is rendered several times with different matcaps applied (or the materials are “baked” onto the textures), and later the images are combined in a painting program. A small illustration can be seen in this video by Roberto Roch.

Some releases ago Blender got a built-in matcap feature which can be enabled in the 3D View Properties panel (which you can open using N hotkey), in the Shading pane. But this feature is still limited, since users can’t supply their own matcaps, so people often use the “old way” of setting up matcaps, which can be seen in this tutorial by Ben Simonds. Incidentally, that tutorial also demonstrates how matcaps can be combined using Blender’s texture stack to create a specific look for arbitrary models.

As for applying materials/textures to complex meshes, it all, as always, depends. On how complex it is (the number of objects, are they all one mesh or separate, are they organic or mechanical, etc, etc), on topology, and, of course, on your goals. If you’re creating a full character that would be animated (for a game or for a cartoon/movie), then you’d be creating UV maps (“unwrap” the mesh) and painting (or otherwise creating) textures corresponding to those UV maps.
If it’s a render of a static object (i.e. you’re imitating a photograph of a sculpture), it may be a relatively simple material that perhaps may not use any UV maps at all (again, see the Dyntopo thread): as Craig Jones suggested above, even simple box mapping.
The level of detail you’re aiming for also comes into play, i.e. will you be using high-poly models (probably static renders) or low-poly ones (games, animations…) For low-poly maybe you’d want normal, displacement, specular maps, etc., so you’d have to bake them (in Blender or some other software).

This may sound like a lot, but as you get used to various steps involved, it mostly comes down to “what I want” and “how to get there”, as the basics stay the same no matter if you’re making a giant death robot or a cactus in a pot. There is a great deal of info on materials and texturing in Blender here on BA, on youtube, on blendercookie.com, and I’m sure many helpful artists here can help you with specific problems you might encounter.

Stan, thanks very much for your detailed definition of a MatCap. Obviously, I still have a lot to learn… and yes, it’s fabulous that there are so many Blender tutorials and posts that are helpful. MEANWHILE ONE QUESTION: I started creating a simple human figure from scratch. While still in very basic, single mesh shape, I tried applying my “bronze.jpg” material. Like the other figures, the render produces nothing but a black silhouette. Can someone please tell me what this black silhouette means? Thanks

It may mean different things, but the usual suspects are:

The fact that you keep saying “bronze.jpg” suggests this is an image texture, not a material. You would need to have this image mapped appropriately in the material for it to render correctly and you haven’t shown us either your material or texture settings at all. Normally you would uv unwrap your model but that can’t be the case if you are still sculpting. It would probably be better to use a procedural bronze material rather than a bronze image texture on a sculpt.

Well, I have light in my scene, and my material is not black. I kept fooling around in Blender and finally got my figure to take the image texture…although it still doesn’t look too good. Not sure what I did differently. (Sometimes Blender misbehaves?) And yes, K Horseman, I’m trying to use an image texture, not a material. I have to research “Box Mapping,” (as per Craig’s suggestion), and look into procedural bronze materials – not familiar with either.

Meanwhile, Horseman says, “Normally you would uv unwrap your model but that can’t be the case if you are still sculpting.” This implies that once you unwrap, you can no longer sculpt? Oops, didn’t know this. Wow, I’d hate to do a ton of work on something, then discover I couldn’t add a material/texture if I’ve unwrapped.

It’d help if you posted screenshots or your blend file to show us the problem exactly. You can use pasteall.org to upload images as well as blends.

Thanks for all the feedback and guidance, everyone. The more I post questions, the more I discover how little I know about using Blender. I think I’d better study some more tutorials, etc… and if I’m still having issues (which I"m sure I will), I’ll be back with more questions (and will upload screenshots, etc). And it’s good to know Blender never misbehaves!

He said “usually” not “always.”