For the past 8 months I’ve been hard at work directing a medieval movie. It contained possibly almost 200 visual effects shots that I did in Blender. It’s been the biggest project I’ve ever done and I’m glad were getting really close to finishing it, yet sad also because it’s been an amazing experience.

Here is my movie poster. Please comment. I feel that it is too bland around the top area of the poster and doesn’t contrast well with the bottom half. However others feel that it looks good as it is and they like the fact that the cluster of characters at the bottom and the two characters at the top make a sort of triangle shape. Please tell me what you think as I am very open to the suggestions. I feel it is incomplete yet, I don’t have any more ideas left for it. It’s the first movie poster I have ever made. 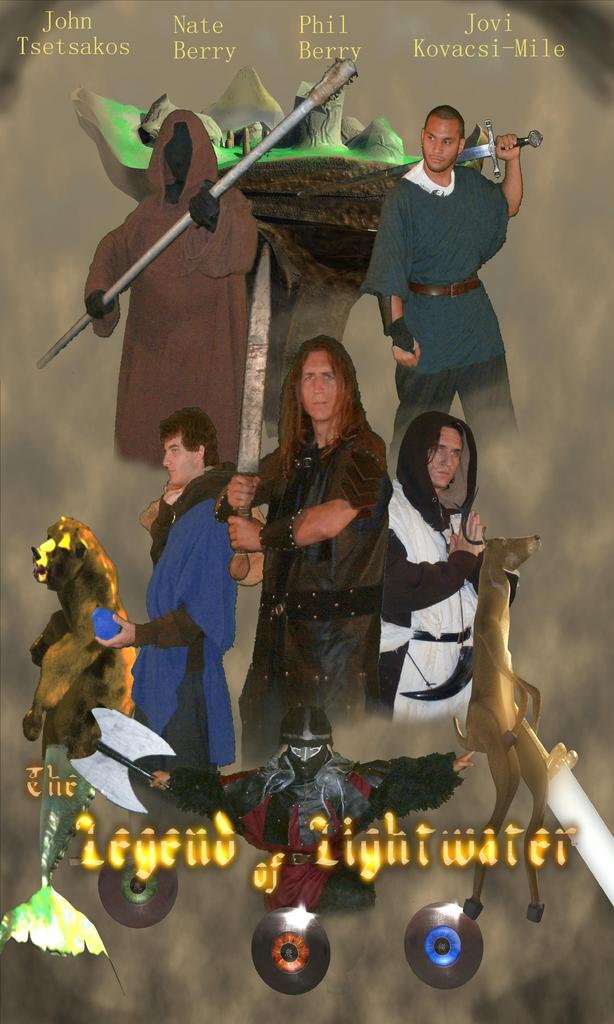 I don’t know … it’s not doing it for me. Something does seem off, yet I can’t put my finger to it. How should I put this - it feels dull, atleast for me. Maybe make it more dynamic?

Dynamic, meaning show some sort of action or scene pertaining to the plot. I’ve no experience at all in film making so I can’t help you as well as, say, someone who knows these things better than me.

I hate to say it, but since you ask…it looks a bit like a “B” movie poster. It doesn’t look like a professional poster.

I don’t know anything about this movie, but I like the poster: 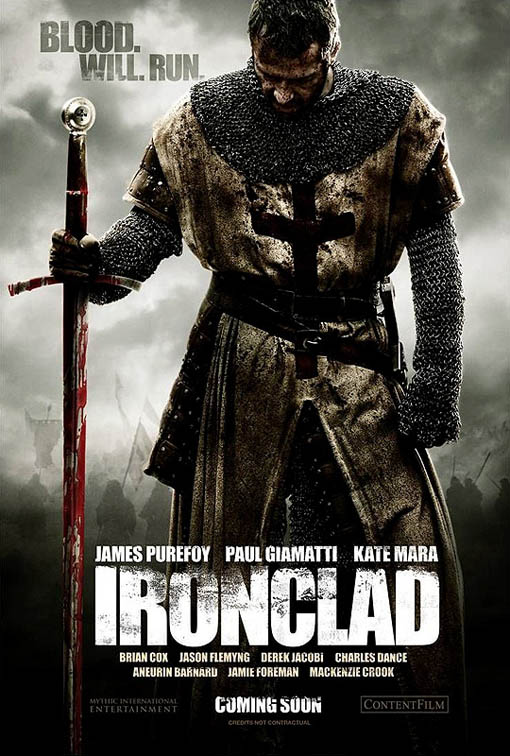 I have to agree with the other two posters, the image is lacking. The background texture isn’t very detailed and is missing intrigue. If it was my project, I would experiment with simple gradients and add several layers and blending modes on top accompanied by interesting brushes. I don’t know what program you used but I myself use photoshop and find www.myphotoshopbrushes.com very useful.

its definitly the contrast and eyecatchyness of it… i spent a few minutes with the image in gimp, just adding some glow and adjusting curves and this it what i got:

in my opinion, contrast is what makes or breaks a picture… and the focal point. if there is no variation of brightness around the edges compared to the middle, then the viewer doesnt know where to look. so i also added a feint black sort of edge… also, i think the font (especially the layout of it) is too much like lord of the rings, plus its way too small. the unwritten law of posters is that it must catch the attention of any bypasser…

havent had a chance to watch the trailer yet, but good luck! going to follow this thread, let me know if you need any help regarding the poster, but i cant promise anything since im busy with my short film (http://blenderartists.org/forum/showthread.php?t=192653)

I also find the creatures distracting and frankly I’m confused as to what they even are.

agreed, it would be better with fewer characters… like he said, taken in an environment significant to the story… or atleast similar… then play around with gradients, focal blur, curves and saturation - for saturation i suggest that its in between black and white and as it is now, since that will give it the old medieval feel.
detail is also nice, for example, you could have a close up of the protagonists face in high res and quality

Two words (and this probably applies to your edit as well as your promo material):

Darth Vader has his fingers in the deer’s ass.

I can’t really tell what it is, but you can tell that the people’s photos were taken with a home camera.

Btw: cire792’s comment is a WIN I laughed so hard.

^^ Verbatim. I doubt the film’s a comedy though.

@cire792 very funny! I didn’t even think about that. But thankyou for correctly referring to the deer as a deer instead of a reindeer, seriously your one of about 2 people that didn’t call him a reindeer.

Just wanted to say to everyone thanks a ton for providing SOO much feedback on my poster. This is exactly what I needed. I was trying to replicate the style movie poster they did for Lord of the Rings.

Some of you commented that there were too many characters on the poster, however, I think to replicate Lord of the Ring’s style poster, I needed more characters. Just also as gregzaal said: more contrast to draw the attention to the main character.

The Bearfish (called a Salmon Bear) and the Deer. Are important characters in the movie even though they both only make small appearances. I figured any movie with CG characters would look enticing to me so I put them on the poster.

I’ve considered all the suggestions given and at first I was thinking that it would be best just to redo the poster completely with a shot of the main character against an environment significant to the film’s plot. But I just can’t come up with a good enough image in my head. Every picture I imagine looks too bland to be used for a movie poster. And also this poster is more for the actors than for marketing purposes (the movie will be on youtube for free) so I want to leave it the same style as it is currently for some of the actors sake because I know they would want to see themselves on it.

Here’s what I will change.
-More contrast, especially around the edges to draw attention to the center.
-New Font for titles and names.
-better masking.
-more glow.
-fix background texture.
-change placement of demon’s hand and deer’s ass. (actually some people might get a kick out of that).

I also want to know your new opinion about the two CG characters now that you know more about them and why I put them there. What were you thinking when you first saw them on the poster? I’d compare them to the black riders on the Lord of the Rings poster. They’re something different and it makes you wonder “what are they, why are they there” and makes you want to see the movie more. That’s just my opinion but I’m not an experienced movie poster creator, so let me know what your second opinion about them is.

Thanks again for the great feedback!

I would also suggest changing the position of the eyeballs. It doesn’t make sense for them to not all be in a line.

ok tell me what you think: 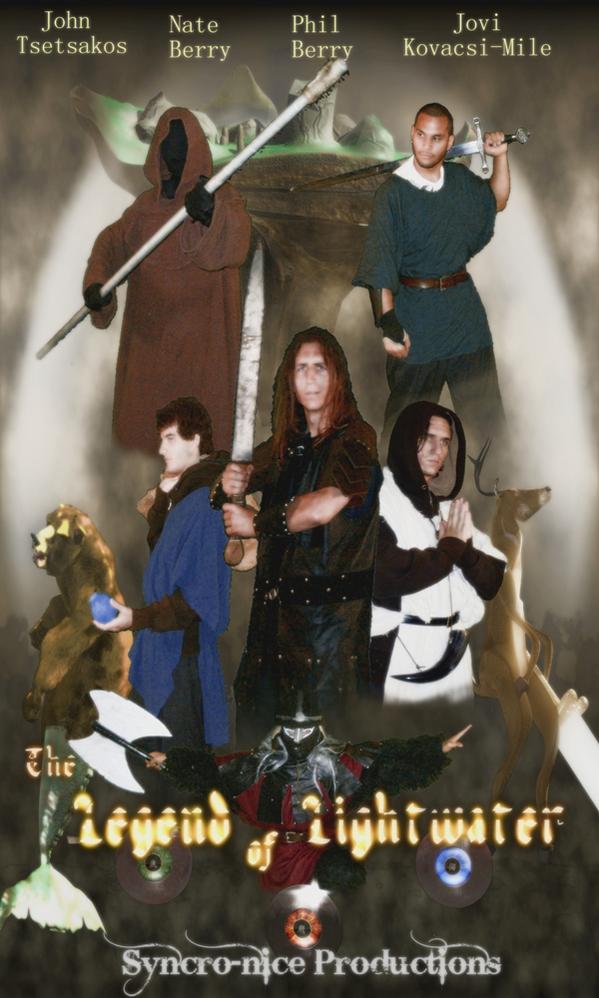 You should feather the edge of the characters when your masking them, so its not such a sharp pixely corner.
Make a center line, and arrange the names to fit that.
I’d switch the wizard, brown robe, with the guy on the right, sword over shoulder.
Since his staff is pointing that way, and the sword is pointing to the left.
The picture of the blue robe is blurry, out of focus. I suggest taking another one.
But if your gonna do that it may as well be of them all in a group?
Why don’t you try scaling up that render of the town you have, and bringing it down to where the good guys are.
Also is the deer an anthro? (stands on two legs) cause it just looks odd with his stance.
Is that a final render of the mer bear? It’s poorly coloured.
Idk if it’s to late in production to work on it more, but how about trying to paint over iti for the poster?
I also think it’d be best to unify the font throughout the image.
And remove the harsh glow from thetitle, its just hard to read like that.

as you see in the lord of the rings poster, the protagoinist (frodo) is huge, yet there are still lots of characters. play with scale, the most important characters being the biggest… and yet new photos with better lighting and a green screen or some similar concept if you dnt want to use an actual image background like most posters

here is another try. When I get more time I will blur the edges of the characters and maybe change the arrangement of the two CG characters, like making them face each other and silhouettes in the background or something showing conflict. 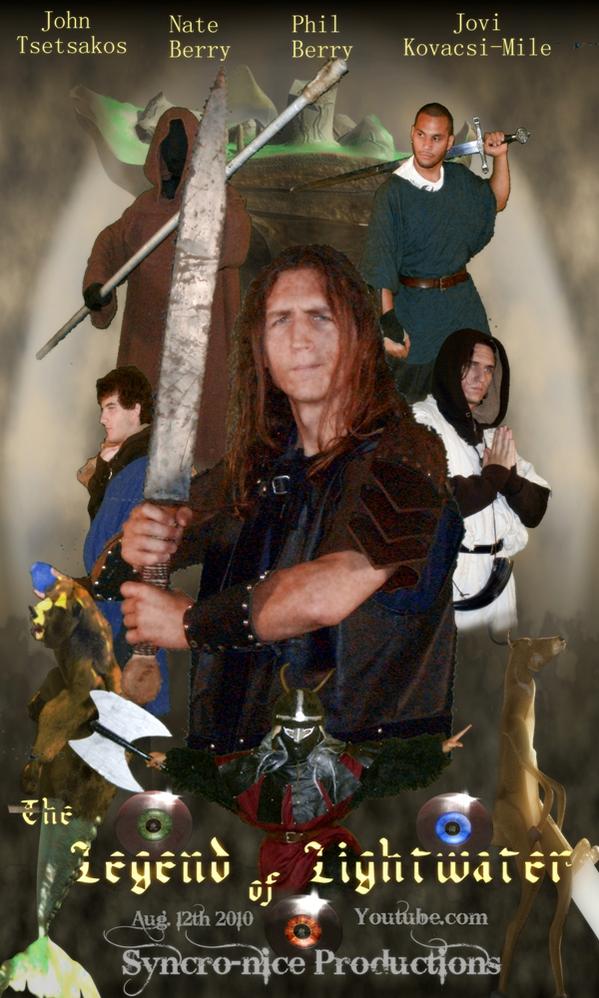 is there any chance you could get higher resolution images of these people posing?

On any film poster you will ever do in this life , remember that one the poster there are only place for the principal actors the ones that are the story based. Usualy they are only 3 or max 4.
Check all the movie posters you will see that there it is only the main actor , his girl , or the 3 main actors , and so on.
Think about Pirates of Caraibes and there you have the main character in Jhony Deep , then you have the two lovers > 3 in number …the rule it is on all posters same.

@ zeffii I have a much higher resolution image of the whole poster but I can’t upload it here due to the resolution restrictions. The resolution I have actually is 3000x5000. The camera I used to take the photos with captured the actors in 2560x1712. And yeah as somebody commented earlier, it was just a cheap digital camera. The main character in the center was scaled up a lot to fit the large dimension of 3000x5000.

I don’t really like the quality of that camera at all but I had no other camera to use. I didn’t mention above, but this is a very low budget movie. The movie it’s self was shot on an old mini dv camcorder with a broken LCD. All our costumes and weapons were either donated to us or home made, we didn’t hire actors, we just had our friends play roles, locations didn’t charge us, and I did all the visual effects myself.

I had some money to spend, but I really wanted to show people how cheap you can be and still come out with something decent even if your trying to film a medieval movie requiring elaborate sets and costumes.

I’ll have a better poster posted by wednesday when I have more time to work on it.

i guess its better, but it would help more if you scaled the 2 guys in the background down by, say, 0.7? just play around…