So here is my start at a medusa bust, just going to do the head, neck and shoulders.
In this photo I have the snakes attached to the head but only as a test, I actually think I will add more snakes to the area in the back of the head. But will keep the snake and head models seperate until the mouth and back of the head are finished.

So here is my plan:
update #1 insided of mouth modeled, textured, and attached to head.
update #2 snake textured (I have it unwraped but no uv texture yet)
update #3 back of head modeled, along with neck and shoulders.
update #4 texture head
update #5 attach snakes to the head, and texture attachment areas.
*then mabey do a small scene and background and move it to finished section…I hope

I think the ears may be a little off, they seem to be connected strange, and are too high on the head. But hey, its better than what I can do probably.

MusicMan- thanks for the post, at this time it is not really attached to the head, the side is actually not even modeled yet, and might have to make a new ear altogther. but i will keep your advice in mind when attaching.

Update #1
So got the mouth modeled and textured and attached to the head. and also put in some tempoary eyes, onto the snake next.

Its looking great so far:D

Not to knock your abilities, but wasn’t medusa turned into a snakey
hair monster because she beat some goddess in a beauty contest??

Althiom, the picker of nits

thanks for the posts

MusicMan- almost forgot to say that marshmellow story is hilarious, sounds like something i would do, very funny stuff

Ataryu- hey thanks for the very nice comments, i enjoy your work too so this is very nice to hear

Prince- actally i ment weezy from the jeffersons, thanks for the correction, that brings up a funny story about a dream i had. all the dream consited of was me sleeping, with no images then a thought came into my brain, and this was the thought “they should have a channel that shows nothing but the jeffersons” and then i woke up, man i love that show.

althiom- got me man, i just wanted to make a chick with snakes for hair, actally i was inspired by the medusa in the film Clash of the Tiatans, I loved this movie as a kid, and that stop motion animation scene with her really captured me as a kid, and recently felt like the right thing to try next. but you also bring up another good point, i mostly have only done male faces, and this particular one I wanted to make very pretty, but i know i only had small sucess in female type features but i felt i got some what of what I wanted

Thanks for the posts, working on snake texture, will be up soon, thanks

Update #2
finished textureing the snake. wanted a little more color to show, but over all it turned out pretty good. next going to finish the head model, and add arms, and attach ears.

Wow, those snakes look fierce! Are the eyes seperate and movable, or are they just textured on?

I think in general the snake’s body might be a little too flat. You might consider rounding that out.

thanks for the posts guys

Jay Eff- thanks for the nice post, i was afraid they would look dull, also the eyes are seperate and movable.

MusicMan- thanks for the post, i totally agree, i was seeing it to but was trying to put it off, but i will fix it for the final rendered model, thanks

here is just a small test of the two sections attached.

been awhile scince last post, but going to stay after this model until complete.

Update #3
So reworked the ears, i think the first set i made was best but they would be impossible to attach to the head mesh, so i redid them completely. also did some major changes to the face, eyes, mouth placement moved up, reworked nose also. The mouth is still a little off but going to put some more work on it. and added the neck some shoulders and some breasts, but still some more small adjustments to the shoulders.
overall pretty happy with the work. too bad i only really get weekends to put serious time into these models.

So back with another update within a week or so with the face texture, going to be a pain but i think will turn out quite decent.

Well if you are trying to get the ears to be relistic in shape, then they still need alot of work. And the neck area seems to be very squarish.
Here’s a good ref for the ear. 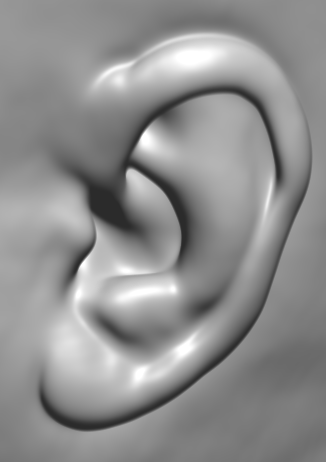 mr_bomb- thanks for the photo reference. due to time i dont know how detailed I will be able to get with the ears. i may try to use an angle in the final render that will not show them as much. however i agree with the neck problems and went back and made it a bit longer. also may have been angles of original photos that made it look short.

this will proably be my final model due to time and my lazyness :o , want to move on to more things, already got too many ideas in mind. so here she is reworked the face a little, and reworked the neck and ears.