This is one of the possible menus I want to use in one of my projects. Please place critique and comments Looks good. I have a slow connection though, so for just a menu would have thought you’d have made the file a lot smaller. I’m assuming you’re going to have the clouds drifting across the scene? Otherwise, it might be a smaller download if you don’t have geometry surrounds and instead have the backdrop as a prerendered image on a flat plane… you’d have to experiment because sometimes images are smaller filesize, other times geometry is best.

looks nice it remends me of wind waker game

My thoughts are, that for a 3D scene, its very static.
Perhaps give the camera some subtle sway, as if in the wind, or person breathing … just something for a bit more life.
Same with the clouds, they should definitely do a slow scroll across the scene.
The IPO for the unscrolling sharply cuts off right at frame 13 giving an unnatural feeling. If you could taper that off, you’d make the scroll much more tangible and believable.
And it would be cool if the text was on the scroll itself.

I agree with what’s been said so far.

It might look nice to have a touch of mist.
I think it would look nicer if the sky gradient was reversed (got lighter at the bottom).
The clouds should be a bit higher res… or maybe just softer alpha instead of the clip alpha.

Also, it could probably use a lot less memory.
The scroll texture is higher res than it needs to be.
The text and clouds might take less memory if they were png instead of tga.
The terrain could be a lot lower res and have a subsurf modifier.

Thank you for the responses

I was definitely planing on making the clouds move, just haven’t gotten around to it yet
The terrain works as a test, it is way too high poly but I’ll figure something out
As for the text being written on the scroll I don’t know how to do (suggestions are welcome :D)

I’ve updated the menu a bit

The desert is now a render on a plane
New cloud

This should run much faster than the first one 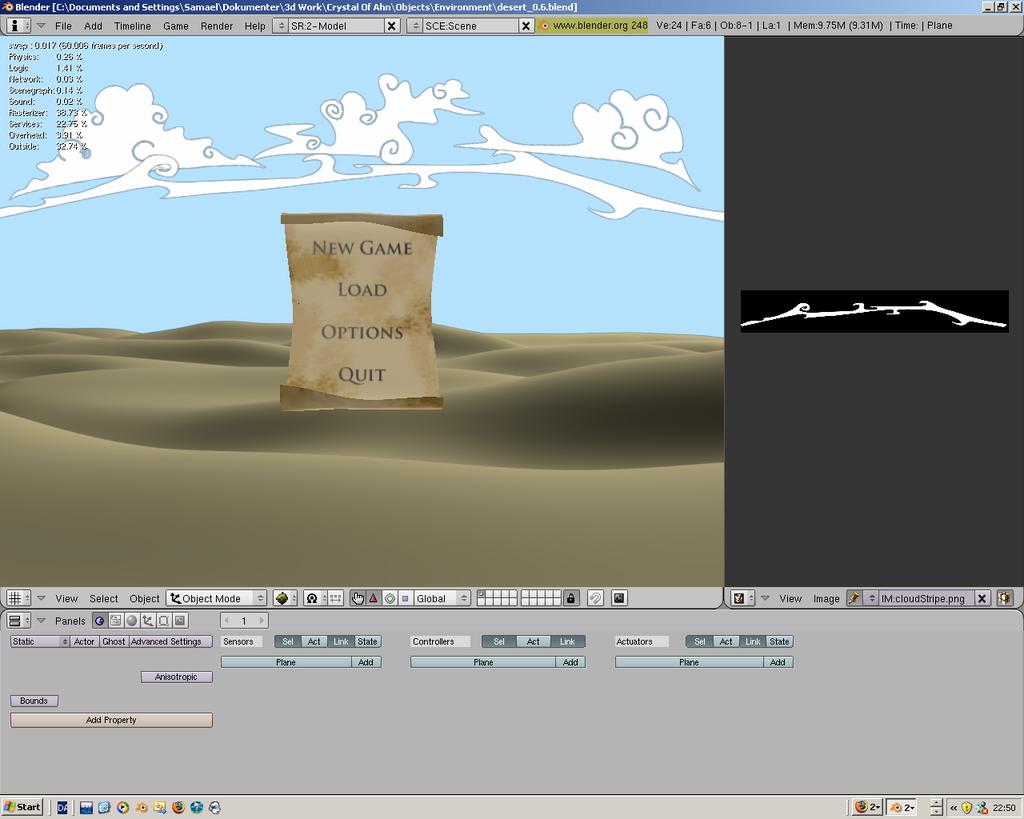 you should make the menu 3d, and just make a desert all the way around, and have the camera turning slowly, to show it’s in the middle of nowhere.

If I make the menu 3d the file size will go right up but if I could do it only with renders it would work perfectly. I tried rendering all the way around but I can’t get it to fit, any suggestions?