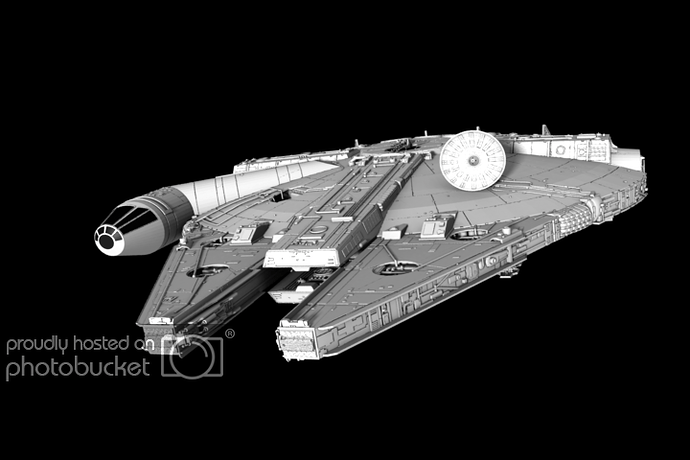 Another one with textures fixed, had to reload and re-UV the textures:

After some consideration of rendering time and limited 1 license for 2 cores, switching to Blender Internal:

falcon002bl.jpg720×480
Render with one Sunlight with Ambient Occlusion enabled, still not as good as 3DELIGHT.

Here is one with same as above but with HDRI added, I think it looks allot better:

and Finally a completed scene for now, need some C&C: 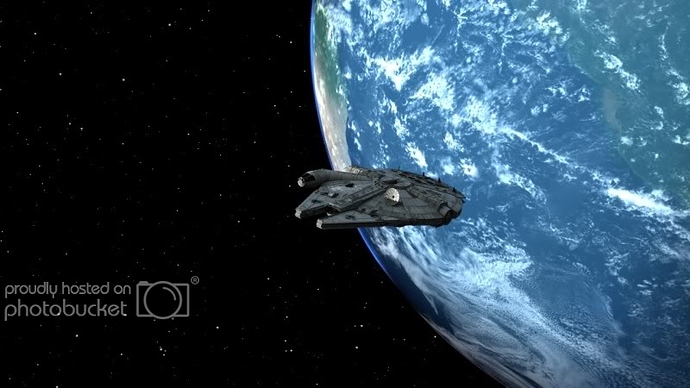 falcon008bl.jpg800×450 123 KB
Scene consists a star field in the world button; earth consists 3 different spheres and maps and modeled by me using blender. And allot of experimenting with lighting. Total days for all, took about 4 days; 6 hours a day. I think lighting was the hardest, I wanted the Falcon to look realistic. Render time above was about 20 minutes at that resolution.
No Nodes were used at all. I prefer to make it node-less. I am considering do an animation in the future.

that is cool! it always was my favorite ship…

Nice. How big of a res did you use for the earth? And how did you do your starry sky? Lighting is hard for me

Random suggestion. Maybe add some space dust or something for a dirty/mysterious scenario look?

You should try rendering in 2.5 it might render lots faster. I had a 2.49 file taking me about 4 minutes take about 30 some seconds in 2.5

You could save lots of time by baking on the ambient occusion since its space and the lighting wont change that much.

Where do I find a .blend file for the millenium falcon? (and is there a free one?) or one for trade of something else I have maybe?

I might be impressed if you had modeled the Millennium Falcon, but I guess you downloaded it, so… um, whatever.