I made this little render for fun to come into the blender spirit again, after a year of not using it. I made this little Minecraft thing, as I’m into that game right now. This is still rendered with the old-school Blender rendering, but I’ll make one with cycles as soon as possible. Hopefully also with a lens flare. 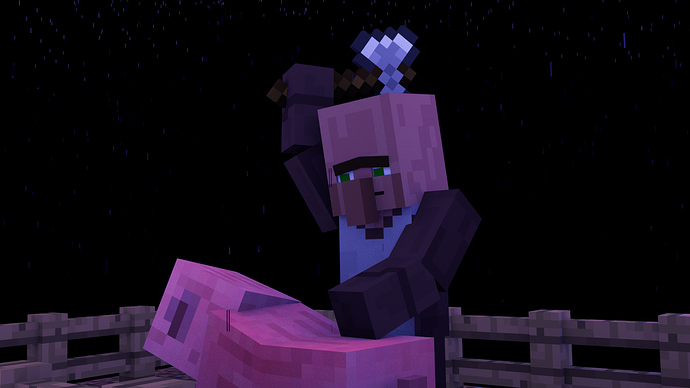 At the moment I’m also working at realistic/non-minecraft stuff, because I’d like to make things with more details and realism in them.

Please give your feedback, and mayby suggest for some future stuff for me to make.

Hi Lucoshi! You’ve done a pretty good job on this so far! I like the composition and the pose. I’m glad to see that you gave the shot good exposure even though it’s a night scene. So many people will make a shot dreadfully underexposed simply because it’s at night.
If I had any suggestions, it would be to try to make the lighting a little more pronounced; it looks a little flat at the moment. Basically I mean just try to have a little more contrast between light and shadow areas. But, then again that’s just my personal taste.

Besides that, I’m am just a little unsure of what the title bad job butcher is referring to. Is he doing a poor job of butchering, or is it simply a job he doesn’t enjoy? Or perhaps something else entirely? If you wish, you could reverse the pig a little. I sense that the testificate doesn’t want to hurt the pig, but with the pig’s face not shown, we can’t connect with the pig on a personal level. Maybe you want that. But, if you really want to drive home the sad feeling, you could turn the pig 180 so that we can see it’s face and feel sorrowful for it (just as long as you don’t give it a big, happy grin.)

I know that might mean more texturing work for you, though, so it’s your call. Either way, this is good work so far!