As you know, Mitsuba is a old renderer. And a declining one. Since I’m doing a Grand Tour of all renderers (I’m done with Lux, Indigo, BI, and Cycles) I decided to dig up Mitsuba. The results are definitely not disappointing. :ba: 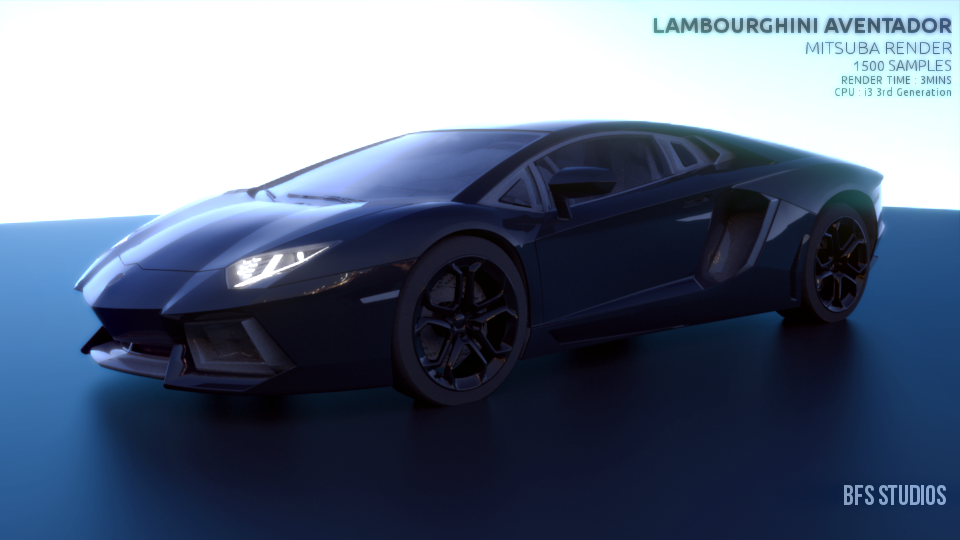 I’ll be using downloaded blends and models, my main objective here is to bring about the ‘feel’ of rendering in Mitsuba.

Mods, I have a queasy feeling this is the wrong place to post…Please correct me.

Old and declining renderer? What did you smoke

Weed. Loads of it.

The force is with this one

Neat, certainly it compete other renderings.

Yeah, the bad side of Mitsuba is
a) It doesnt have GPU Rendering
b) Lack of textures ----

@MarcoG, it is declining, compared to Cycle’s stellar rate of improvement. Can’t say no to that, can you? Mitsuba don’t even have a noise texture, i had to make one in GIMP, export it and use it as a bitmap texture to influence the specular value of the car. I had to use physical displacement too.

And, the last most annoying thing…NO NODES INTEGRATION.

From the main site :
" Mitsuba is a research-oriented rendering system in the style of PBRT, from which it derives much inspiration. It is written in portable C++, implements unbiased as well as biased techniques, and contains heavy optimizations targeted towards current CPU architectures. Mitsuba is extremely modular: it consists of a small set of core libraries and over 100 different plugins that implement functionality ranging from materials and light sources to complete rendering algorithms.

In comparison to other open source renderers, Mitsuba places a strong emphasis on experimental rendering techniques, such as path-based formulations of Metropolis Light Transport and volumetric modeling approaches. Thus, it may be of genuine interest to those who would like to experiment with such techniques that haven’t yet found their way into mainstream renderers, and it also provides a solid foundation for research in this domain.
The renderer currently runs on Linux, MacOS X and Microsoft Windows and makes use of SSE2 optimizations on x86 and x86_64 platforms. So far, its main use has been as a testbed for algorithm development in computer graphics, but there are many other interesting applications.
Mitsuba comes with a command-line interface as well as a graphical frontend to interactively explore scenes. While navigating, a rough preview is shown that becomes increasingly accurate as soon as all movements are stopped. Once a viewpoint has been chosen, a wide range of rendering techniques can be used to generate images, and their parameters can be tuned from within the program. "

Of course it doesn’t have the production features of Cycles !

Declining means “is gonna die/disappear”, instead it is growing pretty fast, so i can’t see nothing declining in a single-preson developed engine with such amount of features and integrators.

Your ironic statements are annoying man, if you can’t understand Mitsuba is a research engine and not a production software it’s your fault. Also, there are lot of unfinished engines around but with a good UI, this renderer might have not the most simple UI yet but has some feature such as sss and volumetric which not everyone has.

Chill. I have no quarrel with you. You’ve got into featured quite a few times, you have excellent repo. Sorry for anything that may have seemed offensive to you from us mortals.

a) OK, it is not decilining.
b) I understand it’s not a production soft. o_O
c) Mitsuba has a good UI.
d) Yes, I agree with your point about SSS and volumetrics.

Then I prolly misunderstood your attitude, i read 'em more rude than ironic and since i admire Mitsuba and its author i felt disappointed. My comments also might sound harsher than intended. Keep doing Lamborghini, but change the Lambourghini mispelling!

Blender Tests mighta been a better category for this. I always like to see Mitsuba renders for whatever reason, by the way, so keep 'em coming.

This one led me check a renderer I was not aware of Mitsuba. Good promotion

Nice work.
I have known that a rendering engine called Mitsuba exists, but I have never tried it…
But seeing this and “render time 3mins” I think I need give it a go!