Hey all, just signed up!

I’ve been using Blender for two days now but I used to use it years ago, though I never got the hang of it. My issue with it currently is when I’m modeling from the “Edit” mode, dragging lines and such, for some strange reason the lines keep going out of bounds. I have no idea how to resolve this issue but it seems to be the only thing holding me back. I usually do models with two perspective points so that’s how I found out. To clarify what I mean with an image: http://gyazo.com/121d5824d8fa7e2df7ee8d405e677c0c

As you see from the image above, the second perspective captures the line piercing through the reference image. It also happens when I move it downward. I’m at loss as what to do, any idea’s?

Use the orthographic rather than perspective view

Idk if that made sense or if that’s what you’re asking, but there ya go.

Idk if that made sense or if that’s what you’re asking, but there ya go.

Yeah that makes sense, thank you for your help! It turns out when I was moving the lines in the freemode kind of way, the axis wasn’t locked and that’s what made it go crazy. Once again, I appreciate your help!

thank you very much.

Use the orthographic rather than perspective view

I’ve learned the hard way to use Orthographic view rather than the perspective view, it does help immensely!

Also I know I said the above poster has helped me, although now I don’t know if this is going to be a permanent fix. While locking the axis works great, the lines gradually fall more backwards than the other lines. I’m worried that in future this is going to be a problem if I haven’t found a fix, although when I extrude the whole piece it doesn’t seem to be suffering any abnormalties so I guess everything is good for now? I’m not sure.

Maybe the problem comes from not being used to working in 3 dimensions, thinking what you model as a 3-dimensional form. If that is the case, maybe a little exercise with a coffee cup (because what you’re modeling is too complex of an example): 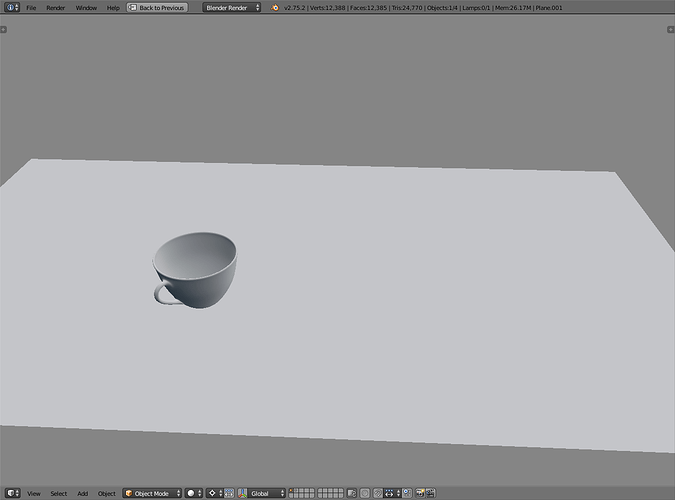 Put a coffee cup or a mug on the table in front of you so that you see the handle and some of the side. The question is how would one control vertex positions in 3-dimensions so that it’s possible to make a model of it.

The most straightforward way is to align the model with world axes but the cup doesn’t seem to be aligned with anything when looking it like that. Would have to decide how to orientate the model so it’s easy to work with. Could for example decide that the table is our XY plane and then the cup would need to be rotated 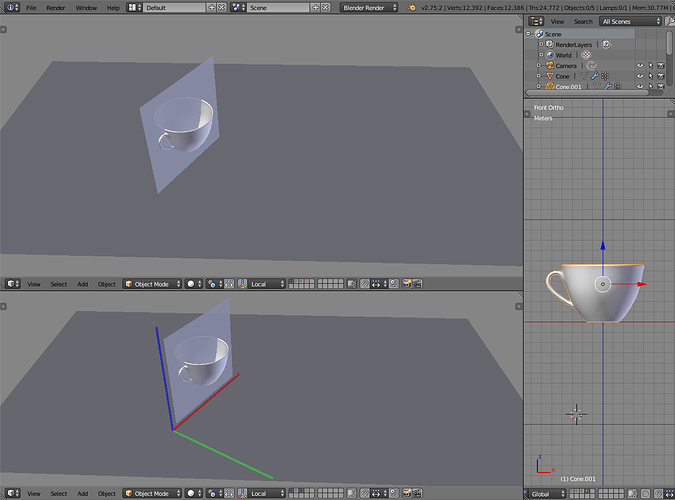 Many models have symmetry so could look for that, and then align one of the axes with the symmetry. In the screenshot I’ve decided I want to see the side with the handle dead on when looking the model at the front view. If the model doesn’t have overall or localized symmetry, then just have to pick a characteristic that could be aligned (long side, flat side, etc).

In this case the coffee cup has symmetry, so I would instantly know to use the Y axis for mirror modifier if I need that at any point. 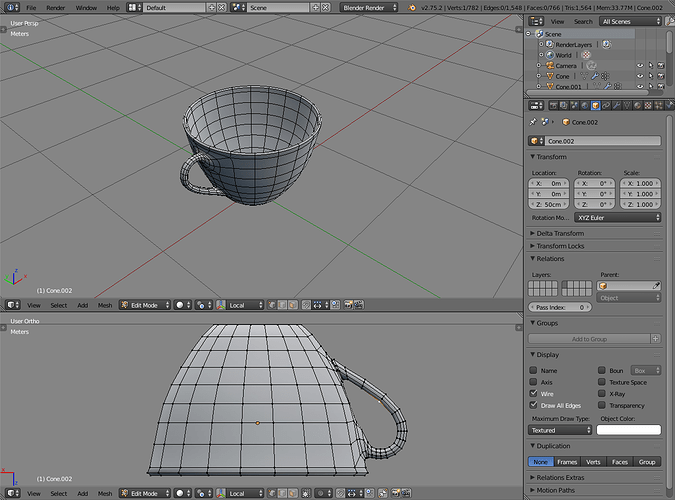 From there on I know what axis to use when manipulating vertices on any angle and any view. The specific views (front, right, top, and the opposites of those) just allow to have more precise way of comparing the position in relation to the rest of the model when moving, but it doesn’t affect my ability to know which way I have to move vertices. Could roll the view and have the cup upside down and it would still be clear which axis/axes to use when moving things around.

The reason global axes are more straightforward is because the manipulators and hotkeys give the global axes by default and the specific views also align to those. There are other axes that could be used though. For example if you modeled the object using global axes and then moved and rotated the object to its final position, the object’s local axes are still aligned. The situation would be like in the second screenshot where the table could be in alignment with world axes but the cup is not, but the cup still has its mesh aligned with the local axes.

So if you have to make a change after you’ve rotated the model, that doesn’t mean you have to align it with the global axes, just have to switch using local axes and everything is in order in the world of polygonal modeling again.