I’m new to blender and 3D modeling in general. I’ve gone through a lot of the Blender Cookie tutorials and have learned a lot. My main use for Blender will be to make 3D models & sculpts that will be printed and turned into pewter or resin miniatures and models. What I’m trying to do is create a realistic wood grain texture that’s NOT an image stuck onto an object, but actually part of the mesh, so that when it’s printed you will be able to see and feel the wood grain. I’m going for an old and cracked wood plank kind of look, like a hunk of wood ripped off an old barn. At first I thought I could do this with bump maps, but that doesn’t seem to do what I want… it will render with the effect I want, but the mesh still looks plain. So I don’t think that’s going to work for me.

I’d also like to be able to do the same thing with brick or cinderblock patterns, so I was hoping there was some kind of automatic method instead of having to sculpt all of those little details by hand.

Is there a way to do a bump map kind of thing where I can import a texture, but have it effect the actual mesh so you will see all of the detail when I get the piece printed? Or would I have to just use the sculpting tools and just draw the grain onto the object freehand-like?

Is there a way to do a bump map kind of thing where I can import a texture, but have it effect the actual mesh so you will see all of the detail when I get the piece printed?
Displace modifier http://wiki.blender.org/index.php/Doc:2.6/Manual/Modifiers/Deform/Displace 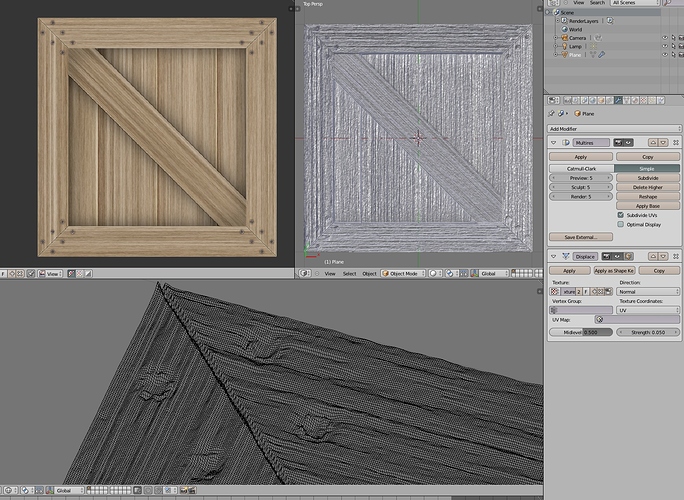 Thanks! I’ll have to play around with it, looks like just what I need

So, I was playing with the displace modifier and I must be missing something. I started with a cube, I selected 1 face and subdivided it into a bunch of teeny squares. then I applied my texture image… it worked, but not properly. I have a horizontal oriented wood grain image that’s just white with black grain lines drawn in. it looked like it tried to apply the texture vertically instead of horizontally. I guess I could spin the cube 90 degrees to fix it… but it was also acting like the texture was zoomed way in, only 1 or 2 lines of detail were on the object, not 20.

Is there an easy way to tell blender to “use this image file, and stretch it to fit this whole face or group of faces” ? … like if I were to select all of the faces on 1 side of the cube, so just those will get the texture but the other 5 sides will still be perfectly flat?

What I’m trying to put together is something like a lego block, only 1 side of the block will be textured with the brick or wood pattern, and the rest will all be flat so they can get stacked next to each other perfectly

You can also use normal maps, just learn how to use baking. or under texture, go to influence, and check normals

Thanks, I got it working now for the most part. For some reason, it goes crazy if I add it to a cube, but if I add it to a plane it works fine. So I’ll just do that and extrude it to make my blocks

Also I had my strength set to 1, and I couldn’t see the woodgrain at all, it looked like a bunch of needles. I set it down to .01 and then it looked good

Oh, 1 other thing. So, if I’m adding a texture, do I want it to be a really high res image, like 300dpi? it seems like in my wood grain image, some of the longer grains look nice and smooth, but I also have a rounded knot area, and that part gets kind of blocky looking, even though it looks smooth in the image. Do I just need to subdivide it even more? I already have it pretty high, there’s like 100,000+ vertices in my little plank of wood.

Can you use vector images for smoother results? I tried, but it wouldn’t let me import a .ai or .eps file.

One of the sculpting videos I was watching, the guy said you can just use a low strength inflate brush to get lots of new vertices on the mesh, would that be a better way to go than just doing a bunch of subdivides in edit mode? Like would the triangle shapes give me better results than squares?

do I want it to be a really high res image, like 300dpi?
dpi is irrelevant, number of actual pixels is used.

Can you use vector images for smoother results? I tried, but it wouldn’t let me import a .ai or .eps file.
Needs to be a raster image. Compressed images like .jpg will give visual artifacting in the displacement and low bit depth images may show stair stepping. Ideally for best displacements use 32bit images

doing a bunch of subdivides in edit mode?
Use subdivisions with the multires modifier in combination with the displace, basically its the same as doing your normal sculpting. You can apply the displacement modifier at any time to bake into your sculpt.