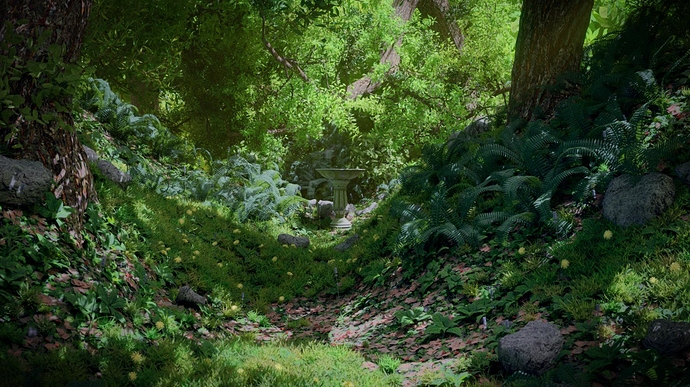 Hey guys, this is a scene I created trying to achieve photorealism, but it is far from realistic. However, I am learning blender and created this project to learn more about modelling things and all. I created everything here, except the textures. All hand-modelled.

So, it would be very nice to see some quality feedback from you people.

I did some post-processing and I have yet to add some DOF. I might add more nature things in it like more weed, etc. 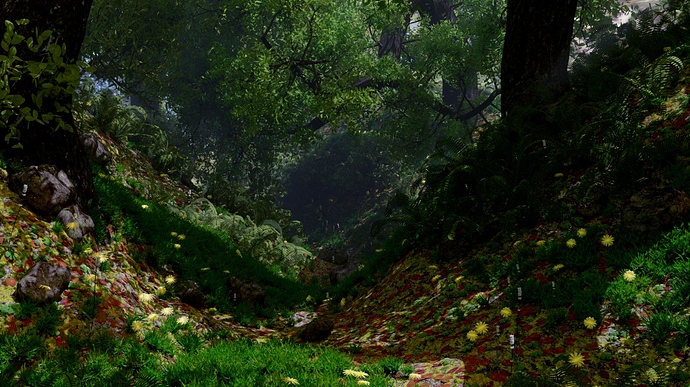 I don’t think you can ever achieve true photo-realism with such a fantasy reliant image. What you have is pretty close though.
I would say to change the floor entirely, the flowers on it feel very very flat.
If you want to go photo-realistic, you’ll need to learn how to post-process your image. Learning to do so properly is the difference between night and day, but you’ll need a good program for it. My go to is Photoshop as well as Gimp 2, but there are a bunch of other software available.
Here’s a fantastic tutorial by Gleb Alexandrov on how to post-process, I highly suggest watching it.

The leaves from the tree in the top middle shows a perfect shader. But things closer to the camera looks to saturated and to much contrast.
I usually don’t put more saturation than 0.5. But the scene is great. I like it that the back is a more washed out than the front.

I don’t want to change the floor

I wanted to go for three tiny hills criss-crossing each other, kinda-like. But the flowers really feel flat. I will make the changes to make it look more like a real flower. But just curious, you want me to change the topography(?) or the texture of the floor?

You are right about PP. I am just too week in PP. I will watch the video you provided. Thanks for the feedback

Thanks, I think this is the first time I got the shader right

Yeah, I realised that things really look saturated in the front, especially the red leaves. I toned down the saturation.

Thank you both for the feedback.

Here is the update:

First, I lowered the saturation for the dead red leaves, grass, dandelions, weed, stone, and ferns. Added Glow in PP. 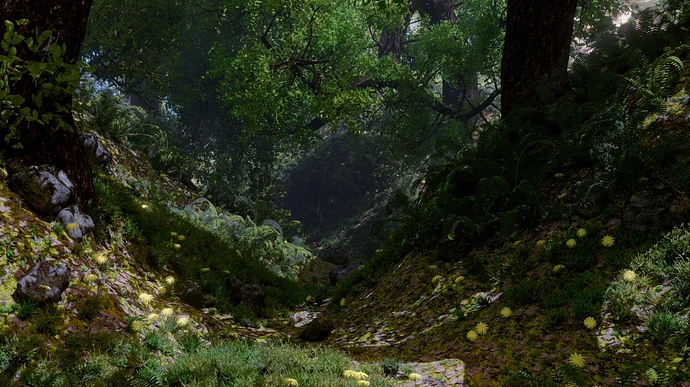 But I think I desaturated the grass too much, so I made it more green. Added DOF. Made the flowers more round. 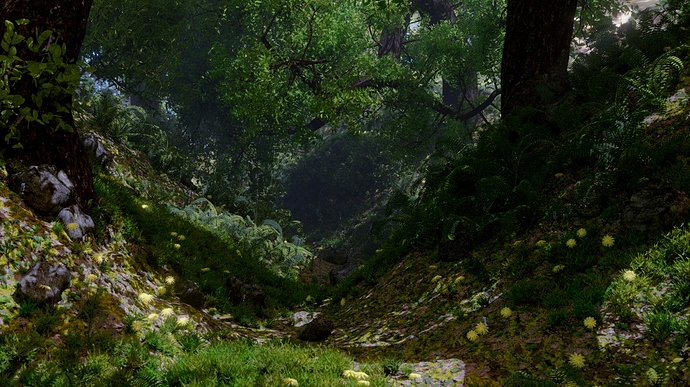 If everything seems fine, I will give it a render with more samples.

It’s a good picture, but you can do much improvement rather easily.

Hope these points will help you a bit :). For all references to look at just search “forest with leaves” on google and you will get a lot of pictures that visualizes my points above.

Thanks for the feedback Magicglow. But some thing I don’t understand bout what you said:

I don’t get this. Are you talking about the leaves on the trees or on the ground or both? I should concentrate leaves more on the path-like area than on the side? Will do that.

I was afraid someone will point this out :D. Because I didn’t even think about the story element at all. But I will add a broken log near the camera.

Actually, I wanted to create a forest with not everything visible. I tried cranking up the sun and it made the dark area more visible. But I am not going for that effect. I wanted to create an illusion that there are some big heavy trees that are causing some really dark shadows. LIke this: https://w-dog.net/wallpaper/nature-river-water-forest-park-trees-leaves-colorful-autumn-fall-colors-walk-leaves-autumn-nature-tree-forest-park-mountain-sky-river-water/id/307919/

I will add vignette. That’s something this pic is missing.

I had added 3 sun lamps and an HDRI. I will crank up the level of the hdri without making the shadows duller. Also, I have rendered the image at low sample, maybe things will be more visible when I render it with more samples.

Thanks for the feedback. I will make those changes and get back to you.

Yes, the leaves need more volume, so they do not appear to be flat. Most should be a bit bent like this: 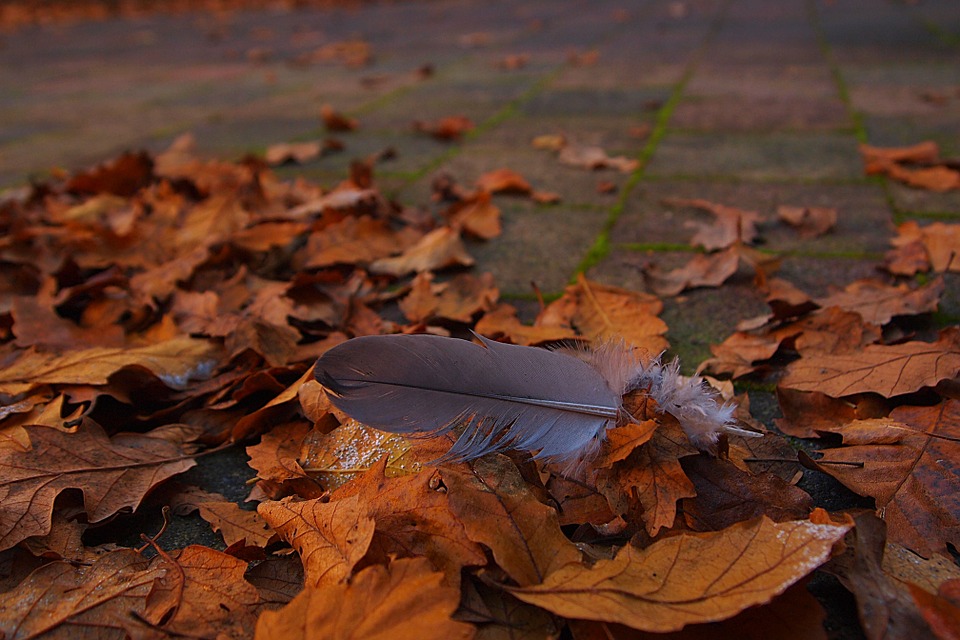 About gravity, I mean on the ground. The majority of the leaves will fall to the lowest spot… but of course not all since some will be caught by other leaves or grass before, so some more leaves where it’s really low ground.

Always listen to feedback you agree with mate.
If you find that your feedback will destroy what you had in mind, then don’t follow it. Try it out and see what happens, but if it really doesn’t sit right then…
Right now MagicGlow is teaching you how to make a visually pleasing photo.
The point of high-contrast areas is to get the viewer’s attention, as the human eye will always look at the brightest looking areas first. That’s why in visually pleasing images, the story is often in a bright area.
That said, it’s also good to have a break room in your image. So as beautiful as everything is, the picture should actually have some parts to it that are meant to not capture attention at all. This way the story sticks out, and the viewer’s eye isn’t overwhelmed.

Very good advice from the other dude, but that kind of stuff is really hard to pull off if you’re still in learning for blender.

Heh, as for contrast in your image, sometimes the 3D rendering engine just can’t properly absorb in light. (Granted there are a few sweet plugins for that, I can’t think of any so google them).
In this case, it becomes a matter of compositing your image properly -o-
I hate to bombard you with information, but watch this beautiful video by the AgenZasBrothers before they disbanded.


This video will introduce you to compositing, which is basically adding node groups to a render result. Think of it as a free, better Photoshop that can work with your 3D world.
The reason I bring it up is to solve your contrast issue. As well, because I think this video in particular will actually inspire you.
usernew (usernew) April 26, 2018, 8:03am #11

I did that. But my computer crashed when rendering two times, so my render is not finished. I added a log but took it out as I thought it was too disorienting, I thought

I will see if I can model a low poly butterfly and put it in front.

I always do. Actually, the very first thing I had in mind was to showcase that tree in the middle with the branches hanging down. I forst followed a tutorial on Forest by CGGeek on youtube and I wasn’t happy with the results. So, I decided to make a lush forest again and this is the result. I will increase the lights tomorrow and give it a render. But I don’t want the shadows to appear softer. I am going for this kind of effect, like dark areas and bright areas without godrays and sun. Here is the updated version. I made the dark area more bright. I changed the color of fog from blue to greenish-yellow, and also added vignette. Blue fog gave impression of morning to me, which was not matching with the sun rays.

I watched that video some time ago. I have tried to fix the contrast issue. Please report if something is wrong or missing.

If everything seems fine, I might wanna try to send it to Blender Guru for critic, if he accepts.

I can see the difference and I like it better than the previous ones you posted. However, and this might be my impression only, that the flowers are still a little too big.

Hey, Bakerlee. You mean the overall size of the flower with the stem? Or just the flower part?

with more samples and smaller flowers: 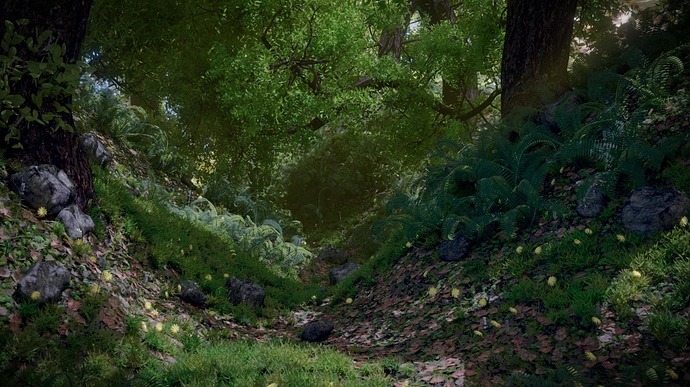 It looks much better now :). Small changes compared to the first image you posted, but a big impact of the feeling when I look at it :). The shadows look MUCH better now.
One more suggestion though… could you try to do a sample without the yellow flowers for us to compare? I have a feeling that the image would look even better without them (I know, it feels strange ta say it since they give a variation on the ground). The assumption for this is based on that you aim for photo realism and I can’t find a single picture on Google if I search “Forest with leaves” that has flowers visible in these kind of leaves. If I search “Forest with leaves and Flowers” I get some pictures with snow drops or small blue wild flowers… but most pictures is still without flowers. So… give it a try and see the difference

I agree with the above comment though not completely. I live near a mountain and we frequently take family trips to the forest there so from my experience you should remove the leaves from the areas with leaves but keep them near the centers of the grassy spots. That in my humble opinion would give for the most realistic result.

I will try and give the result tomorrow. Thanks for the feedback

Aaaaand, I will also change the color to mild blue. I will give it a try but with less samples