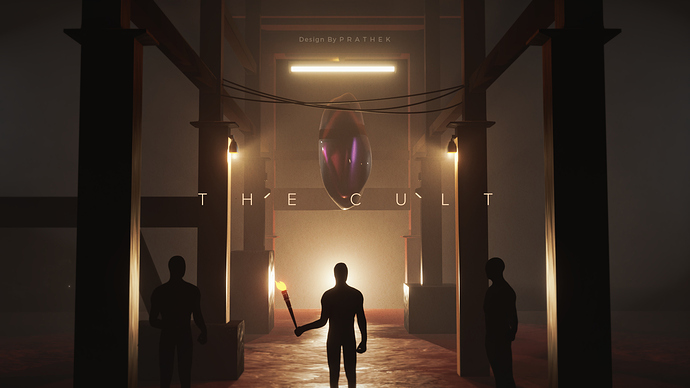 The Cult.jpg1920×1080 321 KB
Hey folks,
I’m very excited to post my first Blender Artwork, in fact, my first 3d artwork. I’ve been an Illustrator and wanted to expand my skillset. Thought I’d introduce 3D into my pipeline. A couple of days later [Jun 29, 2019] I found a video on Youtube by Daniel Bystedt (old video dated back to Dec 2017), showcasing Eevee’s capabilities. I was very impressed and decided to learn Blender. From that day on its been a constant and refreshing learning experience for me. What amuses me is Blender’s portability and speed. Illustrator and photoshop both respectively take me about 2 minutes, at the very least, to load and here Blender opens up in mere seconds. For most of you that might not be an issue. Its a boon to me.

This piece is nothing fancy. Didn’t work too much on texturing. Currently learning how each node works from the blender manual. Secondly, I worked my way around the lighting. Used 1-Point light (Front, where the central character is facing) and 2-Area lights (Left and right of the scene) and Emission (at the top) for the tube light.

For the mystery object floating in the air, I used two ico spheres one inside another. The inside ico sphere is a simple gradient texture. For the outside ico sphere, it’s funny I wanted it to look like frosted glass or something but it turned out looking like a balloon and the floating aspect doesn’t help it either.

Finally, I rendered out the image and three passes from the compositor

Thank You. Appreciate It.