My first sculpt, please tell me what you think!

I’ve been playing a lot with the ‘Speedsculpt’ add-on and this is the first big project that I finished - Also my first time doing a fancy illustrative render, as I mostly focused on animation before.

I would love to hear your critiques, especially in the aspects of lighting / composition / colour / value. 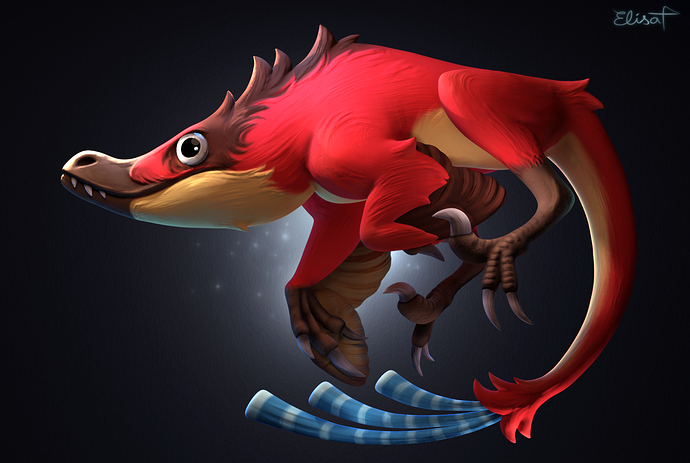 I am aware that the bump map is really bad and pixellated in some spots, I believe this is because the UV map was too small and because I unwrapped the model automatically instead of manually, and that created a million tiny separate pieces that were difficult to paint on in 3D view. Not sure if I should leave the bump mapping out entirely next time and just sculpt any details directly on the model…any advice? 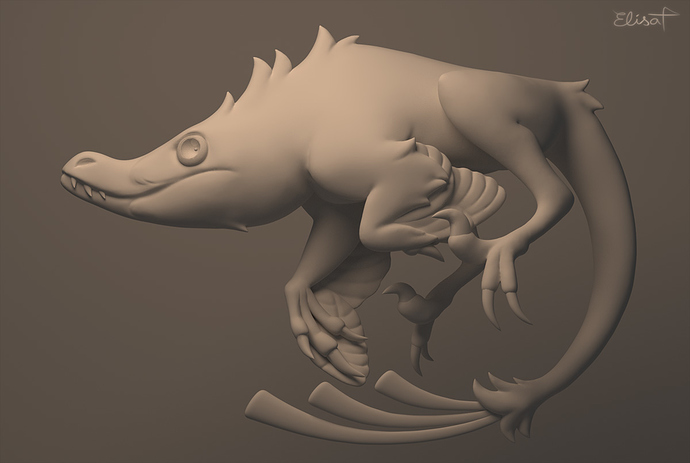 And this is the old sketch it was inspired from btw. (by me)

It looks great! My only concern is on the legs and arms, is difficult to see two legs, it seems it is only one but really extrange. The arms are also confusing, like they are completely diferent in shape and size.
I love the colors.

Thank you! Ok I see what you mean now, indeed the legs do sort of melt together. It also doesn’t help that you can’t see the thigh of the back leg, as it’s covered by the wing. And yeah the arms + wings do look completely different on each side, which might cause the confusion, especially if you’re not familiar with feathered dromaeosaurs to begin with. Maybe I should’ve positioned them in a clearer manner.

It may your first blender sculpt, but you clearly have put in plenty of art practice in general. It’s awesome! Have you played with freestyle at all. Thin black border lines can look really fun on an image like this.

maybe just some rotation to the dromaeosaurs and some light change can do the trick.

I am aware that the bump map is really bad and pixellated in some spots, I believe this is because the UV map was too small and because I unwrapped the model automatically instead of manually, and that created a million tiny separate pieces that were difficult to paint on in 3D view. Not sure if I should leave the bump mapping out entirely next time and just sculpt any details directly on the model…any advice?

Can’t tell if it’s a dynamic topology or multiresolution sculpt or if there could be a problem with the mesh, or object scale which is a problem also in UV unwrap.

Anyway, could try smart UV unwrap that should give larger patches. That way paint brush bleeds just some UV islands instead of around every face. Circle selecting some areas and unwrapping those might also be an option, also using different materials so that the UV’s can overlap and use another image to paint on.

Those should give larger UV islands, more texture pixels for the bump detail, and also with higher than 8 bit image for bump should together give much better result.

Apart from the problems with bump and the previously commented, it’s very good. Not just as a first. Nice design, simple presentation, painterly look, composition seems to work for presenting the model like that and leads the eye.

The clay version should have the same resolution as the original so it would be easier to compare by switching between the two.

Thank you all so much for your valuable feedback!

@Photox: No I never tried freestyle, but now that you mention it I think it would fit really well in this case! I just have to figure out how to do it in Cycles, I’m still a bit intimidated by the node editor… 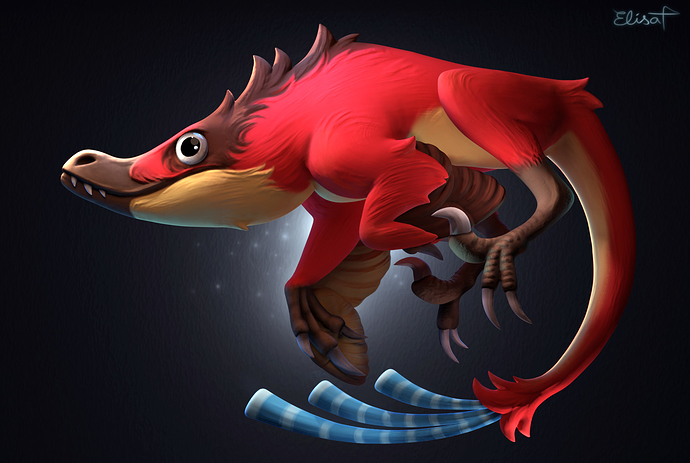 I applied a couple of small changes:

There are still some small spots that don’t blend in that well because they are separate on the UV map, but that is because of the crappy unwrapping & retopo I did in the beginning and I won’t do that mistake again. I will also take JA12’s advice and create more materials in the future.

I’ve gotten several complaints about the wings, and I totally agree that they look too anatomically different. I didn’t realise it while I was working because I was so focused on modeling after my sketch. I won’t change them now because I’d have to re-model them from scratch, but I will make a note to keep things simpler & more readable in my future sculpts.

Great, love this 2d painterly style, could be straight out of a children’s book.

It looks like you modeled it kind of flat in order to get this look, or am I mistaken ?

And I think the colors / lighing are great.
How did you achieve this “paint” look ?

Great, love this 2d painterly style, could be straight out of a children’s book.

It looks like you modeled it kind of flat in order to get this look, or am I mistaken ?

Actually it’s not that flat, I tried to keep the anatomy accurate - the ‘flat’ look comes from the light sources, which are mostly positioned in front and behind the model. 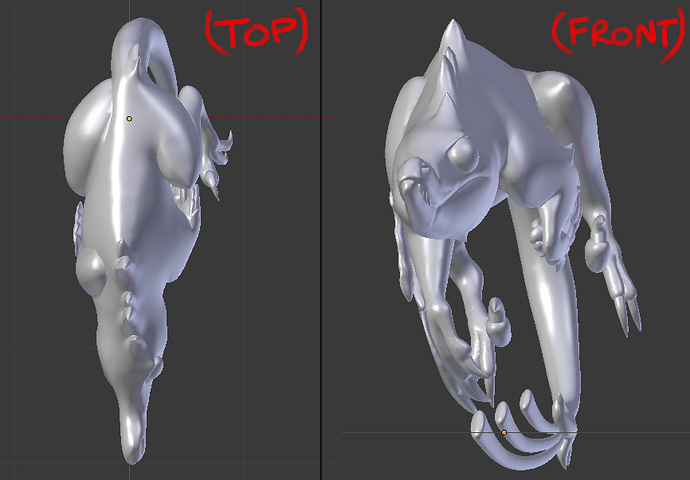 (As you can see the left side is also missing an eyeball and some details…which doesn’t matter since it was only meant to be seen from one side :))

I love it And I think the colors / lighing are great.
How did you achieve this “paint” look ?

Thank you! The effect comes from a painted base texture with a bump map on top - here is what they look like separate:

I really like the style and colors of this render. Well done sir! Look forward to seeing more work from you.

I’ve thought a bit about how you could improve you already really good sculpt/render. And I think some of the confusion regardig the arms and legs mentioned earlier happens because by looking at your render we can’t immediately tell how this creature moves. Even though I guess this was never ment to be animated, I as a viewer want to have at least some indication of how this thing moves. Right now it’s floating in the air and I don’t know if it’s doing a jumpy walk, if it’s crawling or climbing somehow.

I think this could be achieved by giving the creature some context. After a while looking at your render I thought the creature could be holding on to a twig or something. To show you what I mean, and I hope your not too pissed that I did this, I did a quick paintover: 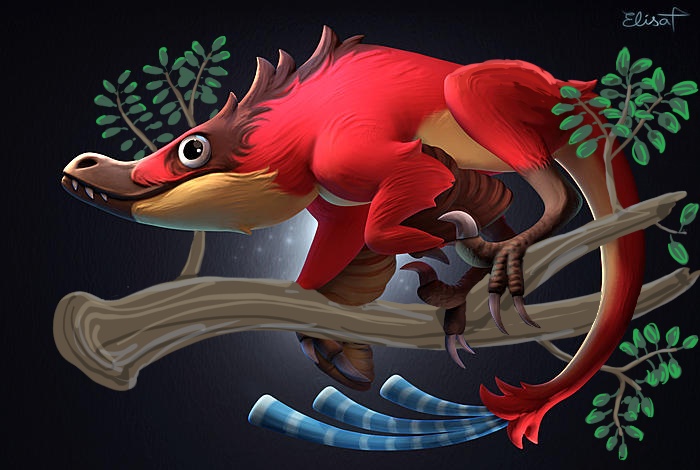 Given your fairly decent sculpting skills I bet you would make a great stylised twig in a similar style as the creature. Of course you would have to adjust the arms and legs again so the pose would fit the twig and feel a bit more natural than my shitty scetch. I think this could furthermore improve the already great presentation of your model. Some green leaves would complement the red feathers in a nice way. Of course it must not be too distracting.

You could make the upper leg a little more round to continue the arc that the tail makes.

I hope you find my advice helpful and I’m courious to see if you make something out of it. Have a nice day and have fun sculpting!

Wow thank you so much for your detailed feedback!! And for putting the time into creating a paintover, that is awesome and I greatly appreciate it.

Ok, I see what you mean now that the pose doesn’t show a clear action. He is actually supposed to be sort of hunched in a mid-air jump, but the lack of a ground/surrounding context makes it difficult to figure out.

But your idea actually works surprisingly well, with him sort of perching on the branch, it looks like he’s ready to pounce at something! I will give the branch a try, see how it turns out

Maybe I will make the leaves behind his head a bit darker so it isn’t too distracting.

I’m glad you liked my idea and I can’t wait to see what you make out of it!