I just need a nudge in the right direction here. I have a couple blocks with words “knocked out” of them which I want to glow, but as it is now there is no distinction between top and sides so the cut outs completely disappear. 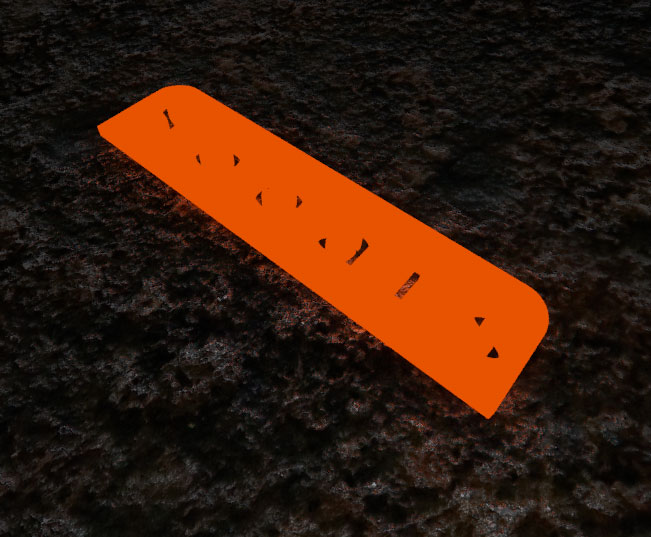 could you describe more what you did? to me it looks like you did boolean a text with geometry… that can cause many problems and is maybe not the best way to create what you eventually want to create. Maybe make a screenshot of wireframe view with all edges on. and maybe tell us more about about what the final result should look like.
Think it is easy to solve

[edit] if you only use the emission shader you will not have any shading an it looks flat. you will need some more shader nodes and maybe other things like vertex colors, more highres geometry etc. to make it.

Thanks so much for chiming in.

Couple more shots of where I am at now: 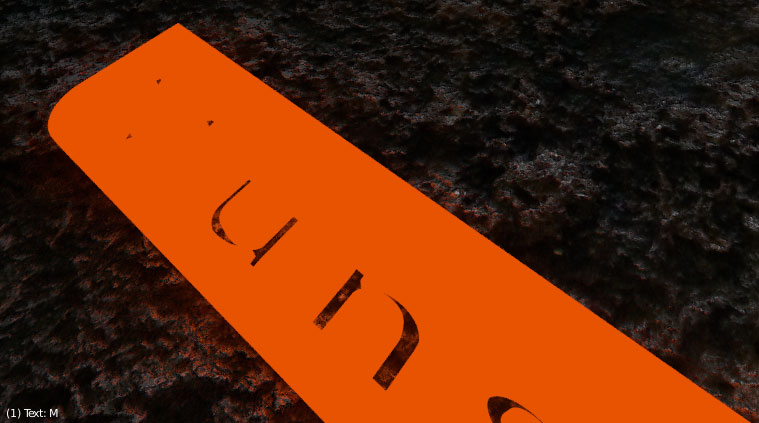 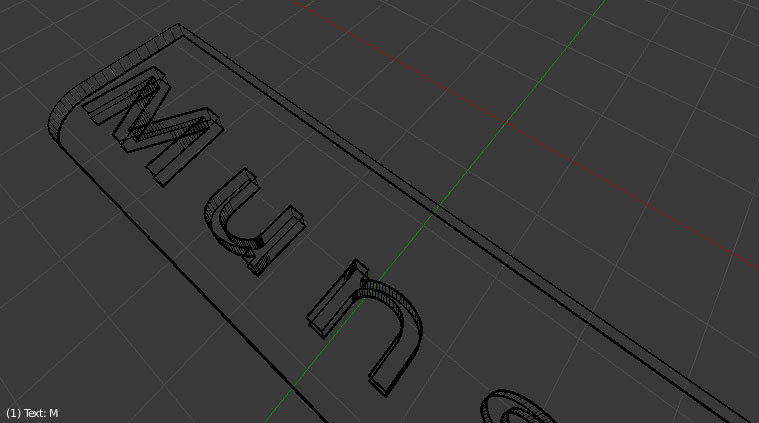 Material is a Diffuse BSDF and (orange) Emission fed into a Mix shader, output to Surface Material output.

End goal is for this to look like red-hot molten metal or iron.

Maybe add in the pointiness shader node to get the edges to turn dark - sort of like when iron cools off the edges are darker first. 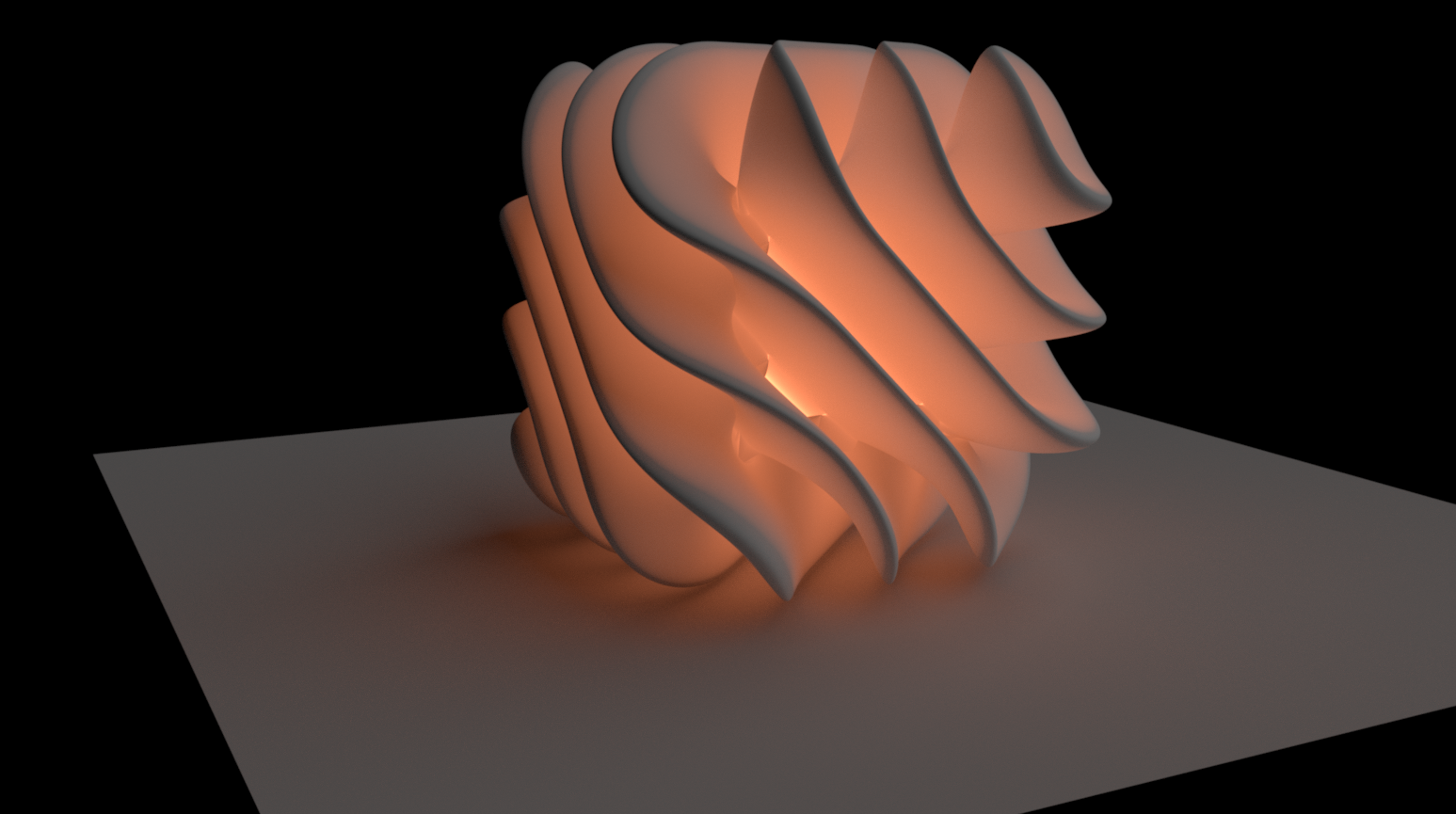 A new Cycles geometry attribute allows for new effects. Derek writes: So Sergey has been working on a new attribute for the geometry node called Pointiness. It can be used for many things like dirt maps simple AO and making random glowy parts on your...

than you realy need to play more with your shader nodes and for more detail you need more geometry detail and or an uv unwrapped mesh to create detailed edge glowing texture masks. It is a little difficult to describe if you are maybe completely new in blender what i don`t know. Hopefully not to confusing.
Some little advice i can give is: make your base geometry look more like molten metal… maybe use sculpting with dyntopo enabled. Molten metal does not have that sharp edges.
Another thing you can play with is to create a shader. Ad a material and use a Diffuse and emission shader mixed by “mix shader” node.
For the mix factor input try some procedural textures like noise and so on.
And one more… if you have a realy nice highpoly geometry try to us dirty vertex colors in vertex paint mode as aditional mix factor (node is called “attribute”… all you need is to type in the vertex color layer name) with maybe a new black emission shader. Or you could play with fressnel, pointiness or layerweight nodes as mix factor on a good geometry.
hope i do not confuse to much but there are lots of ways to do things…

This is what I came up with. Somebody else might can come up with something better.
Well seems it don’t work well with darker materials. 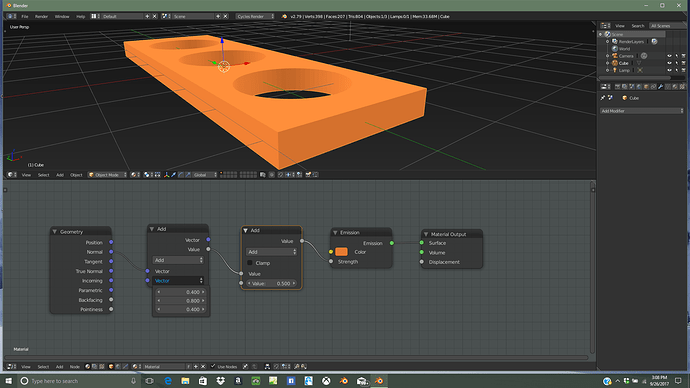 @ AFWS that certainly works in terms of making the knock outs visible, but it also destroys the “glow”.

(…)End goal is for this to look like red-hot molten metal or iron.

The problem is not the emission shader… it’s a mixture of the shader and the mesh.

Incandescent objects don’t have the same temperature all over the volume. Some parts cool down faster than others, and show different intensities of radiation.

The tipical solution here is to use either pointiness, AO or a curvature map. The exact correct approach is far more complicated, but also possible.

In general, a point on an object cools down to the temperature of their neighbour points, but at the same time, the neighbours do the same. If the point is at the surface, the area exposed to other temperatures influences the energy that the point can emit. Lower temperatures from the surrounding make the material to cool down faster, and to emit less radiation.

In your scene, a red-hot molten material needs to show where it cooled off, based on the the exposed area to critical conditions to its state.

Making the hard edges a bit darker will give you that look of red-hot metal cooling down. The best would be to use a osl script for the exposure factor, bake it, and then use it as an input of a color/intensity ramp.
(pointiness is enough if your mesh allows it. There are osl options, but I haven’t seen any directly aiming to this, but common AO/Curvature tracers can do the trick)

I’m also a beginner at materials but here is an simple node setup for a different look. 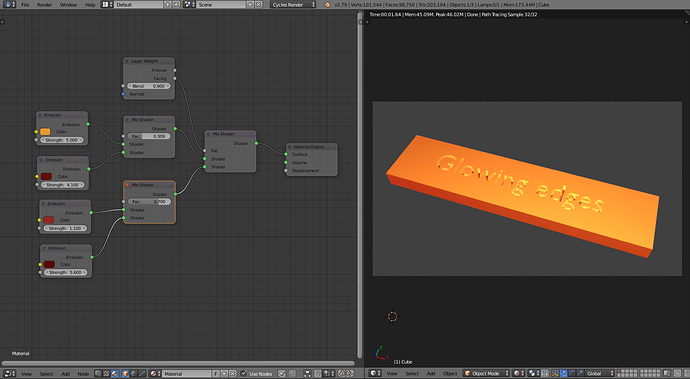 Rickyblender, thank you for sharing that link. I am going to have to study that volumetric method. It looks really cool.

If you look at red hot iron, it is still reflective. I think a mixture of emission and glossy would work better since the edges of your mesh would pick up specular highlights (like the edge of the bar in this image).

Also as others have said - you need variation in the colour/temperature over the bar. You could use the ‘black body’ node if you want the colours to be accurate for a given temperature. 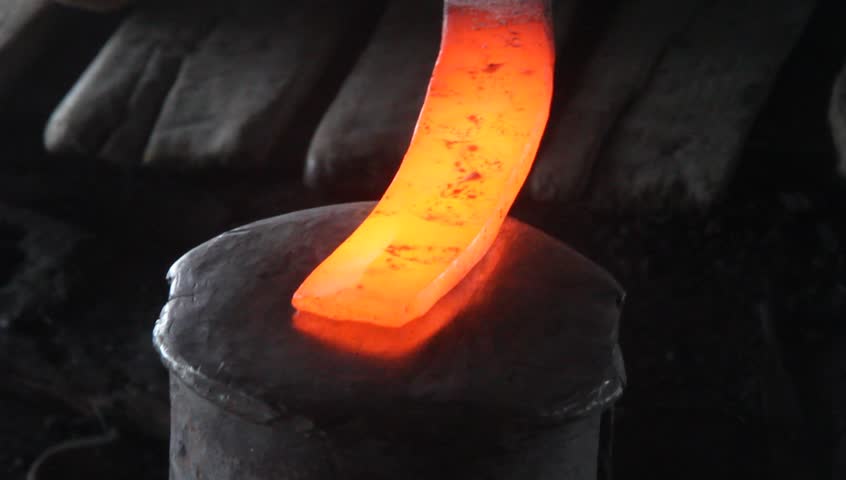 Try something like this (the dark parts probably need tweaking a bit - but it might give you a good starting point). Tons of great ideas. Thanks everyone!

mooney, I really like the look of your experiment…but I cant seem to reproduce it at my end. My cube looks dark orange and the edges of the black slag are very hard, not soft like yours. 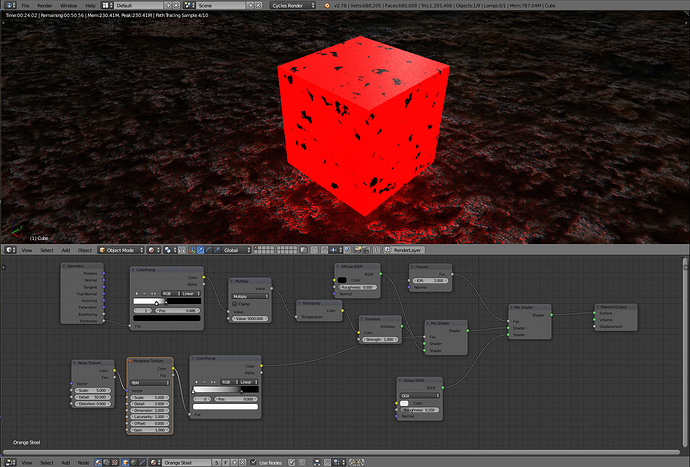 You need to change your top colour ramp from Linear to b- spline. Also the pointiness feature relies heavily on your geometry. Your cube is a different shape to mine - so your end result will look different.

Ah, thanks so much. I see now how the min/max on that one really sets the red/orange/yellowness of it.

You setup works great for simple shapes but seems to come unraveled on my extruded pieces.

Whats next for me? Custom textures?

no, simply do some extra loop cuts on the geo where’s needed (near & around edges) - use pointiness

Got my cube looking more like yours, but same material applied to the extrusion is messy. 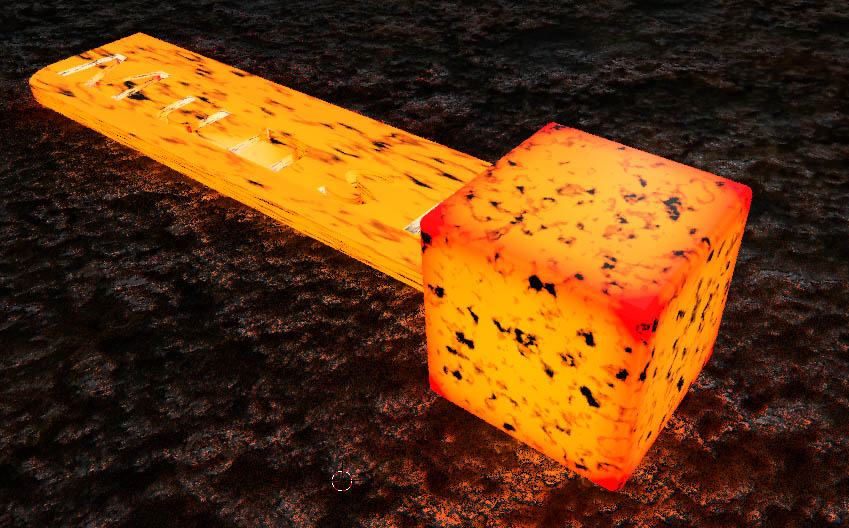 You can use the Vector transform node to transform the texture from object to world space. That will stop the distortion. 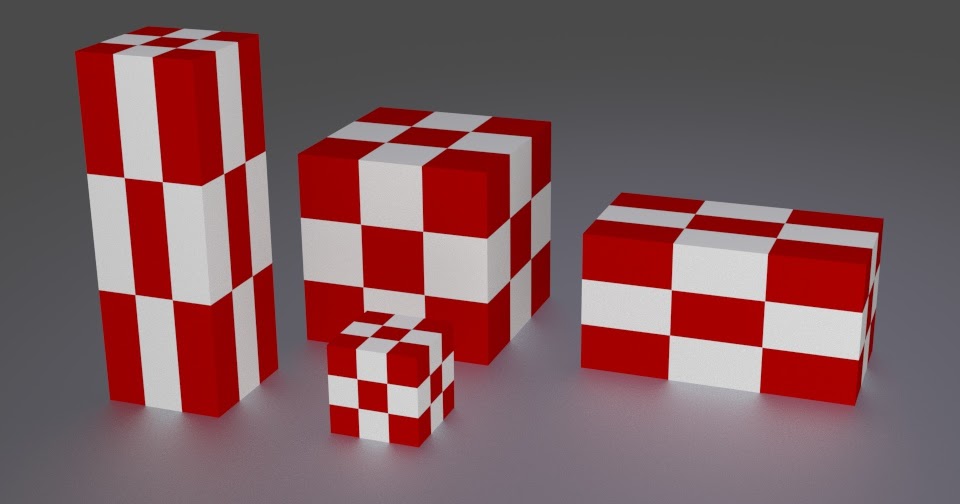 Either that or UV unwrap your object. 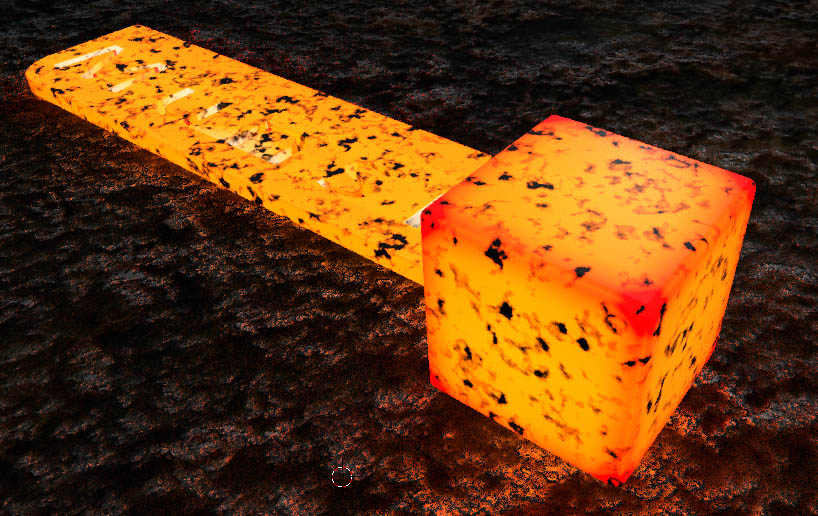 That sorts out the slag effect. Now just need to figure out how to get the dark edges on the extruded parts (without resorting to hand-made textures…which for this scene would be crap load of work).

(…) Now just need to figure out how to get the dark edges on the extruded parts (without resorting to hand-made textures…which for this scene would be crap load of work).

OSL can give you nice results. I personally use this script a lot for this purpose. It gives far better results than the pointiness, and if you need it, you can bake it.

Thanks for that. I gave that a try and it does help to darken the knock-outs but it doesnt do anything for getting the dark edges we need.