See attached pic’. It shows my IK chain setup and the X limits on the femur (top leg bone).
(The bone is locked ‘Y’ to stop roll. No limits on ‘Z’.) You can see the X-limit red-line in the
top left image.

When I move the target up, the IK ‘seems’ to be ignoring the X-limits set on the femur.

Messing with ‘Stiffness’ has no obvious effect.

Limits are controlled via the IK panel shown right? Not by adding a ‘Limit Rotation’ modifier to the bone?

I don’t imagine it’s this broke. So I’m missing something. Can someone please clue me in. 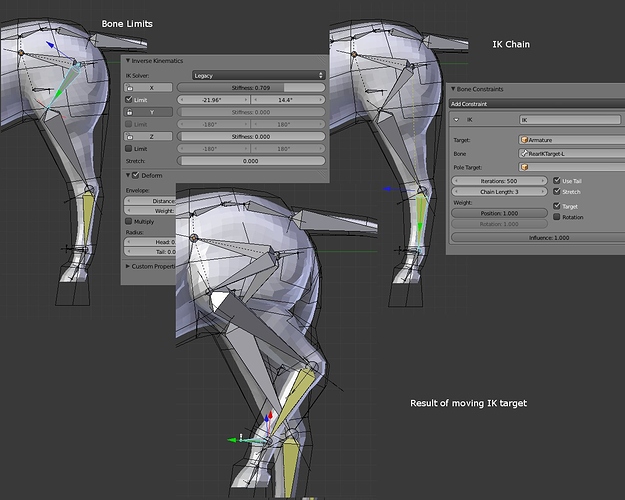 Is it rotating in the Z direction? as in out away from the body?

That was it. I thought not, as the movement was very slight, but clearly it was enough to provide the
solver with a solution.

Now I’m wondering why I didn’t try that earlier. I’m learning a lot trying to rig this model.