While watching the first installment of David Ward’s Island Tutorial, I noticed that he said that for some reason, you can’t use normal maps in compositors. He instead recommended baking the texture to an image and using a simple Image or Movie texture as a bump map. This, of course, requires extra time to bake and extra file storage, and you need to re-bake if you change the texture.

However, if you look at his node setup, he is not passing any value to the (blue) Normal attribute of the Output node. Naturally, this seemed to be the issue to me, so I tried the following addition (selected nodes): 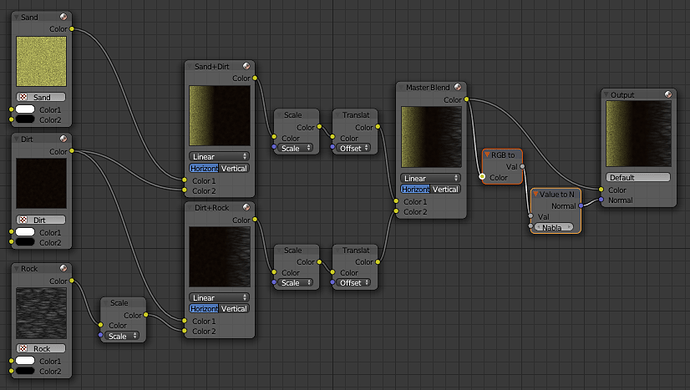 (If you can’t see, I basically connected my final image node to an RGB to BW convertor, then to a Value to Normal node, then passed the resulting Normal to the Normal input of the Output node.)

However, even after turning normal mapping all the way up to 5.000 in the texture settings, this still doesn’t have an effect. I’ve tried increasing the quality and varying the texture space as well (it’s currently set to “TextureSpace”).

I’ve also tried a second texture with the setup: Texture node of original texture outputs Color to Color input of RGB to BW node, whose Val output is passed to the Val input of a Value to Normal node, which in turn passes its Normal output to the Normal input of the Output node. Same result.

My questions, then, are

Does anyone have an idea?