I’m just blown away with all the amazing pictures people do here. I’ve been following Blender Guru on how to make an interior so I could recreate my living room. But it is harder then expected.
Why can’t I get enough light in my scene?
I have an image outside the windows with emission.
I have a sun shining through the windows, tried many many angles.
I took away the wall to the left so the light from the enviromental texure could shine into the room.
But it’s not enough. This image is rendered on 2000 samples and still looks, noisy and dull. 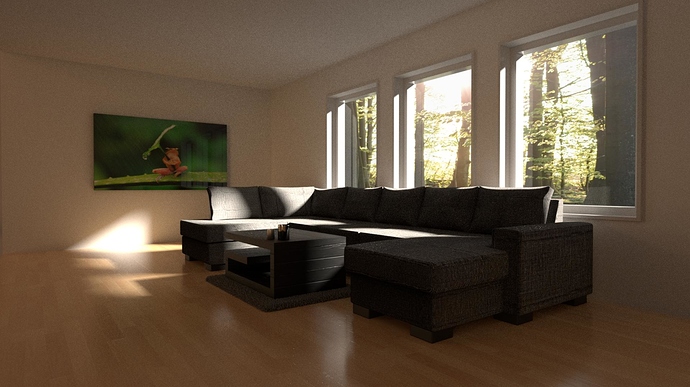 Looks right to me given the HDRI lighting the scene. What you may want to do is increase the exposure of the camera and switch to filmic if you haven’t already. The outside will burn out completely, but that’s normal/more realistic. Give the walls and ceiling some texture, that tends to camouflage somewhat any splotches you’d get from using denoiser. Remember that without reflective caustics the shiny portion of the floor will not contribute at all to lighting. In such cases I do a lightpath node “If seen by diffuse, reflect the full albedo as diffuse” so that a lot less energy is lost for GI. Also I tend to only use multi importance sampling only for the sunlight and main room surfaces, not for furniture or dark surfaces (although I’m not 100% I’m doing something right or wrong here).

As CarlG said, that’s normal. There is just not enough light - the amount of light should be increased. The ground outside on a bright sunny day gets around 100 000 lux of light, while inside on the same sunny day away from the window there will be only around 100 - 300 lux on the floor and even less in shadows. Our eyes adjust very well and it is not noticeable, but in reality, the light energy can differ even as much as 1000 times. It is usual in interior photography to cheat and adjust the windows to still have detail with HDR photography, so often in CG the same would be done ignoring the reality. So it’ OK to do it without too much overthinking. You can use Light Paths node to set up world material to use one source for lighting and another to be visible by the camera.

this is what exposure is for. turn it up.

You should check out filmic blender.

Turning up the exposure and use filmic was manageable.
But why turn off MIS? It’s only purpose seems to be to take away some noise.
The lightpath node is just rocket science.
“If seen by diffuse, reflect the full albedo as diffuse”
In my floor material I have to add a lightpath node, maybe, not even sure about that part.
I would really like to see an example of that, and MartinZ suggestion of one light for the camera using Light Paths.

Turning up the exposure and use filmic was manageable.
But why turn off MIS? It’s only purpose seems to be to take away some noise.
The lightpath node is just rocket science.
“If seen by diffuse, reflect the full albedo as diffuse”
In my floor material I have to add a lightpath node, maybe, not even sure about that part.
I would really like to see an example of that, and MartinZ suggestion of one light for the camera using Light Paths.

This is one way you could set up the windows and HDRIs:

You can of course use adjustments to the same HDRI. Having two files might not make much sense in some cases. Transparent BSDF node in the ‘Glass’ material is important in this case since Glass BSDF would change the rays to Glossy and Transmission rays. It is also less complex this way and should avoid unnecessary calculations so it’s all good anyway.

I did notice having Light Paths node in materials might slow things down, or at least it used to. I haven’t tested it in a while. I have tried using Light Paths node to only sample big textures in first few bounces and then switch to uniform color. Intuition would say, it will need less calculations, so it should be faster, however the actual results were the opposite - renders took longer. This was before AO bounces feature existed. I would use caution faking reflective caustics with Light Paths node. there could be a number of ways to use it for this purpose so I would test rendering times before using it for a long render to see if a particular method is working as it should just to be sure. However, Light Paths node is definitely no rocket science and it’s worth playing around with it for a couple of hours to understand how it works.

When setting up your scene, bear in mind that the so-called “practical lights” – things in the frame which we know “emit light” in the real world – might not actually do so. Or, certainly, they are not the primary source of illumination.

The classic example is a dungeon that’s supposedly lit by torches on wall sconces. People try this (on CG and on film or video) and wonder why they have a dark picture. If you walked onto the set of an actual photo-shoot you would find the room filled with off-camera lights, possibly including geled spotlights which are shining on the torches!

In your scene, the sun is acting as a practical light, manifested in the various bright spots of illumination on the furniture and as reflected in the floor. But the sun does not (have to) illuminate the room. Furthermore, the various lighting effects that are attributable to sunlight could be mimiced (say, in a theater) by carefully-shuttered spot lights. As long as the final effect is convincing, and consistent, it really doesn’t matter how you actually do it.

Use the de-noiser. It’s new, and works great!
And then correct it in post. That’s what the RGB Curves node is for. 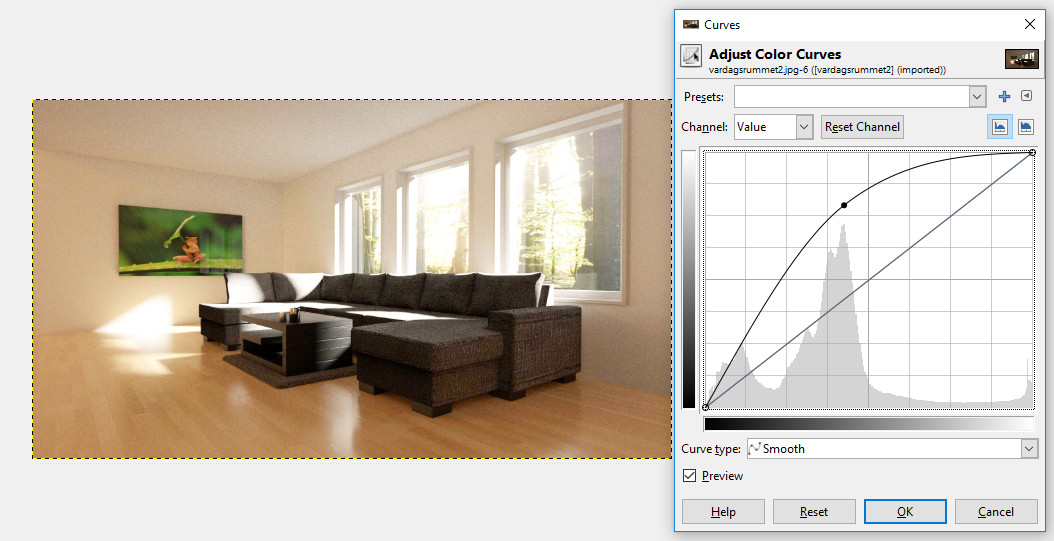 But why turn off MIS? It’s only purpose seems to be to take away some noise.
The lightpath node is just rocket science.
“If seen by diffuse, reflect the full albedo as diffuse”

I’m not 100% sure, but from my experiments it seems that if MIS is turned on it kinda gets prioritized. So dark or otherwise insignificant surfaces that doesn’t help transport light much have it on, they have the same priority as the significant surfaces you really want to transport light. 100 samples divided seems worse than 100 samples on try prioritized surfaces. At least, that’s my theory on it, and I use it a lot if I need to fake a lot to help out on the noise situation (like 30+ ceiling spotlights, which Cycles hate, you need to spend time optimize the scene and fake stuff to help it out to get a clean enough render in acceptable time).

The diffuse trick is just that, a trick. As mentioned, use it with caution. It doesn’t produce “accurate” renderings by any means, but it helps brighten up the image in kind of a natural way when glossy caustics noise is just too much too handle and you turn it off which ends up in a way darker image. After your final shader (could even be a tile/grout combo) pass it through a Mix Shader slot#1 with a Diffuse Shader in slot#2 with factor Light Path/IfDiffuseRay. Not rocket science

Test01 - Glossy caustics, 2 diffuse bounces, lots of dark diffuse surfaces and highly glossy. MIS is turned on for everything. 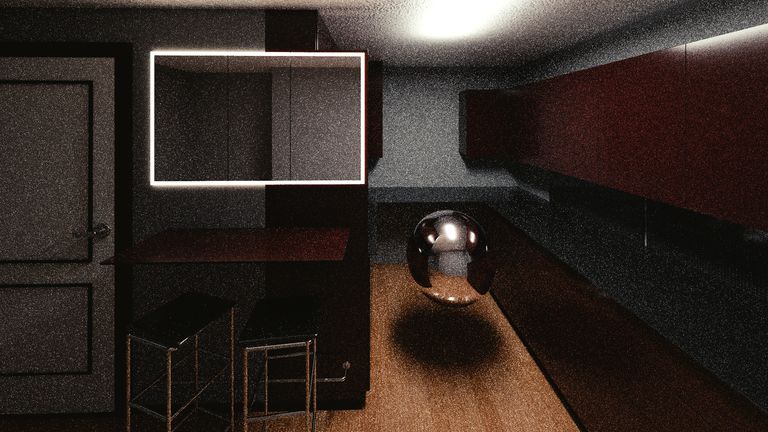 Test02 - Turning off Glossy Caustics to reduce the noise. Note how much darker the image becomes, but much cleaner. 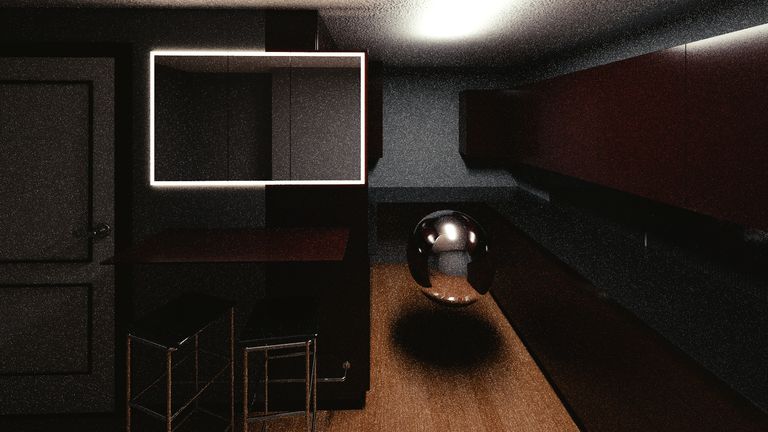 Test03 - Increasing the Diffuse Bounces to 8. It adds brightness, but it’s still 8 Diffuse only, glossy is completely ignored. 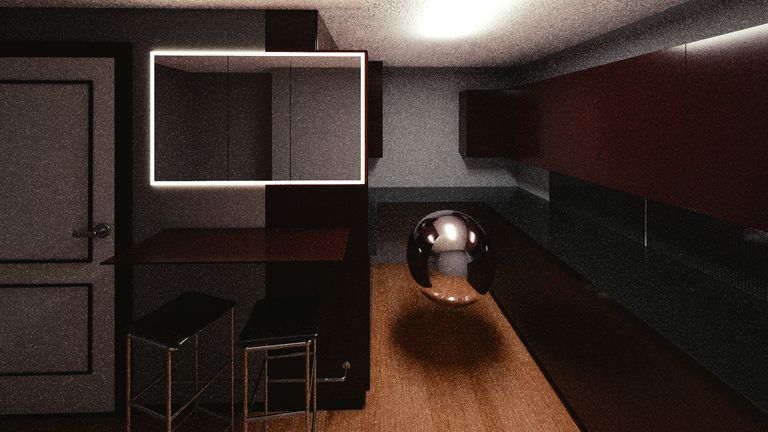 Test04 - Now I utilize the Diffuse trick. Result is not the same as glossy caustics would be, but it brightens up the image significantly and adds some more color bleed (controllable by what diffuse color you use for the trick) - but with a lot less noise. 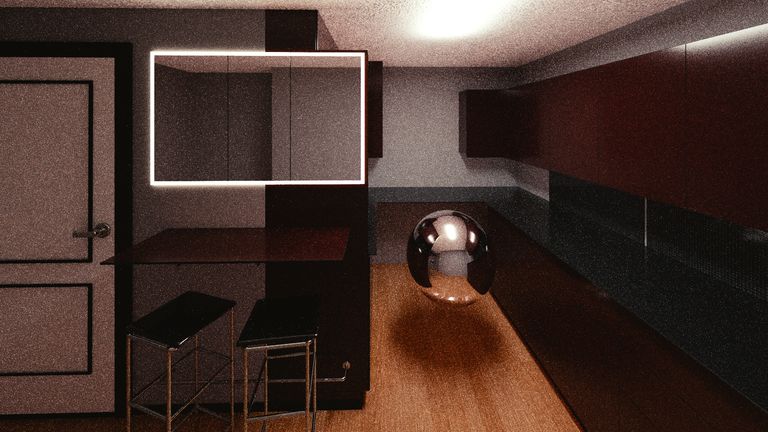 Test05 - Now I turn off MIS for everything except ceiling and floor which are the main light transporting surfaces. A few other materials had it already turned off since I took some objects and materials from another project that I’ve already tried to optimize. This isn’t the best scene (image is downscaled to 40%) yet because I’m not helping GI any with other fakes yet (ceiling area lights, direct light only lights etc), but there is some noise reduction in the floor and ceiling where it is easier to spot, with little difference elsewhere. 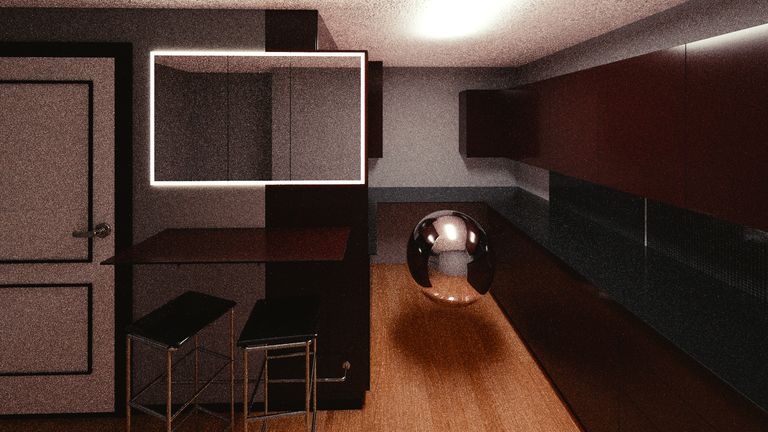 Test06 - So this is just the “rocket science”

Fake as hell, and use with care, but I find this trick to speed up my renders significantly compared to brute forcing reflective caustics. 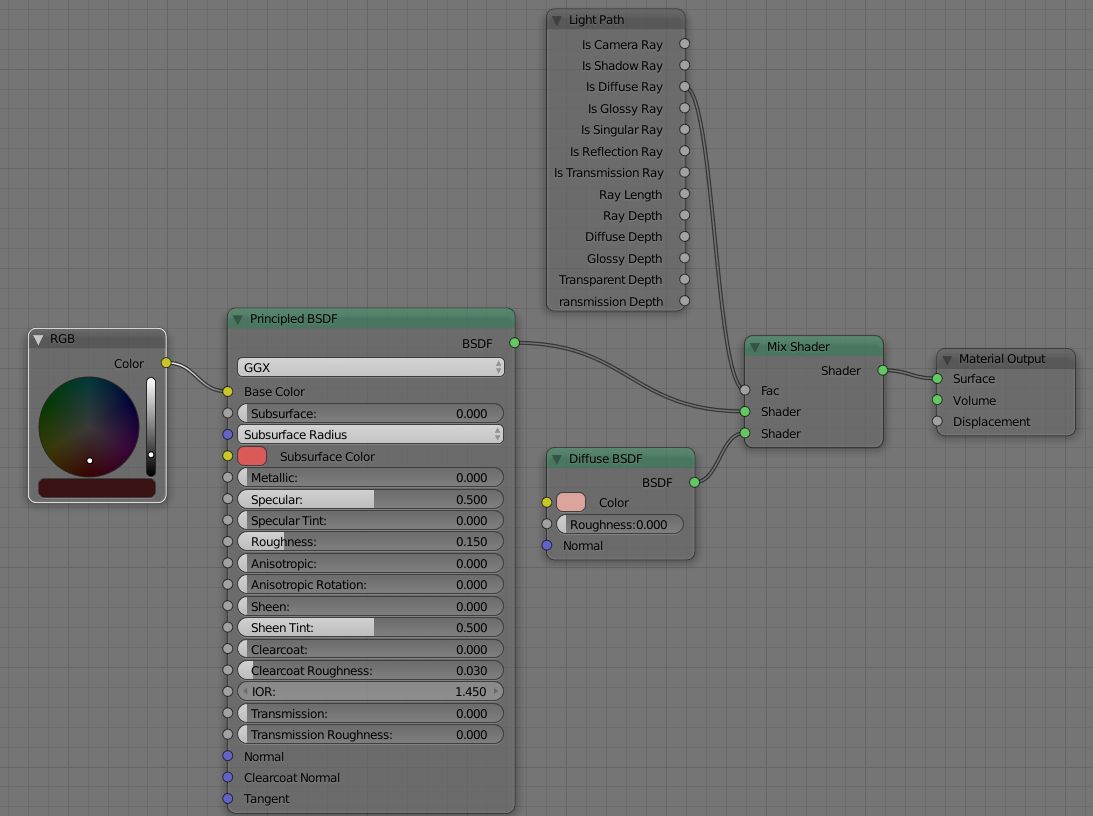 These was rendered using only 100 samples without any noise reduction, but downscaled to 40% for forum use. Closed room, but forgot to turn off MIS for the world. Btu again, not 100% sure if it would do much in this case.

wow, so many great answers. Thanks alot. I’ve studied them all.
The tutorial about filmic was really interesting.
Tried denoising but the smallest value just smeared everything together.
I guess there is more work behind your pictures than I anticipated.
I must experiment more with the Diffuse trick and double enviroment, I hope I can post an improved image by the weekend.