Around middle of last year my interest in 3D re-sparked and after looking at options, I downloaded a copy of Blender and worked my way through some tutorials, etc. As 3D characters and animation has always been my main goal, I then started to create my first character in Blender.

Mostly going for a Disney/Pixar stylised type look, the main aim is for her to be believable rather then realistic.

This is still very much a WIP, shaders are still mostly basic, there’s no textures other then a very early start diffuse map on the face. The basic colours are about the only thing I have largely settled on. 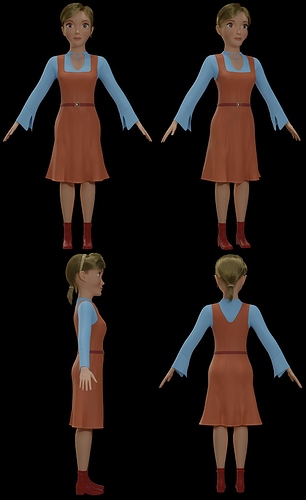 Been spending ages on the hair lately, it’s not even close to the style I really wanted, but about the best I can do which is still animated via hair dynamics. Both the arms and the lower part of the dress will be animated via a cloth sim.

Since doing these renders, I’ve noticed an issue with the top of the hair when viewed from the back and I’m starting to wonder if the hands are too big.

Size of hands seem to be OK. Feet are a little bit small. But due to the cartoonish style and the oversized head/eyes the proportions are artificial, anyway.
The hair on the back of the head looks a bit strange. There should be much stronger hair growth behind the ears and on the neck. The knot would be a bit higher. Hair strands would go from all directions to the knot, even from the neck below. Looks at the knot in the attached picture (not perfect either). Try to find some reference pictures. 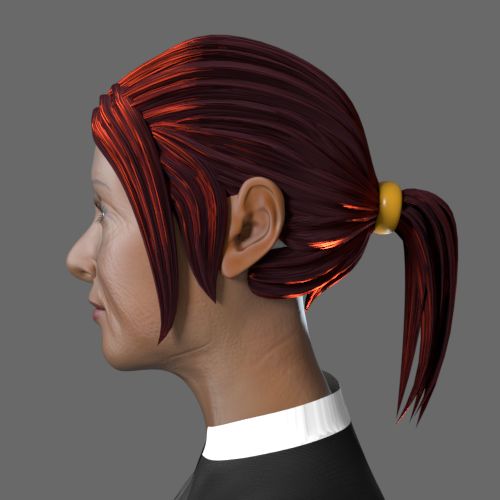 Hi Seawolf, thanks for the reply. I sort of wanted the hair knot to be lower down, since what I really wanted was no ponytail at all and for all the hair to be longer and more free flowing, but then animation is a big nightmare. I had added more hair behind the ears and neck line, but yeah need to add some more and hope that it sims OK.

In did in the past think the feet were a bit small, but then length wise if I made them any bigger it just seemed like really big feet, based on her overall height of around 160cm. Maybe it’s more a case of the feet not being wide enough.