Lol have you guys even used redshift? its 100% a pathtracer. Just because it uses biased methods to make it converge faster does not mean its not a path tracer.

Yes it does, show me in the Redshift manual where you can turn on brute force for reflections, refractions, area lights, volumetrics, etc, etc. If Redshift has the settings to turn off all biased methods, I will gladly retract my statement. As I said before, GI is only a very small part of the pathtracing algorithm (diffuse reflections). I suspect that you don’t know just how pathtracing works?

Yes it does, show me in the Redshift manual where you can turn on brute force for reflections, refractions, area lights, volumetrics, etc, etc

They are always brute force. What other magical method do you think they are using?

If Redshift has the settings to turn off all biased methods, I will gladly retract my statement

Path tracers can be biased…

This explains how sampling is done: https://docs.redshift3d.com/display/RSDOCS/Unified+Sampling?product=houdini

This explains some of the biased techniques: https://docs.redshift3d.com/display/RSDOCS/Noise?product=houdini

The only place you can specify otherwise is in GI, nowhere else. I don’t think you understand what biased rendering is. Please dont high road me without doing the research yourself and just making assumptions. I use redshift every day at work.

They are always brute force. What other magical method do you think they are using?

Well, ray tracing methods, which magical methods do you think path tracers use?

Path tracers can be biased…

Yes, but it doesn’t make them any less of a path tracer and still very different from a ray tracer.

This explains how sampling is done: https://docs.redshift3d.com/display/RSDOCS/Unified+Sampling?product=houdini

This explains some of the biased techniques: https://docs.redshift3d.com/display/RSDOCS/Noise?product=houdini

This is not helping your case. All renderers use some form of importance sampling. Notice how Redshift concentrates the sampling on the edges. This is a particular issue with ray tracers, that is antialiasing and noise. Before ray tracers would take multiple samples for each pixel and “jitter” them to get antialiasing. Doing this on the entire image will take a lot of time, it’s smart to sample the edges more and not the interiors of objects where there is less variability. Path tracers are already taking multiple samples per pixel (many, many more samples) so they get this for “free”.

The irony here is that nowhere in the Redshift documentation are the words “path tracer” (I searched). In fact the very introduction of the manual states:

Emphasis is mine. I very much doubt that the Redshift dev would ever call their renderer a “path tracer”. They even don’t mention path tracing in the whole section on “brute-force GI”.

The only place you can specify otherwise is in GI, nowhere else. I don’t think you understand what biased rendering is. Please dont high road me without doing the research yourself and just making assumptions. I use redshift every day at work.

Exactly, only one place. I don’t know what “high road me” means, you were the one who stated the Redshift is a path tracer. I already did the research for Vray, why would I do it again for anther renderer that I don’t care about or use? But I did, and I didn’t find any evidence that shows that either Vray or Redshift are path tracers.

I wrote my own ray tracer on my trusty Amiga back in 1995, like a lot of people did then. I still have the printout of the code somewhere. I followed the early papers on path tracing that were coming out in the late 90’s and even wanted to write my own but didn’t get around to it. When I discovered Indigo in around 2006, I was like, yay finally we have path tracers now. I even built my own Beowulf system to render on, only 3 nodes but I was able to get over 260,000 samples per second on it.

Could you please stop your incorrect off topic spam or post it somewhere else? It gets annoying.

Yes we should ask the moderators to please split it off into another thread, and you can tell me how incorrect I am. 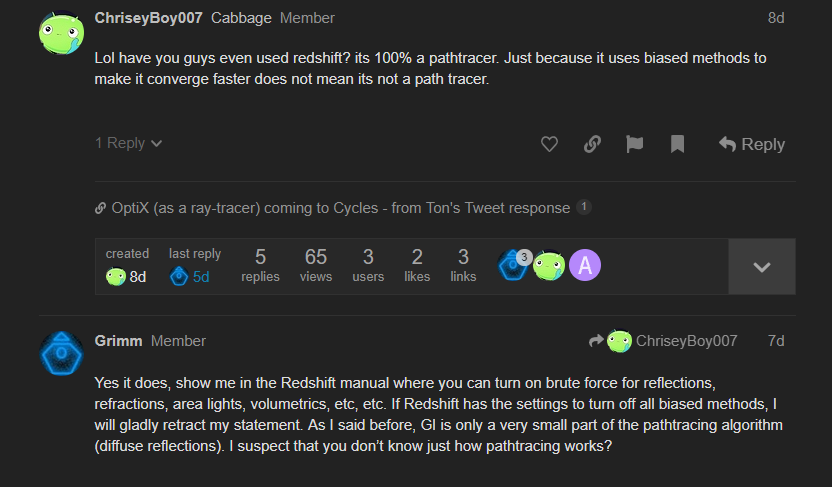 So, even if I use just patch tracing mode/brute force without secondary rays interpolation, is that still hybrid renderers? also, based in experts I know, all pathtracing integrators have bias introduced somehow, trick to speed up things. Funny logic of yours

I think that we are arguing over nomenclature, mostly my fault as I don’t explain myself very well. I blame the pathtracing devs on the “Unbiased” vs “Biased” as they needed a term to separate the pathtracer from a raytracer. At the time it seemed to be a good term, but in retrospect it probably wasn’t.

For me I don’t look at it as absolute, a renderer is either “biased” or it’s “unbiased”. I view it more as a relative term where raytracers have a lot more bias in them than pathtracers do. When all is said and done you have to put limits on both rendering types, otherwise they would be too slow. I think these terms have had far too much abuse to be useful anymore.

You need to give me some more information on what you mean by “secondary rays interpolation”? Are you talking about reflection and/or refraction rays?

I guess my question is, can you be 100% sure that when you turn on “brute force GI” that both Vray and Redshift are turning off the raytracing methods for calculating things like soft shadows, blurred reflections, etc? Because for me “brute force GI” equals diffuse reflections only, not anything else. And nothing in both of the Vray and Redshift manuals says anything different.

Here is a definition of GI from wikipedia:

Theoretically, reflections, refractions, and shadows are all examples of global illumination, because when simulating them, one object affects the rendering of another (as opposed to an object being affected only by a direct light). In practice, however, only the simulation of diffuse inter-reflection or caustics is called global illumination. 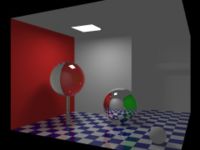 Global illumination (shortened as GI), or indirect illumination, is a general name for a group of algorithms used in 3D computer graphics that are meant to add more realistic lighting to 3D scenes. Such algorithms take into account not only the light that comes directly from a light source (direct illumination), but also subsequent cases in which light rays from the same source are reflected by other surfaces in the scene, whether reflective or not (indirect illumination). Theoretically, reflect...

You need to give me some more information on what you mean by “secondary rays interpolation”? Are you talking about reflection and/or refraction rays?

For redshift it’s only for diffuse bounces, that is all. Everything else is traced independent of what is selected here. I’m not sure how V-ray works though i’ve never used it before, but as far as I know V-Ray does some really unique things for speed.

Lol have you guys even used redshift? its 100% a pathtracer.

Haha, you made my day, first time ever someone dares to call Redshift a pathtracer,
Redshift is a raytracer using many techniques but not pathtracing …
And for information I have a Redshift and a Octane license using both side by side in Maya.

Hey thanks for replying with the information. Can I ask where you found it?