office scene w/ monster (or something) 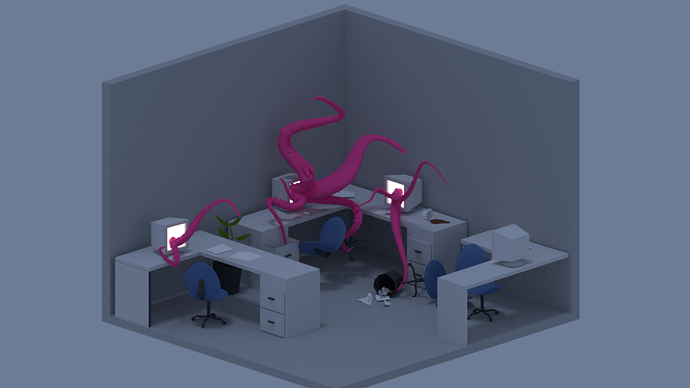 heres something that im making for the ap exam actually…
so, what do you guys think? should i add a broken glass texture to the monitors, or leave them be? any other suggestions?

You’ve done a pretty good job. I like the simplicity of your office deisgn, it kind of reminds me of an 60s or 80s office setup. You have a good idea monstrous tentacles coming through computer monitors (no pun intended). And I like the simple details you’ve added. Like the waste basket with the crumpled up paper spilled over.

In my opinion I don’t think the cracks in the monitor is needed. It gives more of a mystic feel. I would advise changing the background to a some kind of complimentary color, so that you’re office scene doesn’t blend in so much with the background.

It might be a good idea to add a third tentacle to the ones on the left. It’s good to have an equal amount of odd numbers for all the tentacles. 5 for the center ones, and three for the other two. Zoom out a little bit to give your office an border for the top and bottom, since your scene is cut off at the bottom. One of the tentacle arms isn’t really visible. If you can, try to make more so.

Also, you might want to add some generic picture frames on the wall to fill in that empty space. To make the scene a bit more interesting. And last, I would try to experiment more with use a combination of 3 colors to make your scene more visually appealing.

I hope this helps. And, again, you’ve done a good job. Keep at it.