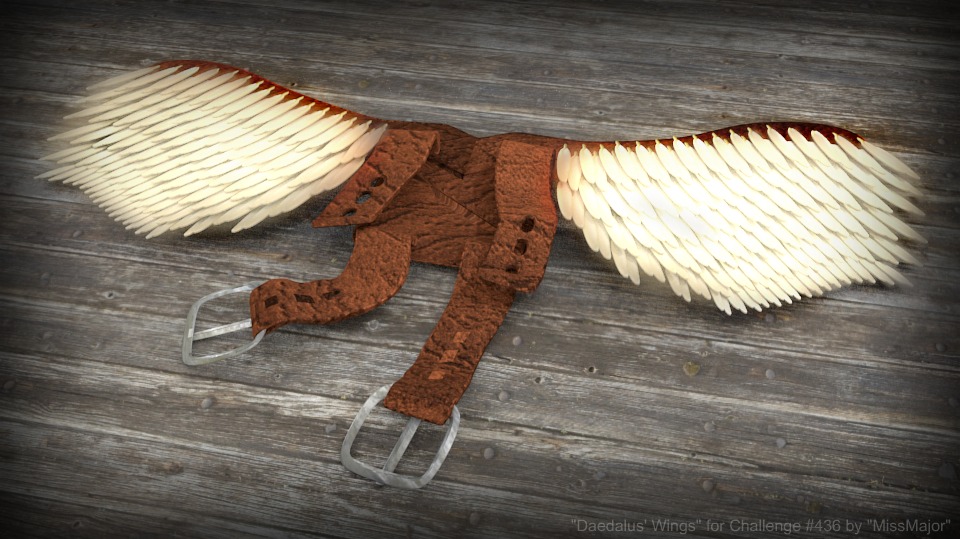 I was inspired by the old Greek myth of Daedalus and his son Icarus. Daedalus created two sets of wings made of bird feathers and wax, one for his son and one for himself. Even though Daedalus warned Icarus of flying too high into the sun, but Icarus didn’t take precaution. According to this myth Icarus flew too close to the sun, and the heat melted the wax which made his artificial wings fall apart.

His invention was Daedalus’ “Dream of Flight”.

In doing research I didn’t find specifically how the wings were built other than Daedalus used wax to hold the feathers together (like how the wings were attatched to the body, etc.). So I kinda designed my own version of Daedalus’ wings that feature a leather base and leather straps that may be held together by what kind of resembles belt buckles.

Please critique anything you see

I think the belt and buckles are too large in relation to the wings - I cannot imagine a person to scale with the buckle using the wings as they are. I would scale up the wings and the length of the leather straps.

I’d have to disagree. I see what you mean, but I scaled the buckles up only so it wouldn’t have seemed as modern. It is based on a Greek myth so I see this style most fitting. Thank you for the input anyway

Okay, if that is your opinion. But just to check, import a makehuman mesh and set it to scale to your wings apparatus, and see what I mean then.

I’ll still take what you said into consideration