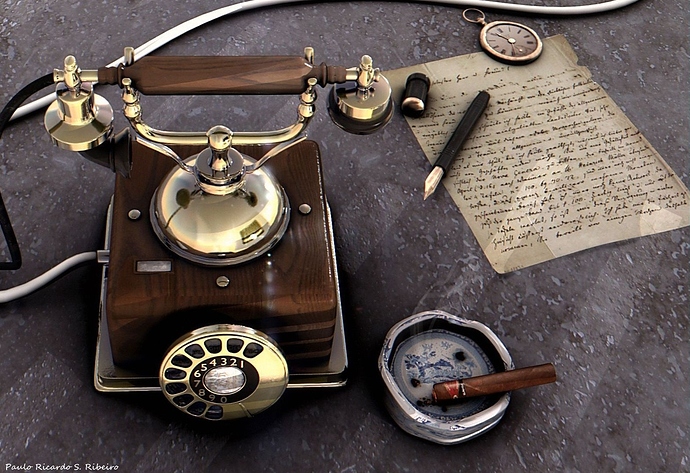 Internal Render? nice work! I thought it was cycles

thank you very much for the comments!!

It seems that you cannot do wrong in whatever you set your mind on! Great work!

Good work, Ricardo! How much time did you spend?

Thanks man! In this I spent about two days.

nice job. the watch looks a bit flat, but besides that its pretty good.

Looks Great! well done! one thing…I believe that cigar is lit from the wrong end

The lighting levels also might need some fine adjustment.

The human eye always zeroes-in on the brightest and highest-contrast portion of any scene, then it wants to trace a roughly circular path in a like manner, thereby to take in the relevant parts of the whole scene and to be lead back to where it started. Right now, the telephone grabs attention and holds it, when several other parts of the scene (the mis-lit cigar, the letter and what it says, and so on) are intended to be important parts of the overall effect. The color temperatures can also play. The lighting on the phone is warm and inviting; the lighting on the ashtray is cold. Is that the scene-designer’s intent?

In a darkroom, I’d be “dancing in the dark” by the enlarger, burning and dodging to bring the levels around. Wouldn’t take long to do and you could digitally do that now.

Also be especially on the lookout for things like opaque, detail-less blacks. For instance, the lower front edge of the telephone “isn’t there.” The boundaries of whatever-that-grey-rectangle-is also are not there. The handset cord ceases to be round because there is no specular detail (e.g. of a cloth wrapping) to offset what has become a completely black hence non-existent area. What happened to the lower-edge of that golden watch? Looks like somebody coated it with carbon black.

And watch for escape-hatches, like the brightly-lit telephone cord (BTW: is that accurate for the period??) that shoots up in a diagonal line and invites my eye to zoom right out of the picture. (If you give the eye such an escape-route, it just might take it.)

“Fine points?” “Nit-picking?” You betcha! The devil is in the details, and the more awesome this picture looks

the harder you have to pick over it to get it even more awesome than it already is.

Thank you for the all comments and suggestions!

Thanks for the great tips, will help considerably in the next work