Only reflection from one side of glass material

I’m doing an architectural visualization and I’m using a glass material for the balconies and a fence, but I get strange effects that doesn’t look good. It seems that the glass from the windows on the facade that are behind the balconies and the glass fence get some strange distortion!? Is this really correct behavior? Compare the two images.

Anyway it doesn’t look nice and I wonder if it possible to prevent this? I only want reflection from the front of the balconies and the glass fence like the sky. Are those glass panes physically plausible = do they have thickness? Or are they just flat, single-sided planes?

If it is the latter, avoid using any kind of refractive shader. Otherwise Cycles will consider anything behind that flat glass pane as being inside a solid block of glass, because there is no backface to terminate the glass object.

It’s just flat single-sided planes. Refractive shader? I’m just using the nodes on the image. Is there a way to alter them? Can you or someone else tell how I should do to solve this problem and still get reflection from the sky in front of the glass?

Use a mix of «Transparent» and «Glossy». As the factor you’ll need a fresnel with the IOR inverted for the backface.
Here’s an example of the setup (thought in the transmission frame, you only need the transparent):

How to create clear plastic? (Cycles)

OK, I have set all the nodes minus the Trancelucent nodes. I get reflection on the surface, but not transparent! Can not see through. Any suggestions where I can alter the values to also get transparent? Many of the nodes looks and woks in another way compared with the one on the image. There are so many places to set values and when you connect some of them, the box to alter the value is closed.

The Glass and the Refraction shaders (and the new Pricipled shader with transmission enabled and an IOR <>1) are refractive shaders. All of them require the use of physically plausible objects - and a glass pane with only one surface just isn’t.

As Secrop pointed out, use a glossy transparent mix, e. g. here.

Thanks for the help! I got a much better result now! But is it physically correct? I was thinking of fresnel reflection when you look at a glass from an angle? Do I get this kind reflection on a real building like the 3D-model on the image?

But is it physically correct? I was thinking of fresnel reflection when you look at a glass from an angle.

Actually, the physically correctness ended with you using flat planes as glass panes… Despite its representation in the viewport, a polygon plane is not an infinitesimally thin volume with a front and back side, but a physically impossible entity that only ever has one side (which is indicated by the face normal) and doesn’t exist when viewed from the opposite side. So, there will always be the element of “fake” in whatever you render based on this.

However, you didn’t explain which node example you ended up using. If it was the one I linked to, you still have angle-dependent reflection in that, too. The Layer Weight > Facing node does something rather similar than Fresnel (in fact, I believe it is just a “normalized” form of Fresnel equation), but has the advantage of working correctly with Transparent shaders without having to jump through complex mathematical hoops.

I used the node setup you linked to. When I ask if it was physically correct, I meant more if it looks realistic from the outside looking at a building and if I get this kind of reflection on a real front of a window glass? I think it looks good and improves the realism in the render. But I don’t want to deliver a render if this isn’t looking real!?

I don’t see anything unrealistic concerning the reflections in your render.

When I ask if it was physically correct, I meant more if it looks realistic from the outside looking at a building and if I get this kind of reflection on a real front of a window glass?

That setup, the one using the Layer Weight, will make the glass more reflective than a typical pure glass. For architectural renderings, it will depend greatly of the light intensity of your enviroment. In some situations this works quite well, specially if you want to tune in the reflection amount for artistic control.

If you want a more realistic glass (at least with almost correct values for reflection intensity), you’ll need to use this setup instead: 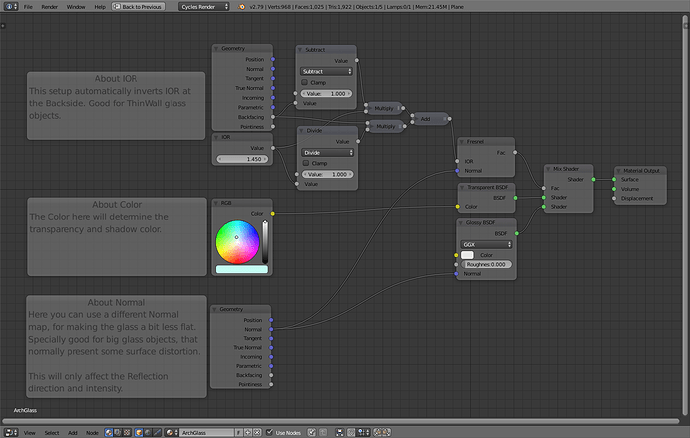 Thanks for the new setups for window glass!