So i’ve got guns mounted on stubby wings that rotate around the hull of this spaceship. I’m trying to make some sort of particle-bolt effect and just throwing point halos out of the emitters isn’t really doing it for me. So I make a little subsurf’d box and attach it to the emitter and halo it up and it looks ok.

Then I realize that the particles are always oriented the same way, no matter which way the emitter is oriented as it goes along its orbit. This doesn’t work, since the “shot” is shaped to the shape of the gun; it needs to start at the same orientation as the gun/emitter and stay that way while the gun/emitter goes on turning.

The “source” meshes for the duplivert being a child of this whole rotating mess doesn’t seem to help anything, despite the fact that they ARE rotated the right way at any given point. Adding an appropriate rotation IPO to the particle meshes just causes them to spin AFTER being shot, of course.

Other things i’ve tried (from vaguely similar problems I found searching) include the ROT button on the dupli page, the VECT button on the particle page, and at least one other thing that I’m forgetting at the moment.

I’m throwing in a screenshot of the whole rotating section and the related hierarchy in case it helps; the emitters are all selected currently. (They’re all anchored at 0,0,0 like the Rotation Core empty, too, in case that’s relevant.) 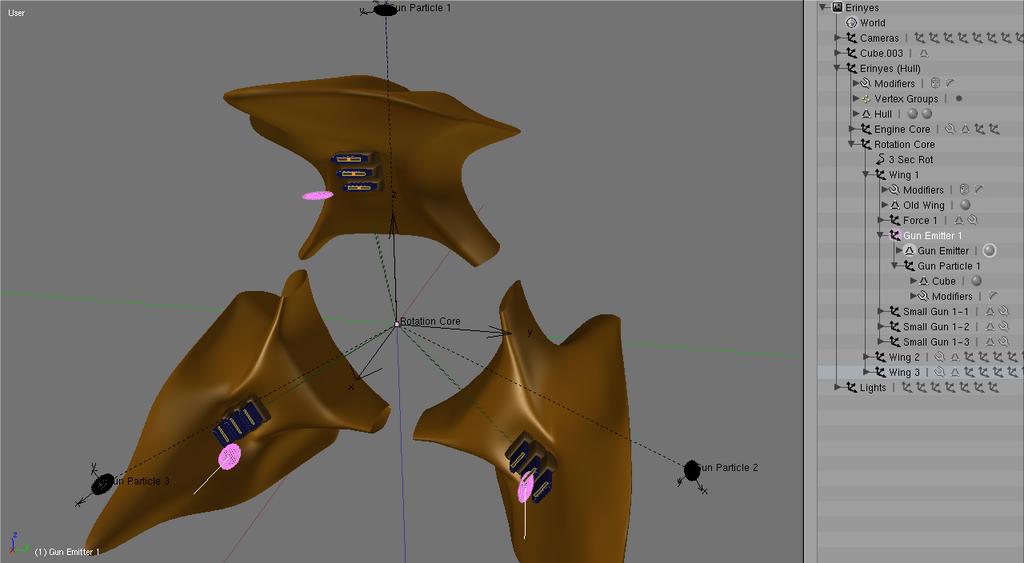