welcome to the Killer fashion modeling thread ,inspired from the awesome cube modeling this thread is about sharing ideas and blends .

The idea is to have a gallery of fantastic ready made clothes ,shoes and accessories along with hair styles for blender users to use .

so now let the challenge begin: you’ve thought of the cubes know its time to step up and take it one step further.

design any from the following : 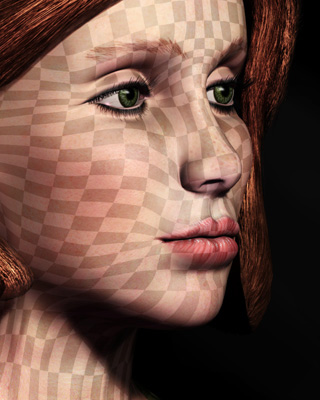 This is a head I modelled in the spring of 1996. The grid shows the UV paramaterization of the NURBS surface.
NOTE: These instructions work in most programs with a “loft” or “skin” function. There are many ways to model a head, and this isn’t necessarily the best for you, but the basic technique of lofting a surface from radial cross-sections remains valuable for building a variety of organic surfaces, including arms and torsos and other forms. - jeremy
HOW TO BUILD IT
This tutorial shows how to build a head out of one continuous NURBS component for the whole head, rather than using multiple components blended together.

HeadWire.gif392×613
There’s more than one way to skin a head. I made the ears a part of the same surface as the rest of the head. This is tricky to do, since you have to define the edges of the ears going “against the grain” of your parameterization. Just building separate ear objects and sticking them on could be quicker and easier and look almost as good. Instead of single-component heads, a lot of people blend together several different surfaces to make a head.
Single-component heads update more quickly during animation than blended-together heads, and have a few other advantages that make me choose them. Any area of the face can be addressed to add wrinkles or dimples to a facial expression. A continuous patch surface is guaranteed to look smooth and continuous, with any type of texture mapping, displacement, rendering or animation, while blends aren’t always 100% seamless. Continuous heads can easily be moved between application programs as an iges file, whereas the construction histories or relational modeling that make blends possible are more fragile and can’t be translated between programs.
Another issue to think about is the direction of your curves. In this head, they run up and down, becoming opened at the neck (very useful!) but all pinching together at the top of the head. There are other approaches.
One other way is to make all the curves radiate from the mouth. You can even make curves starting in the mouth twist back around the head to open at the neck, as in the example below:

This mouth-centered model, a more professional, animatable approach, is also available from turbosquid if you click the image.
This character is modelled with curves starting in the mouth, and coming out around the mouth all the way down to the neck. (It is basically a tube, in which one end is the mouth, the other is the neck.) The grid shows where the U and V direction curves move through the surface. Since you don’t get quite as much detail in the eye area this way, it might not be the best way to make a highly detailed NURBS human, but I use geometry like this for many character and creature heads. It’s much quicker and easier to make the mouth keyposes and animate the head talking with this kind of model.
blenderrenegade (blenderrenegade) May 17, 2008, 6:56pm #4

this is an excellent method of modelling a face

I break into your soliloquy merely to warn any new Blender users who may happen across this thread against attempting to model faces using the above method.

ps:orinoco would u like to place a wager since you suspect that i might not have the examples for modeling a face using the spline and nurbs method i,m game are you? are you ready to place your money where your mouth is coz i am are u?

this is an excellent quick method of modelling a face
.
I’ll restate my warning to anyone happening across this thread: Jeremy Birn’s head tutorial is not a Blender tutorial, the tools he uses in it are not well developed in Blender, attempting to make a head model using that tutorial will not be quick or successful.

@blenderrenegade – if you have anything to show that contradicts my assertions, show it. I have no interest in your posturing. lol, indeed.

this is just stupid man this thread is about clothes thats final all i talked about is clothes some people just want to create problems just because they struggled while learning blender they want everyone else to sturgle i try and do something constructive here to help fellow newbies in making clothes and all this guy does is come and hijack this "clothing thread " you know what man i,ll just ignore you from now on mate please go and do something consturctive for example go and make tutorials or go and develope blenders code if you claim to be an expert play your part instead of hijacking a good thread about clothes be greatfull you have blender so go use it or help others use it by making something and showing them rather than being impossible please stop hating and start making stuff cheers

You posted a long tutorial on making faces, you posted again saying the method for making faces shown in that tutorial was “excellent” and then again said it was “quick.”

Do you mean me? I warn people against following the tutorial you posted because I do not want them to struggle with a method that does not work well in Blender.

you know what man i,ll just ignore you from now on mate

Be my guest. My brief is with other people who may see this thread and mistakenly follow poor advice.

fine than ,you can own this thread

I’m totally with Orinoco concerning this very poor way to model a face/head. The two methods shown above are very bad approaches.

Why do all the verticies converge at the top of the head? That’s for UV spheres and doorknobs, not heads.

Usually you want edgeloops around the eyes and mouth, as what I usually see proper heads modeled as when the wireframe’s shown. Don’t look at me, I prefer Dragons to human heads.