I’m making a feathery owl, I’m looking for serious feedback but it’s not far enough along to be placed anywhere else than the WIP forum. =) Here’s how she’s looking so far: 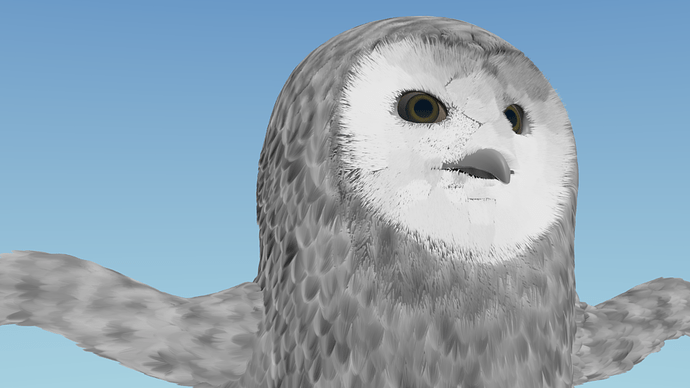 I will switch to Cycles if particle fur is integrated soon, but until then, it’s BI.

the face structure looks great and so does the hair around the face but some of the textures on the wings looks like its streched too far. Other than that great modeling!

P.S. i share your frustration with cycles im working on a wolf and desperatly wish cycles integrated hair.

Thanks for the nice comment! I was wondering about the face, I just set up the particle fur on the face last night, and wasn’t sure it was turning out well. :o But yeah I will shrink down the UVs of the wings, and try to get in some flight feathers.

Edit: It’s not set to UV mapping! Oh, well, I’ll try to figure something out.

Here’s some early work on texturing the feet: 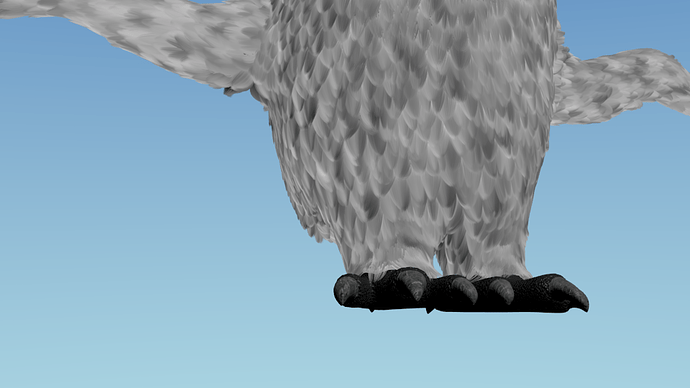 Hmmm… Not bad. I might suggest having the tips of the down on the face have a gradient alpha. Also, I’m curious about your feathering method. I tried an owl before (didn’t work out so well), and just used wide particles. 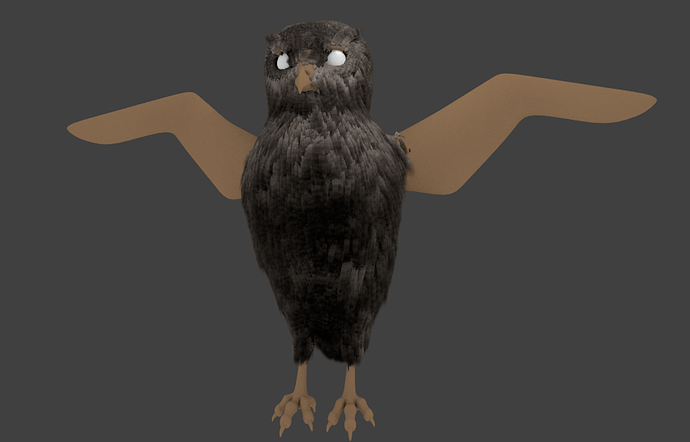 Owl tip my hat to that.

@GraphiX, I followed the same type of down used in David Ward’s feathery wing tutorial on Blender Cookie. However, your owl’s feathers seem to look better - could you give a little more info on how you did it? And I do have an alpha map on the facial feathers.

Okay, sorry for the lack of updates. There’s just too many big projects to work on. :spin: I finally got around to adding the flight feathers, and I am starting to set up a rig. 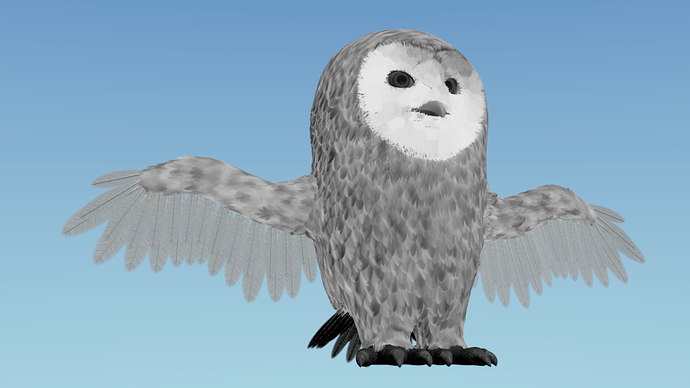 Done with armature rigging! So, naturally, I posed her. I also threw in a stick just to make it more interesting. 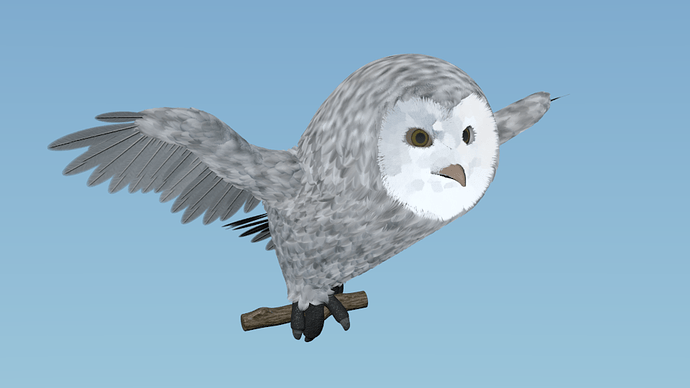 On to the face! Face rigging is something I’ve never done before, so I’m pretty excited to see how it goes! :eyebrowlift:

Basic face rig more or less complete. I added some geometry to the chest which screwed up the feathers, so I redid the body feathers, and I like them much better! They look much more dynamic, I think. I also adjusted the eyes. Here’s the render: 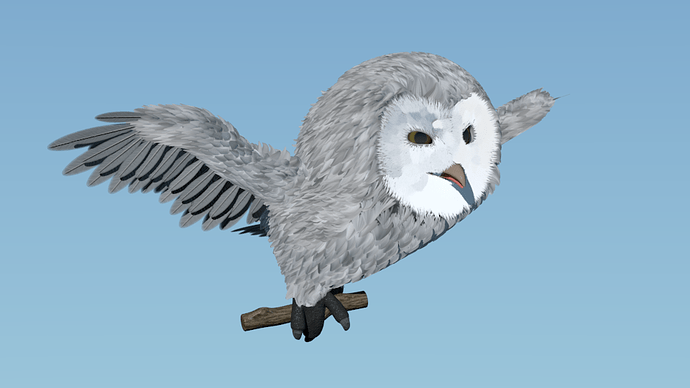 Keep in mind that I’m going for a fairly toon look, along with a bit of the Guardians of Ga’Hoole style thrown in.

Oh. My method for feathers. It’s pretty simple. I would have finished the model, but I ran into problems with the face feathers. I’m curious exactly how you did yours.

The file is too big to upload here, maybe I’ll upload it to blendswap some time, but here is a file that my method is based on. http://www.blendswap.com/blends/animals/feather-down-ball/. I just have gentler gradiants and an alpha gradient toward the tip.

I think you are doing a good job but for some reason the wings seem like they are too small. and maybe a little low on the body. also on the feathers on the bottom of the wings if you could do similiar texture to the body or some pattern on them i think it would make them look nicer too. And maybe even select all those bottom feathers and duplicate them a couple more times to make them seem more dense.
heres a pic of a owl with wings spread not sure if the species makes a diff or not

@Jeremiah, I see that you chose an eagle owl for that photo, and in fact they have by far the biggest proportional wings of any owl. But I deliberately made the wings on mine slightly smaller, it’s just a cartoon thing. I plan to use this in a cartoon-style movie soon, so, all those things you noticed are on purpose. Oh yeah, I’m not exactly following an actual species of owl. I’m making something of a cross between a snowy owl and a barn owl. @Graphix, thanks. I just did the feathers on the face as plain old fur, they’re not really feathers at all. But in real life, a barn owl’s face feathers look something like that, so I think it’s okay. As for your owl, since it is not really a tytonidae owl (barn owl) the same feathers you used all over work just fine on the face.

Here’s a flap cycle of the owl, with a “pounce” at the end:

It’s certainly not perfect but I just wanted to see how the rig worked in motion.

She looks better on-takeoff. Now, give her catch-lights in the eyes. That tiny gleam, that white dot on the surface of the eyes. Doesn’t have to be much, but it needs to be there. Next, pay very careful attention to her face: to the texturing of that circle around her eyes and her beak. Don’t let any of that go “completely blown-out white.” Lavish attention on the texture of her beak. What you are doing is … making her into a character.

Now, do be careful that you don’t wind up with a stuffed owl, which the image above this one rather resembles … unless you want “a stuffed owl,” in which case by Jove let that be the star of your show!

You may well find that “complex” effects like the full-featured appearance of her feathers might best be accomplished by the compositing of multiple effects which are separately rendered.

A very cheap yet very interesting effect can be achieved by compositing some of those effects one or two frames out-of-register with the others, when she’s moving, or with a very slight (x,y) offset or perhaps changes in blur etc., in a still frame. I remember watching an absolutely dramatic “taking off at high speed” that I later learned was done by superimposing multiple copies of the same layer, offset several frames in time, with different opacity and color-tint, all of which were timed to fade out almost immediately but at slightly different times. The shot was used as a cut-away, with the subject taking-off to the right as the camera panned slightly to the right. The next shot was an OTS shot in which the same effect imperceptibly was reversed in the first half-second. I swear the combined effect was “warp-speed,” and yet if you didn’t know to look for it you might not even recognize that it was there. It would look fantastic for a predator like an owl.

Yikes! I lost you on that last paragraph, but other than that, thanks for the useful input! Yeah I agree…I need better texturing. I’ll set about to that. As for the feathers I shall add a soft body to them and hair dynamics for the downy feathers, I just forgot to add a wind field to drive the thing.

I’m digging this, the animation is also funky. Way to go.

As it stands now, i feel the owl is an awkward mixture of stylization and realism. I would decide which direction you want to go.

I would also fix the wings if i were you.